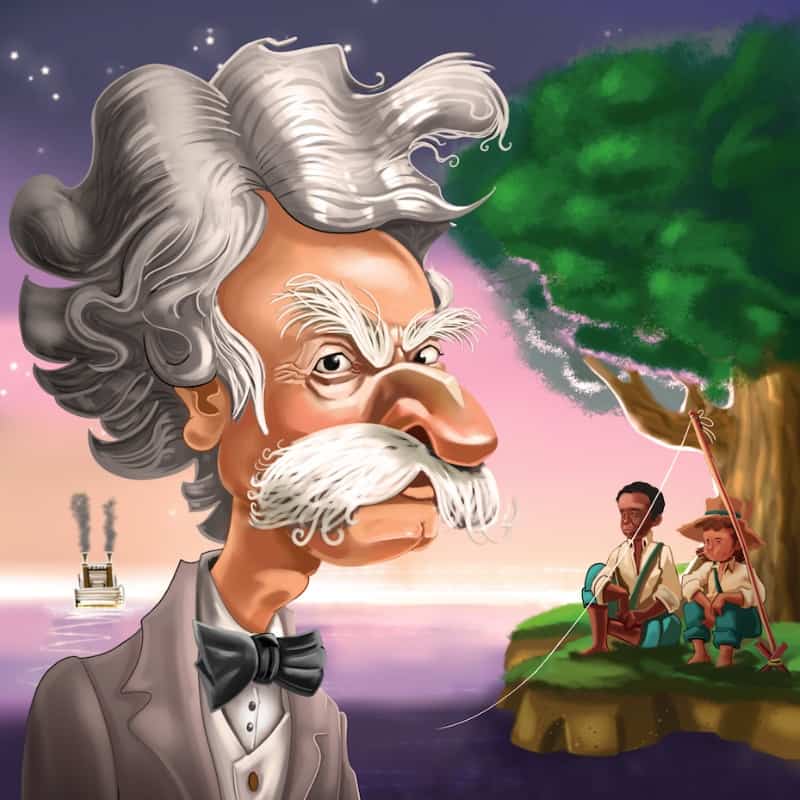 Samuel Langhorne Clemens was born in Florida, Missouri in 1835, two weeks after the passing of Hailey’s Comet. When he was four, the Clemens family moved to nearby Hannibal, and it was this small town on the Mississippi River that would shape Twain’s childhood and influence his writing, including his most famous novels, The Adventures Of Tom Sawyer and Adventures of Huckleberry Finn. Indeed, it was Hannibal that inspired the name Mark Twain in the first place: “mark twain” was river slang for two fathoms, and Sam Clemens would later adopt the phrase as his pseudonym.

Twain’s schooling ended at 11 when he became a printer’s apprentice to support his family after his father died of pneumonia. This early contact with the world of the printing press would awaken Twain’s dormant instincts as a writer, and he began to write for a newspaper published by his brother Orion. Later, a trip to New Orleans down the Mississippi River prompted Twain to become a steamboat pilot at the age of 22. This job, which continued until the outbreak of the Civil War in 1861, also inspired Twain’s 1883 memoir, Life on the Mississippi.

Twain served in the Confederate Army for a scant two weeks before deserting, finding the life of a soldier not to his liking. He headed out west, trying his hand at a series of unsuccessful ventures—gold panning, silver mining, and logging, to name a few. Turning to humor for solace, Twain wrote a series of articles mocking his failures in both military and personal life. These articles eventually caught the notice of the Territorial Enterprise newspaper in Virginia City, Nevada, which offered him a job.

In 1864, Twain moved to San Francisco to write for the Morning Call. While working for the newspaper, a New York magazine, The Saturday Press, published his short story called “The Celebrated Jumping Frog of Calaveras County.” The story’s folksy, rustic style was a hit with readers, who began to pay more and more attention to Twain’s rising star. His work writing for various newspapers allowed him to travel to Europe and the Middle East, and the subsequent travelogues he wrote (including The Innocents Abroad) only served to further his growing popularity.

In 1871, Twain and his new wife Olivia moved to Hartford, Connecticut. It was there that Twain’s writing talent and travel experience finally came together, and throughout the next 20 years, he wrote some of his most famous works, including A Connecticut Yankee in King Arthur’s Court, as well as his two seminal novels, The Adventures Of Tom Sawyer and Adventures of Huckleberry Finn. With these and other works, Twain enjoyed a reputation as the most famous writer in America, beloved by the reading public.

Sadly, Twain’s success was marred by significant difficulties in his personal life. Reminiscent of his early failed ventures in the West, Twain lost substantial amounts of money on failed projects such as his own publishing house and the infamous Paige typesetting machine; Twain invested heavily in the machine, but it had become obsolete before seeing mass production. He was forced to rely on the goodwill of creditors like his friend Henry H. Rogers, who helped him stay afloat.

Although Twain was eventually able to come back from bankruptcy and pay back his debtors in full, his later years were marked by personal tragedy. After losing two beloved daughters and his wife to illness, Twain’s writing became bitter and cynical, producing such dark works as The Man Who Corrupted Hadleyburg (1899), Twain’s own health was failing as well, and he eventually died of a heart attack in 1910—the day after the return of the very same comet that had heralded his birth.

Twain left behind a number of unpublished manuscripts, including The Mysterious Stranger, a gloomy tale (published in 1916) describing a visit by Satan to an Austrian village during the Middle Ages. This story is a stark departure from Twain’s commonly accepted image as a jovial humorist and shows his sometimes somber side.