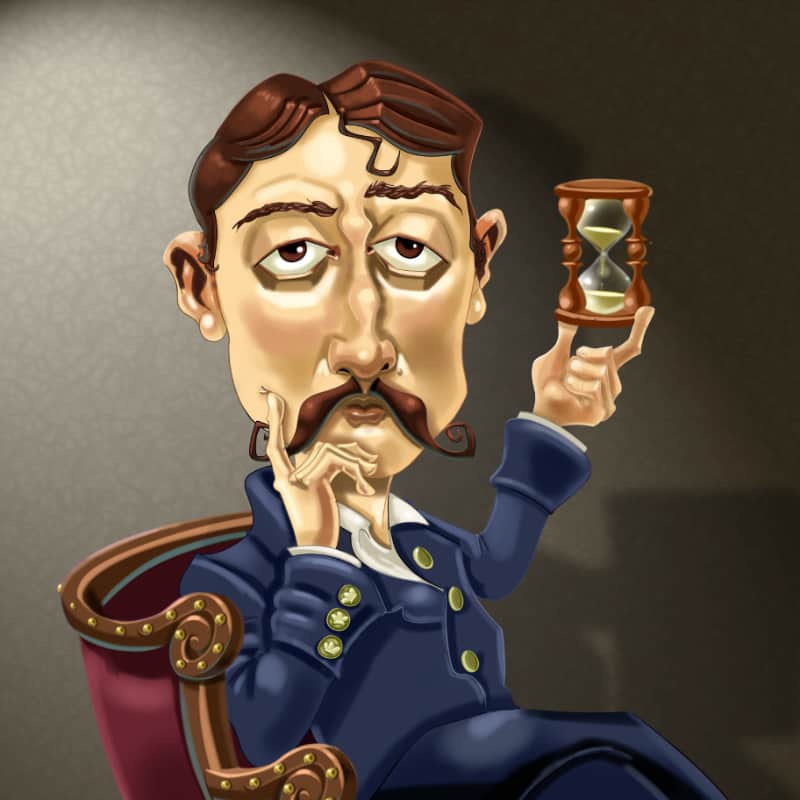 Award-winning French author whose life work was a seven-volume novel.

Best known for his epic seven-volume magnum opus À la recherche du temps perdu (In Search of Lost Time; previously translated as Remembrance of Things Past), Marcel Proust was a giant of twentieth-century literature whose extraordinary masterpiece continues to challenge and inspire readers.

Shortly after his birth, Proust was baptized Roman Catholic. Though his parents raised him in the church, Proust did not practice the faith as an adult but preferred atheism and mysticism.

He was a sickly child who often suffered from asthma attacks. He dealt with this condition throughout his life. He attended the Lycée Condorcet and performed well in writing and literature, writing for class magazines throughout 1882 and 1889 and receiving an award for his talent the year he graduated.

While at the Lycée Condorcet, Proust made friends with students whose mothers were society hostesses. Through these friends, Proust participated in the events of the wealthy and influential. These experiences inspired many details found in In Search of Lost Time.

From 1888 to 1889, Proust served in the French army. This experience provided him with content for the third volume of In Search of Lost Time: The Guermantes Way.

After departing from the Army, he studied at the School of Political Sciences and took licenses in law and literature. His writing abilities grew more formidable during his studies, and he released a collection of short stories the year after receiving his literature license. This collection was titled, Pleasures and Days (1896).

Around the time of this first publication, Proust began expanding his breadth of reading. He dove into the works of Ralph Waldo Emerson and Thomas Carlyle, which informed him of his own role as a writer. He learned that his work was to do more than entertain and to be truly successful, it needed to yield change.

From 1896 to 1899, Proust worked on his book Jean Santeuil but never finished it. Proust struggled to develop the story’s plot, yet his efforts were not in vain. The concepts introduced in this manuscript developed later in another novel; the most significant concept was the role of memory in our lives.

As Proust grew older, his aspirations of being among the high-class became increasingly apparent. However, Proust lacked the self-discipline to make much of himself, causing his family frustration. Though he refused to pick up a full-time job, he dedicated much of his time to activism between 1897 and 1899. At this time, the French government had arrested their own army captain, Alfred Dreyfus, and Proust was active in Dreyfus’ defense.

Dreyfus, a French Jew, was accused of treason for allegedly selling confidential military information to the Germans. Much of the public initially stood for his condemnation; however, many of these supporters hailed from anti-Semitic hate groups. As the trial went on, more information came out about another suspect who may have committed treason as well, Ferdinand Walsin-Esterhazy. Esterhazy was tried and acquitted, but Dreyfus had now received a guilty verdict. Dreyfus’ supporters saw deep injustice before their eyes and continually protested on his behalf.

In 1898, a released document proved the French army had wrongfully accused Dreyfus, and the president pardoned him. This series of events deeply impacted Proust, so his view of the aristocracy was more disillusioned.

Following the death of his father in 1903 and his mother in 1905, Proust reignited the pursuit of his novel. In 1905, he completed an early draft of the first volume but felt it was only entertaining. He knew this piece had to be more philosophical than anything he had ever produced.

In January 1909, Proust had a flashback to his childhood. While eating a rusk biscuit and sipping on tea, he reminisced about his early years, and this event inspired the “Proustian moment” within In Search of Lost Time. The Proustian moment is now seen in literature and films, occurring when a character recalls the innocence of their childhood that sways their current situation. A popular contemporary example of this is in the Pixar film, Ratatouille when the austere food critic tastes a dish so good that he is thrown back into his childhood, recalling a memory that changes his demeanor forever.

In 1912, Proust finally completed the first draft of In Search of Lost Time, Swann’s Way. The best publishers in France rejected the book, but a young publisher named Bernard Grasset accepted it in 1913.

Proust continued writing and received offers from publishers that once rejected him. By the summer of 1919, he released a revision of The Swann’s Way and published new volumes of the book Within a Budding Grove. In December of that year, Proust received the Prix Goncourt, a prestigious French literary award, which gave his career a welcomed jolt.

Two more volumes of In Search of Lost Time were published during Proust’s lifetime: The Guermantes’ Way and Sodom and Gomorrah. The final three volumes were published posthumously: The Prisoner, The Fugitive, and Finding Time Again. The total word count of the final edition was 1,267,069 words, all encompassed within 4,215 pages.

Proust died of pneumonia in Paris, France, on November 18, 1922. His lungs began to fail as he was drafting the final manuscripts of In Search of Lost Time. He was fifty-one years old.