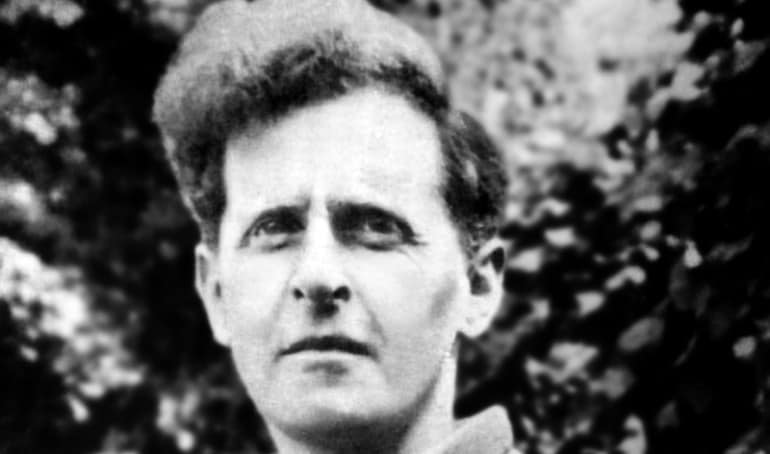 You Ought to Be in Pictures: Ludwig Wittgenstein’s Work is Featured on Big Screen

Last year’s award-winning motion picture, The Imitation Game, told the story of the pioneering British computer scientist Alan Turing (1912–1954) and his efforts to build the Enigma-decoding machine. Now, a new and already highly acclaimed sci-fi movie, Ex Machina, sheds light on another 20th-century genius (and one-time Turing acquaintance), Ludwig Wittgenstein. (The two met in 1937, and the following year Turing attended Wittgenstein’s lectures at Cambridge about the foundations of mathematics).

Focusing on artificial intelligence, Ex Machina is not about Wittgenstein per se—in fact, the topic is a better match for Turing. However, the movie’s allusions and references to Wittgenstein bring him into the spotlight, allowing the new generation of moviegoers to discover the enduring significance of this important philosopher and logician.

One of Ex Machina’s clearest references to Wittgenstein (1889–1951) is the (fictional) Bluebook, the world’s largest search engine. The name is based on the real Blue Book, a set of notes dictated to Wittgenstein’s Cambridge students in 1933 and 1934.

In fact, the Blue Book, as well its companion, the Brown Book—so named after the color of the paper they were originally bound in—later provided content for Wittgenstein’s Philosophical Investigations, widely hailed as one of the most important philosophical works of the 20th century. Published posthumously in 1953, the book analyzes the nature of language, the relation between language and states of consciousness, logic, philosophy of mathematics, and other topics that reflected Wittgenstein’s lifelong interest in language, semantics, and philosophy of mind.

Interestingly, the Blue (or the Brown) Book made no mention of artificial intelligence, which is not surprising considering that the term didn’t come into use until 1956—five years after the philosopher’s death. However, given his major contributions to logic, as well as the philosophy of language, mind, and mathematics, there is no doubt that Wittgenstein’s intelligence was real.