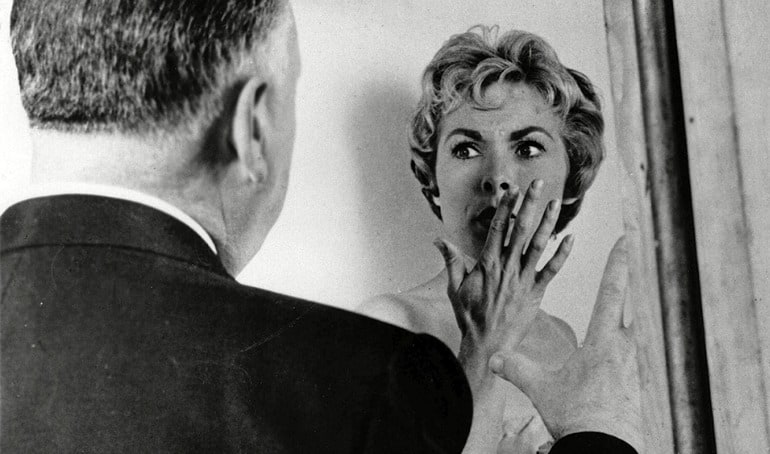 With Halloween approaching, now is a good time to remember one of the most haunting moments in cinematic history—the iconic shower scene from Alfred Hitchcock’s 1960 movie Psycho.

It shows the female protagonist, Marion Crane (played by Janet Leigh) being stabbed to death by a shadowy figure, as she is taking a shower in her motel room. The killer is later revealed to be the motel’s owner, Norman Bates (Anthony Perkins).

The memorable, two-minute scene—which Hitchcock (1899–1980) spent seven days shooting from numerous angles—does not show any graphic or grisly details of Marion’s demise (besides blood dripping down the bathtub drain and a deafening shriek). Yet, it remains to this day one of the most chilling moments in the motion picture history. Its fear factor is no doubt amplified by a musical score by Bernard Hermann; the shrieking sounds he composed aptly reflect the danger and terror Marion feels as she is dying.

The scene is the subject of a new feature-length documentary by Swiss filmmaker Alexandre Phillippe. Its cryptic title, 78/52, represents the number of camera shots and cuts, respectively, that Hitchcock did to portray the murder.

“I decided to make this film because of my passion for Hitchcock,” Philippe told BBC, adding that the shower clip “is for me really the greatest, most important, most extraordinary scene in the history of movies.”

The master of suspense that he was, Hitchcock had a knack for filming hair-raising moments. As author David Sterritt wrote in the newly-published work Simply Hitchcock (one of Simply Charly Great Lives series books), when Psycho opened, the filmmaker left nothing to chance, extending his directorial guidance to the movie’s early audiences:

“Hitchcock personally supervised, complete with instructions telling exhibitors to keep the lights off for 30 seconds after the end titles. ‘During these 30 seconds of stygian blackness,’ the directions from the director said, ‘the suspense of Psycho is indelibly engraved in the mind of the audience, later to be discussed among gaping friends and relations. You will then bring up houselights of a greenish hue, and shine spotlights of this ominous hue across the faces of your departing patrons.’”

One of them was American director Peter Bogdanovich, who attended the first press screening after the film’s release. “It was actually the first time in the history of movies that it wasn’t safe to be in the movie theatre,” he notes in Philippe’s documentary.