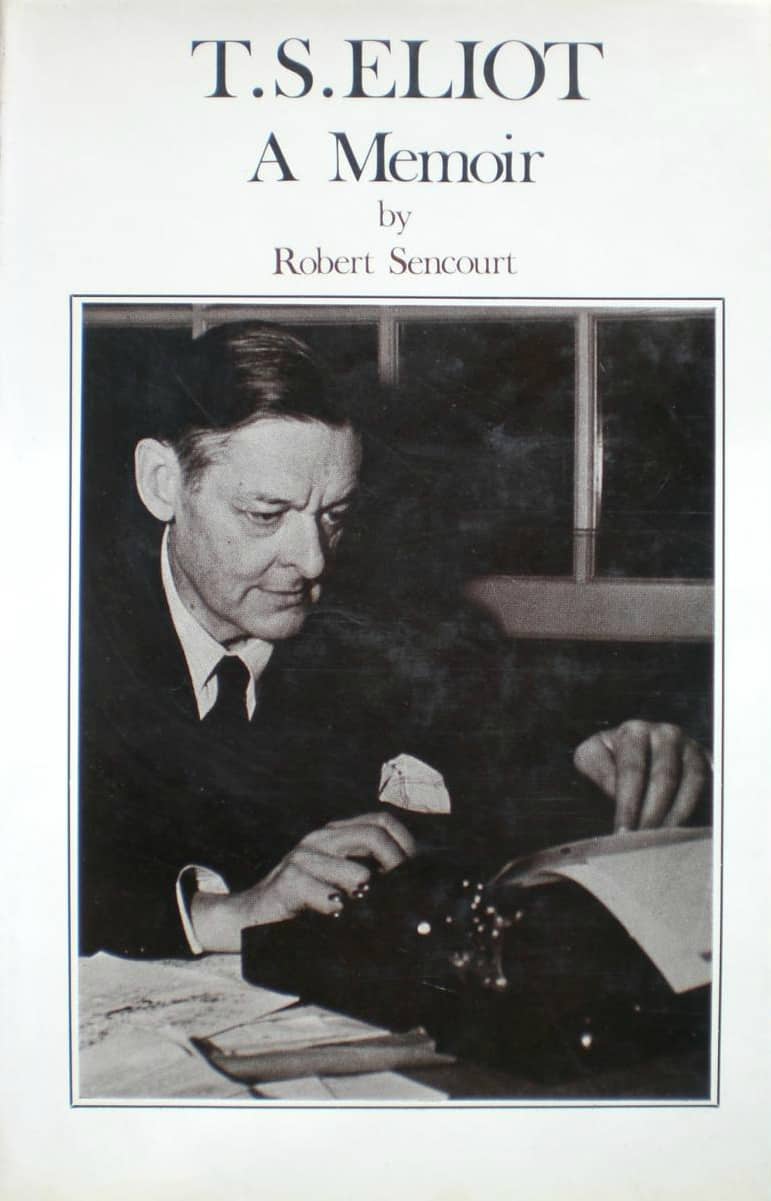 In his October 21, 1971 review of T.S. Eliot: A Memoir, Christopher Lehmann-Haupt commented, “this book makes one wonder whether all that will be written about Eliot’s life and art will tell us so much more than what this strange flash of lightning in the darkness has revealed.”

Robert Sencourt’s book made up of personal memories, interviews, and existing written sources was at the time of its release, the first, most intimate recollection of Eliot since his death in 1965. In the decades since the memoir’s debut, a wealth of biographical and critical writings about the poet, playwright, literary critic, and editor has emerged—most notably in the two comprehensive surveys, Peter Ackroyd’s T.S. Eliot: A Life (1984) and Lyndall Gordon’s T.S. Eliot: An Imperfect Life (1999).

These works examined Eliot’s literary accomplishments and his reputation and influence as one of the greatest modern poets and critics. They dissected the private Eliot—his upbringing in New England, his conversion to Anglicanism, and his first marriage to the mentally unstable Vivienne Haigh—and in the process discovered a complicated and imperfect man, an anti-Semite and a misogynist. In light of all that has now been revealed, is Sencourt’s memoir still enlightening?

As an expatriate, an Anglican, a literary critic, and one who often suffered neurosis, Sencourt offered an exceptional if mostly flattering perspective of Eliot’s life and work. While the memoir documented the whole of Eliot’s life, Sencourt’s personal accounts are limited to 1927 to the mid-1940s. For the remaining years, he leaned heavily on stories he gathered from friends and family in 1965 and the written accounts of others, including Bertrand Russell’s autobiography (1968) and B.L. Reid’s The Man from New York: John Quinn and His Friends (1968).

Born in New Zealand, Sencourt, like Eliot, was educated at Oxford and settled in England. He met Eliot and his first wife, Vivienne Haigh, at the Swiss sanatorium, Divonne-les-Bains, in June 1927. In this same month, Eliot—who had been reared as a Unitarian—converted to Anglicanism, and the faith the two men shared became the foundation of their friendship. In a thoughtful chapter dedicated to Eliot’s conversion, Sencourt elucidated the essentials of the religion, and how Anglicanism so sufficiently satisfied Eliot’s questions “of time and eternity, appearance and reality, experience and metaphysics,” and consequently imbued his life and work.

On Eliot’s creative and critical writings, Sencourt evaluated Eliot’s exploration into metaphysics and Anglo-Catholicism with passion and authority that signaled his erudition of the subject matter. On Eliot’s editorial work, Sencourt could comment as a colleague. Eliot served as editor of a few articles Sencourt submitted to The Criterion, and later accepted his Winston Churchill for publication at Faber and Faber.

The most colorful contribution of the memoir is the portrayal of Vivienne Haigh. That Sencourt had stayed with the Eliots at their home in Clarence Gate Gardens, and could personally comprehend her mental weakness, allowed him an exclusive perspective of the couple’s increasingly troubled marriage and its influence on Eliot’s work. Remarking later about the success of Eliot’s 1950 tragicomedy play that tackles difficult relationships, expiation, and psychotherapy, Sencourt said, “Tom was well acquainted with the strains of marriage and the advice of psychiatrists. As I look back to my first meeting with Tom and Vivienne in June 1927, I realize how much of that holiday has gone into The Cocktail Party.”

At the time of Sencourt’s death in May 1969, the manuscript for T.S. Eliot: A Memoir remained unfinished. Once with the publisher, editor Donald Adamson tidied up the text and added substantial footnotes that both defined the text and revealed Sencourt’s numerous sources. Ultimately, what makes the memoir worthwhile is the unique perspective that Sencourt imparted as Churchman, colleague, and friend. The book is truly, as Adamson stated in his forward, “the tribute of one very remarkable man to another.”