Three-Martini Lunches at the Ritz: The Rebellion of Sylvia Plath and Anne Sexton 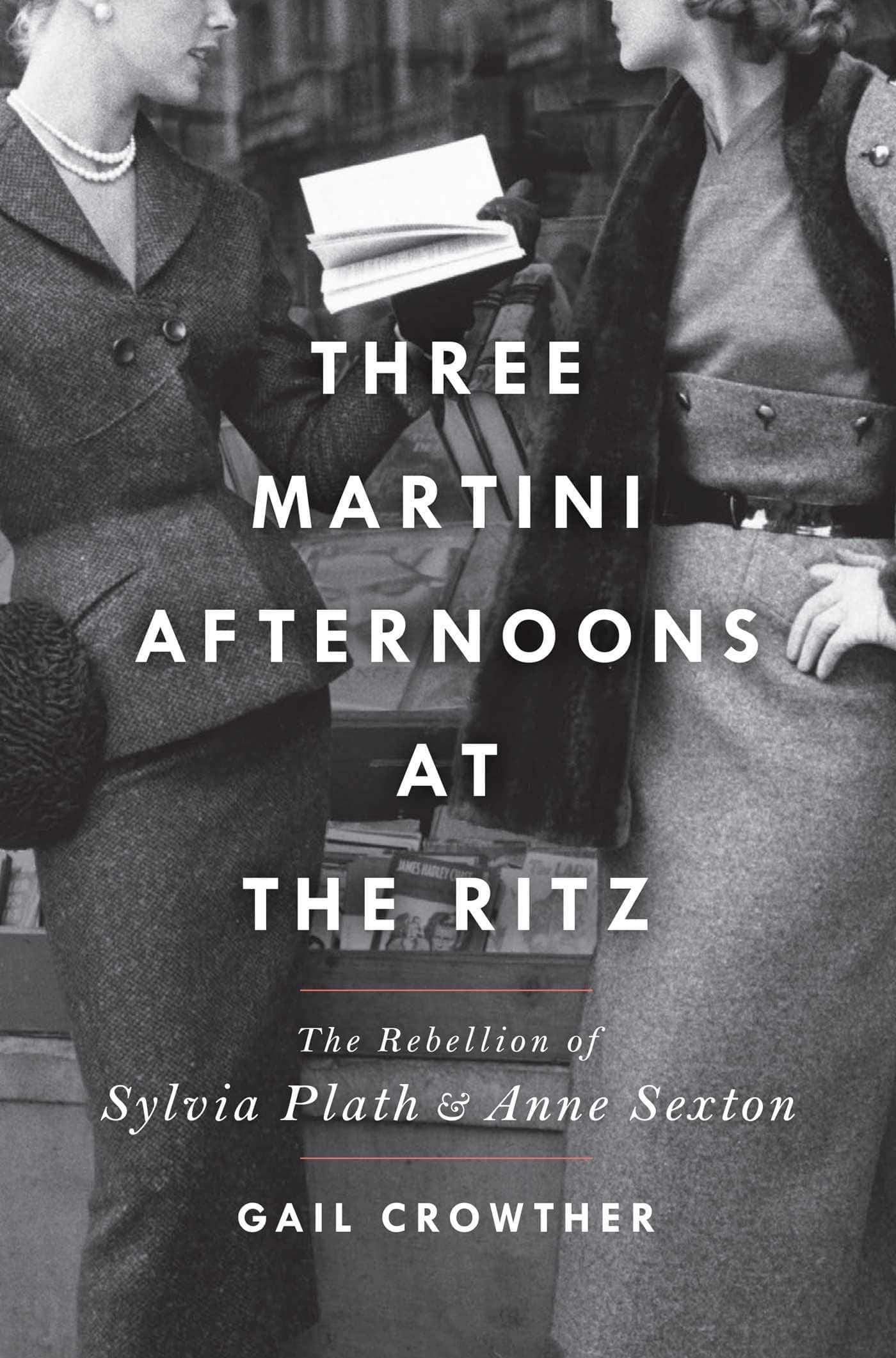 Three-Martini Lunches at the Ritz: The Rebellion of Sylvia Plath and Anne Sexton

Sylvia Plath and Anne Sexton in Robert Lowell’s poetry class in Boston are the stuff of lore, fostered by Sexton’s rollicking report, including how she would park in the loading zone of the Ritz and say it was okay because they were going to get loaded. The tales in Plath biographies about the raucous roundelays of these two poets are supplemented by Kathleen Spivack’s first-hand, sensitive account about their classroom behavior in With Robert Lowell and His Circle: Sylvia Plath, Anne Sexton, Elizabeth Bishop, Stanley Kunitz & Others (2012). Gail Crowther, author of The Haunted Reader and Sylvia Plath (2017) and co-author of These Ghostly Archives: The Unearthing of Sylvia Plath (2017), has not only mastered the literature in which both Plath and Sexton appear but has also done her original archival research and consultations with one of Sexton’s daughters and with Plath’s friend, Elizabeth Compton Sigmund. The result is an engrossing book that challenges the very limits of what we think we know about Plath and Sexton.

Part of Crowther’s purpose, although she does not state it is to continue the mission evident in Heather Clark’s Plath biography of situating these poets in the pressures of their cultural contexts, showing how alone they remained as they challenged the notions of what women could accomplish as writers, wives, and mothers. They were quite different personalities and poets. There is a kind of looseness in Sexton that is her greatest strength and limitation, writing as a poet of the viscera that is bold and inevitably called “confessional.” Sometimes she does not know when to quit and accept the perfection of verse that Plath achieved with such vigor in her final poems, overcoming her earlier tendency to stifle spontaneity in a quest for formal precision. For all their differences, however, these rivals inspired and pilfered from one another in mutually beneficial ways.

Both ended as suicides in desperation and despair, but also in an excruciating understanding of how their lives had reached their limits. Both readily talked about suicide in their Ritz revelry. They were dead serious about the right to annihilate themselves. They “felt death made them more real,” Crowther notes. Were they wrong to think so? Crowther does not pose such a question, but it is worth answering in so far as acknowledging they both keenly wanted the attention of posterity and therefore how they died, and when they died, was of signal importance to them.

For very different reasons, as Crowther shows, both needed support systems that men took for granted and that allowed men to weather their depressions. For a time, in their marriages—however fraught—these women had a kind of infrastructure of home and family, although Plath was much better at organizing herself, her husband, and their two children. In fact, she was so good at organizing that her husband Ted Hughes, as Crowther shows, was quite bereft without her, even though he left because he did not want to be organized!

Crowther deplores the pathographies that see in every sadness and depression warning signs of demise. To be sure, the signs are there, but so is the evidence of Sexton’s and Plath’s ebullience and power. They both knew how to eat men like air. But men were not their only problem. As Crowther notes, “both women had overbearing and emotionally demanding mothers,” and try as they might, these poets also found it difficult not to be “overbearing and emotionally demanding.” Did they discuss as much at the Ritz? Crowther can only speculate: “It seems unlikely Plath and Sexton would not talk about their mother-daughter relationships.” Both women also liked to talk about the men in their lives. Crowther asks: “Did they gossip about their husbands and dramatic marriages over their third martini at the Ritz while these very husbands were at home waiting for them to return?”

Crowther gets at what was going on inside these poets, what they were like, by piling up the material evidence. So she compares their address books, Plath’s “neat and self-contained”; Sexton’s “wilder and more flamboyant.” Yet both books “have in common . . . the merging of the domestic with professional.” The lives of these women were full of business of all kinds and certainly more than their husbands were capable of, who did not have to balance, in Crowther’s words, “rebellion and conformity.” Women were taught to be perfect at everything that Plath especially took to heart. It was a reaction to “learned behavior,” not “neurosis,” Crowther points out, that provoked these women’s breakdowns.

In a horrifying chapter about mental illness, Crowther delineates the malpractice of medical professionals who prescribed untested drugs and delivered unproven therapies like insulin shock that made for no discernible improvement. To be institutionalized deprived these women of the support they received from women friends. Crowther reports: “Connie Taylor Blackwell, a Boston friend of Plath’s, described how they would often meet and drink sherry and talk about ‘the void.’ It was a big topic, claimed Blackwell, because at the time, in the 1950s, women were being pushed in so many directions that the attraction of nothingness for them was very real. Women, quite simply, got exhausted by it all. . . . There is a reason why more women than men are diagnosed with depression. There is a reason why most people diagnosed with depression who are given drugs are women.” Sexton and Maxine Kumin, a mother with young children at home, spent hours on the phone critiquing their poetry. Kumin grounded Sexton and yet kept their collaborations “relatively secret because they feared people would lump them together and see them as alike. It was a struggle for separate identities in a literary world that was hostile enough to women.” The Kumin effect is evident in Crowther’s account of a joint interview during which Sexton “‘waxes lyrical about female friendship . . . ending with ‘I think I’m dominating this interview.’ Kumin replied dryly, ‘You are, Anne.’”

Crowther is a sociologist by training, and that background adds a good deal to her understanding of biography:

Of course, once they died, Plath and Sexton immediately became statistics, slotting into the cultural pattern and story of who was dying where, when, and how. The week Plath died in February 1963 there would have been at least ninety-nine other suicides, and an extra twenty-five to fifty who did not make the official lists. In 1974 when Sexton died, she fell into the category most prone to kill themselves, forty-five to sixty-four-year-olds. This impersonal information shows that sadly, there was nothing unique or doomed-genius-woman-writer about their deaths. They were, along with many other people, too desperate and wrought to continue living.

Crowther does not ignore psychology or the material conditions of her poets’ last days, showing how difficult it was for them to retain equilibrium without marriage, although she does not argue that being single is the cause of their deaths. Instead, she returns to an evocation of how much it took for them to live, as evidenced in

the endless manuscripts they left behind, worked, and reworked; thousands of letters, teaching notes, business contracts, household bills, bookkeeping. But also, as Plath said, in the lares and penates of a woman’s life: lipstick smears on envelopes, cigarette burns on letters, coffee cup rings on poetry drafts, their personal libraries, recipe books, and in their perpetual struggle against the male-dominated discipline they were so determined to succeed in.