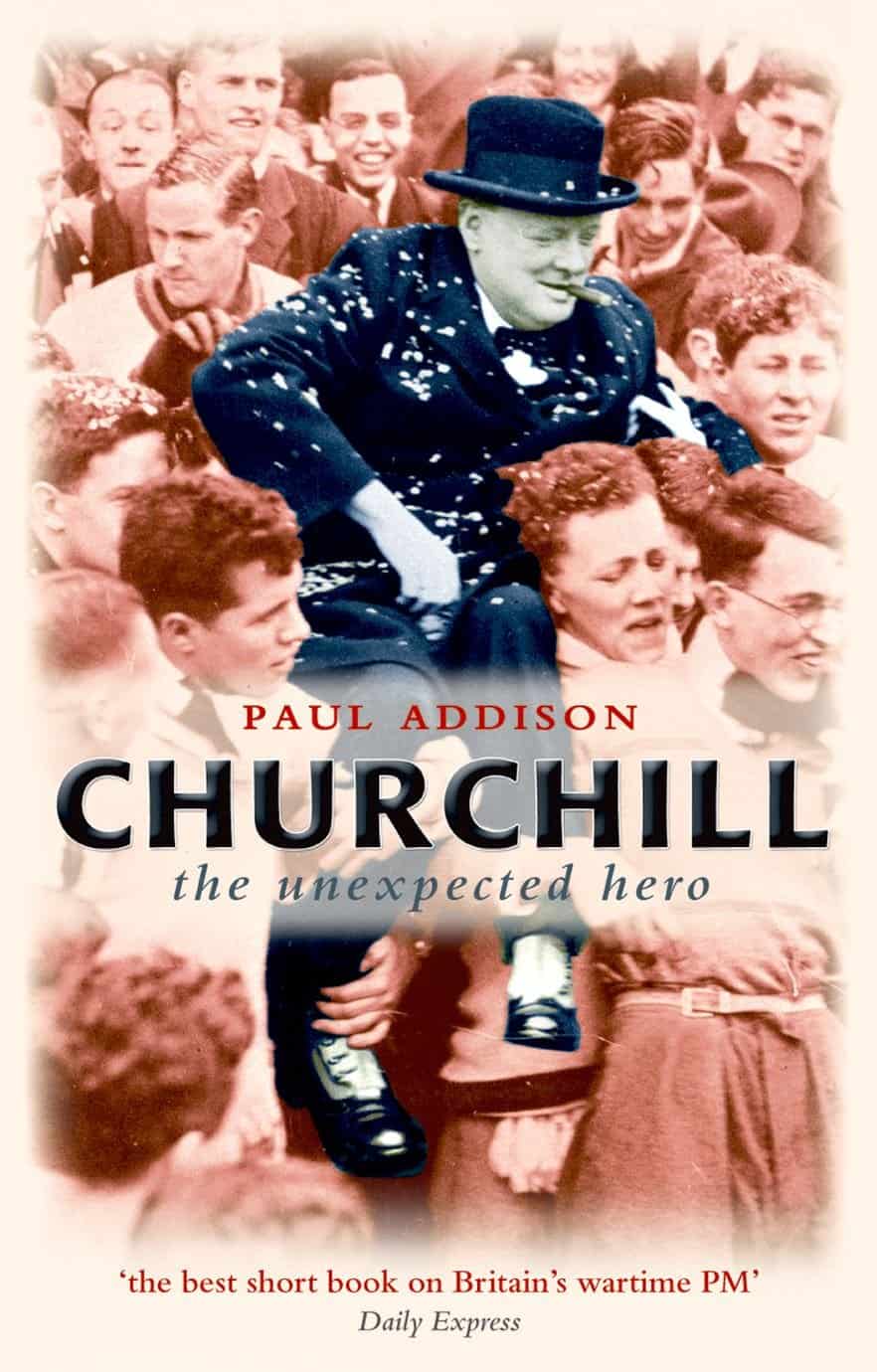 Paul Addison’s Churchill: The Unexpected Hero builds on his earlier Oxford Dictionary of National Biography entry in presenting a more detailed analysis of Winston Churchill’s character and career. Currently an Honorary Fellow at Edinburgh University, Addison is an established authority on British politics and society during and after the Second World War. The publication date of 2005 is significant, for three years earlier a BBC poll voted Churchill the “Greatest Briton” of all time. Indeed, since his death in 1965, patriotic fervor and enthusiasm for Churchill have seldom abated. The dominant image of Churchill as “saviour of his country” propagated by Isaiah Berlin and A.J.P. Taylor has often led historians to absolve, overlook, minimize, or underplay his personal and political shortcomings and failures.

Even modern biographers such as Martin Gilbert and Paul Johnson are often culpable of being overly charitable towards Churchill. More often than not, these shortcomings do not result from a willful misreading of history but derive from a pervasive sense that as a ‘Great Man,’ Churchill was not accountable for his actions in quite the same way as other politicians. Conversely, revisionist reaction against the view of Churchill as a visionary and great statesman is often excessive and misguided. In blaming Churchill for the post-war collapse of the British Empire and the attendant erosion of Britain’s ‘Great Power’ status, historians such as John Charmley and David Irving are guilty of reading history backwards. As the great historian, Frederic William Maitland stated “we should always be aware that what now lies in the past once lay in the future.” Churchill himself was well aware of the ideological vicissitudes of historical reputations, noting:

“Historians are apt to judge war ministers less by the victories achieved under their direction than by the political results which flowed from them. Judged by that standard, I am not sure that I shall be held to have done very well.” (pp. 243-4)

Churchill’s long political career, from the imperial grandeur of the late-nineteenth century to the gritty but ultimately affluent society of the post-1945 era, encompassed social, economic, and political changes of great magnitude. As he was intimately involved with most of the important political issues over the course of his life, any short biography must cover a vast range of topics, and many issues are inevitably treated rather sparingly. Nevertheless, Addison makes a convincing case for his central thesis that Churchill’s many political failures before 1939 made him an “unexpected hero.” Addison provides a solid body of evidence demonstrating that Churchill was a very divisive figure, whose recklessness and impulsiveness led even many of his admirers to lace their praise with criticism. For former British prime minister H.H. Asquith, Churchill was a “wonderful creature with a curious dash of schoolboy simplicity” and “a zigzag streak of lightning in the brain” (p. 74). More dryly, Neville Chamberlain noted Churchill’s unorthodox approach to policy-making:

“In the consideration of affairs his decisions are never founded on exact knowledge, nor even on careful or prolonged consideration of the pros and cons. He seeks instinctively for the large and preferably the novel idea such as is capable of representation by the broadest brush.” (p. 123)

These character traits, redolent of an aristocratic, aloof, and somewhat superficial attitude to politics, were identified and criticized by many intellectuals, politicians, and historians during Churchill’s lifetime. Among them, John Maynard Keynes, H.G. Wells, and Evelyn Waugh launched vitriolic attacks with coruscating wrath and wit. Churchill’s conversion from the Conservative to the Liberal Party and then back again, was, for some, testimony of his being “above party,” and to his independence of mind and originality of thinking. For others, it was indicative of his deception, opportunism, and lack of principle. Churchill’s judgment and trustworthiness were often called into question, and his arrogant, dictatorial approach alienated many within the military and political elite and led to many costly misjudgments and mistakes.

The heroic and visionary aspects of Churchill’s career, his ambition, exuberance, energy, wit, and rhetorical brilliance, are writ large throughout the book, and the literary appeal of Churchill’s experiences and adventures as a war correspondent in far-flung imperial outposts is hard to resist. Other biographers, such as Andrew Roberts, Henry Pelling, and Roy Jenkins have traveled a similar path. However, in recounting Churchill’s faults and failures as well as his qualities and successes, Addison effectively cuts through the morass of propaganda, bias, and historical inaccuracy to provide a more nuanced view of Churchill. Fully aware of Churchill’s prolific use of oratory, journalism, and historical writing in serving his political purposes, Addison gives particular attention to the dichotomy between Churchill as the bold and tenacious Minister, Servant of Crown and people, and the epitome of “British” values, and Churchill the self-serving, amateur, and often ill-informed politician and strategist.

Ultimately, like other biographers, Addison assesses Churchill on his record as a wartime leader. It is a record that is far from unblemished. Addison recounts Churchill’s lack of strategic knowledge and negligible understanding of the relative importance of different theatres of war. Churchill also vastly overestimated his influence on Roosevelt and Stalin, a diplomatic error of judgment that owed much to overstating Britain’s global position. Most seriously, Addison recounts the post-war historical dismantling of the version of events Churchill had presented, via carefully selected documents, in his six-volume The Second World War. In those volumes, there was no mention of Cabinet discussions for a compromise peace with Nazi Germany, nor was the strategic bombing of German cities fully revealed and explained. Political differences between the United States and Britain were underplayed, and foreign policy differences between Churchill and his predecessors exaggerated.

Historical research has altered many misconceptions and misinterpretations, but the most powerful early blow against Churchill was the publication of the Alanbrooke diaries between 1957 and 1959 which destroyed the “façade of statesmanship” Churchill had erected (p. 242). Criticism of Churchill (and corresponding praise for Chamberlain) has become more voluble over time, with the hagiography of the immediate post-war period superseded by a far more rigorous research agenda. The decisions made by Churchill, how he conducted the war, and whether there were any viable alternatives to war, are now all legitimate historical questions, and subject to scrutiny and debate. Churchill’s legacy has never been more highly contested. Yet, as Addison convincingly argues, identification and acknowledgment of Churchill’s failures does not necessarily negate or detract from his successes but by contributing towards a fuller and more accurate portrayal of the man, leads us closer to historical truth.

Given his importance to later revisionist accounts of Churchill, it is somewhat ironic that in 1943 Viscount Alanbrooke doubted if any future historian would be able “to paint Winston in his true colours.” (p. 183) Addison’s knowledge of the man leaves him well-placed to perform this task, for his thorough reading of Churchillian historiography is fully apparent, and excellent scholarship combine with lively, precise, and engaging prose to produce a very fine short biography. With a competent blend of narrative and analysis, the book is succinct, analytical, and informative, and most useful as a primer for those relatively unversed in Churchill’s life. Addison’s even-handed approach does not conceal or understate Churchill’s character flaws and political mistakes, and he wisely suggests that “overpowering egotism was the source of his greatest achievements as well as his biggest failures”(p. 81). Judicious to the last, Addison commendably concludes by viewing Churchill as “a hero with feet of clay” (p. 254), which is surely a fitting status for a politically cynical age.