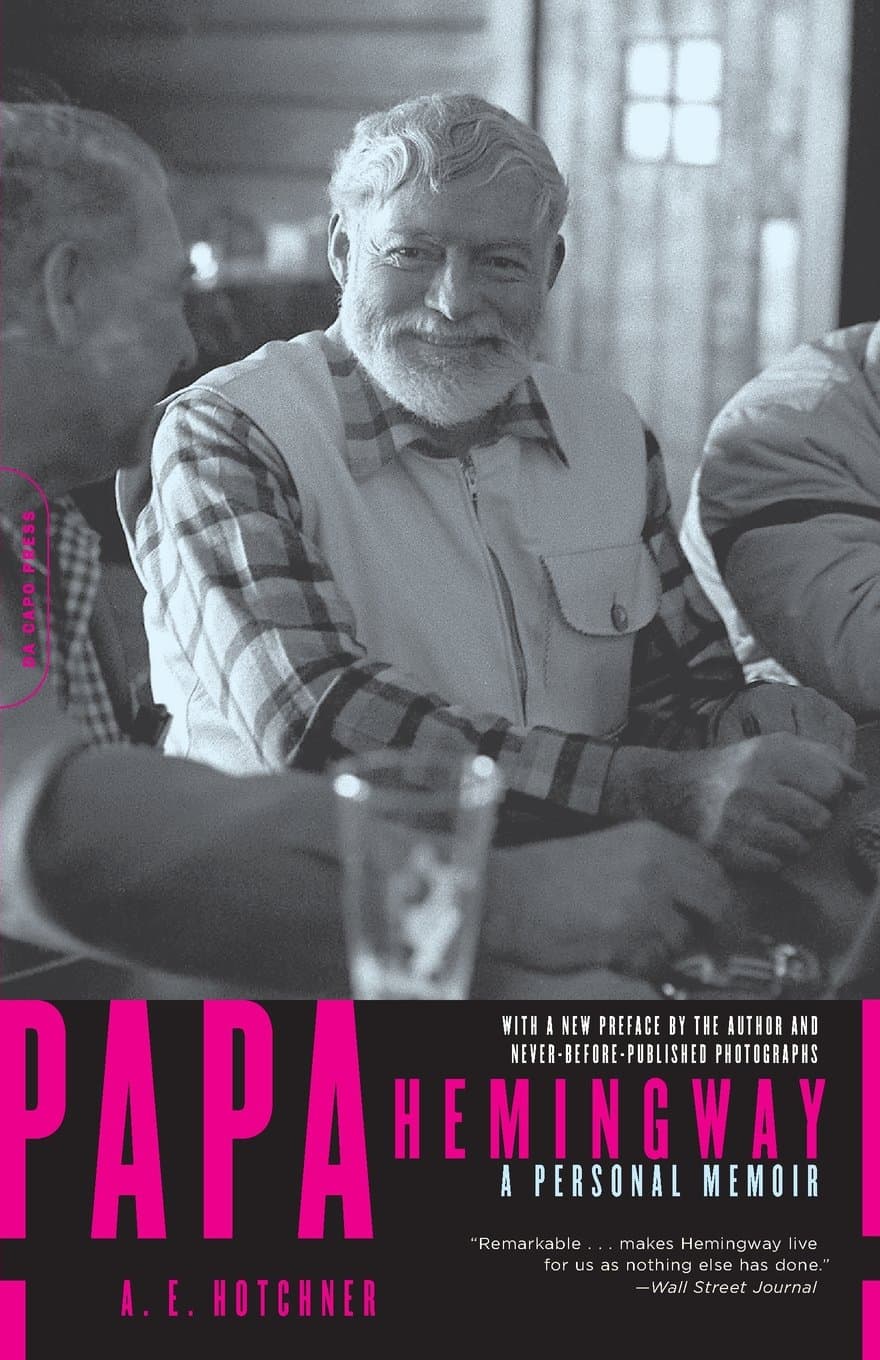 This new edition of Papa Hemingway from Da Capo Press brings A. E. Hotchner’s famous memoir back into print for the first time in nearly a decade. First published in 1966, this book offers an endlessly lively and intimate portrait of a friendship that spanned thirteen years and no fewer than five countries. Hotchner’s meticulous narrative—much of it derived from Ernest Hemingway’s own letters—depicts one of America’s greatest writers at his warmest and most joyous, but it also charts the long, agonizing physical and emotional decline that ultimately led to Hemingway’s suicide in 1961.

Hotchner’s relationship with Hemingway began in 1948 when the young journalist was working as a correspondent for Cosmopolitan magazine. Having been assigned the job of persuading Hemingway to write a piece on “The Future of Literature,” Hotchner is dispatched to Cuba, where the two men instantly bond over pitchers of daiquiris, afternoons of deep-sea fishing, and conversations about Sartre and Marlene Dietrich.

Over the next few years, their ties grow tighter, as Hotchner visits the novelist in Paris, Venice, Madrid, Havana and elsewhere. During these years, their friendship deepens. Hotchner comes to rely on Hemingway for the confidence and professional advice he needs to become a successful author, playwright, and screenwriter—indeed, he adapts much of Hemingway’s work for stage and screen. Hemingway, meantime, takes solace in Hotchner’s company, sharing with him an immense archive of personal stories that reveal the complexity of Hemingway’s character. Where Hotchner focuses on Hemingway, the writer, we are offered insight into the circumstances in which some of Hemingway’s most important works (and a few of his short stories) were conceived. Papa Hemingway is not, therefore, an intellectual biography. Instead, the book examines the business side of writing. We learn about Hemingway’s relationships with editors, his friendships and rivalries with other writers, and business dealings with film producers like Daryl Zanuck, who learns the hard way that Hemingway does not appreciate creative interference.

Most strikingly, Papa Hemingway shows Hemingway struggling to hold onto his sense of youth and virility. He brags incessantly about his sexual exploits, and the narrative is loaded with precisely the sorts of tales one would expect from an account of Hemingway’s life, including long and entertaining reminiscences about hunting, fishing, bullfighting, and war. At the same time, though, readers watch as Hemingway’s own health and confidence decline. He gains a tremendous amount of weight from excessive drinking and poor diet, and he suffers from chronic physical pain after 1954, when he survived two separate plane crashes while traveling to Africa. As the memoir scrolls toward its inevitable conclusion, a heavy depression—capped by the loss of his home in Havana after the Cuban revolution—drains Hemingway’s massive personality and furious creative energy from his ailing body and mind. He stops writing, stops hunting—offering implausible excuses to stay inside—and eventually consents to electroshock therapy in the last months of his life.

Papa Hemingway is not a conventional biography by any stretch of the imagination. It may be described best as a literary memoir, since Hotchner made no pretense of neutrality in depicting his subject, nor did he invest much effort in sorting out the “truth” of his friend’s life from the exaggerated and even implausible stories that flowed from Hemingway’s pen and tongue to the pages of this book. This fact has always made Papa Hemingway somewhat of a controversial text. Some readers have appreciated the tales themselves—authentic or not—as genuine expressions of Hemingway’s remarkable personality. Others have objected that Hotchner allowed Hemingway’s self-created mythology to overwhelm the truth of his life.

Few readers, however, will find this anything less than a fascinating, tragic, and loving account of one of the last century’s literary lions.