How to Read a Shakespeare Play 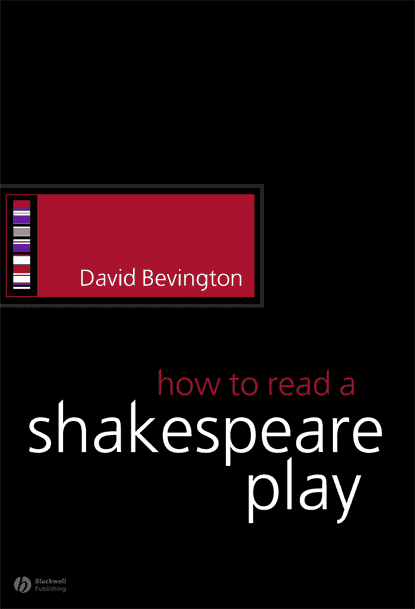 How To Read A Shakespeare Play

How to Read a Shakespeare Play is part of a small series of “How To” books released by Blackwell Publishing and designed to aid college-level students with their literature studies. Despite the somewhat officious title, this small volume by David Bevington strays far from an Idiot’s Guide-type simplicity or tidy bullet-point mentality. On the contrary, in just a few pages, the author manages to unearth the full richness of the Bard, opening the reader’s mind and asking questions rather than providing glib, easy answers. This is a terrific beginner’s volume for the novice English literature student tasked with studying the works of William Shakespeare, and a valuable re-entry point for the intermediate Shakespeare reader looking for additional analytical methods.

Naturally, the volume is powered both by the richness of the plays themselves and by the unassuming mastery of the author, Professor Emeritus of English Language and Literature at the University of Chicago since 1968. Bevington has edited many Renaissance drama anthologies and critical studies, including his Complete Works of Shakespeare, currently in its sixth edition. Delivering nothing less than what his scholarly reputation promises, Bevington’s technique is both wide-ranging and dexterous. He effortlessly moves among many aspects of Shakespeare—English history, the playwright’s mammoth vocabulary and language challenges to the modern reader, meter, source texts, social class and customs, thematic considerations—with the kind of sure hand and broad perspective that provide an undeniable comfort to the reader struggling to find proper access to the Bard. Equally impressive is Bevington’s facility in moving from the general to the specific; the text may deal with general themes or history in one instant, only to seamlessly transition to a breakdown of stressed syllables in a line of iambic pentameter in the next instant.

For Bevington, the “How To” book involves a multi-faceted approach. Rather than pursue a purist’s devotion to the texts to the exclusion of all else, the author encourages a combination of in-class readings, film screenings, live productions, and critical studies surveys in addition to careful readings. At the end of the book, he provides suggestions for well-made film adaptations of Shakespeare plays, as well as suggestions for further readings. The central strategy of the book is a call for relentlessly aggressive and probative readings of the plays. Bevington urges the reader to ask questions constantly of the text, to let nothing mis– or half-understood slide by but instead to challenge any difficulties in the text. This strategy is conceptualized in what is called “the theatre of the imagination,” a notion aided in part by the fact that, per the convention of the day, Shakespeare left very little stage direction. In the absence of directions for furniture, costumes, physical actions or staging, the reader is encouraged to become the director of his or her own Shakespeare production, asking the type of questions that would be necessary to put a play on its feet: What are the characters wearing? How does social station affect the relationships? What is accomplished by this or that speech or dialogue exchange?

The only criticism that might be leveled at this volume is that only a handful of Shakespeare’s best-known plays are analyzed—A Midsummer Night’s Dream, Romeo and Juliet, Henry IV, Part I, Hamlet, King Lear, and The Tempest—and so we are deprived of Bevington’s insight into the other works in Shakespeare’s great canon. However, How to Read a Shakespeare Play more than fulfills its purpose as a clear and valuable introductory text that will have the reader asking the best and most fruitful questions.