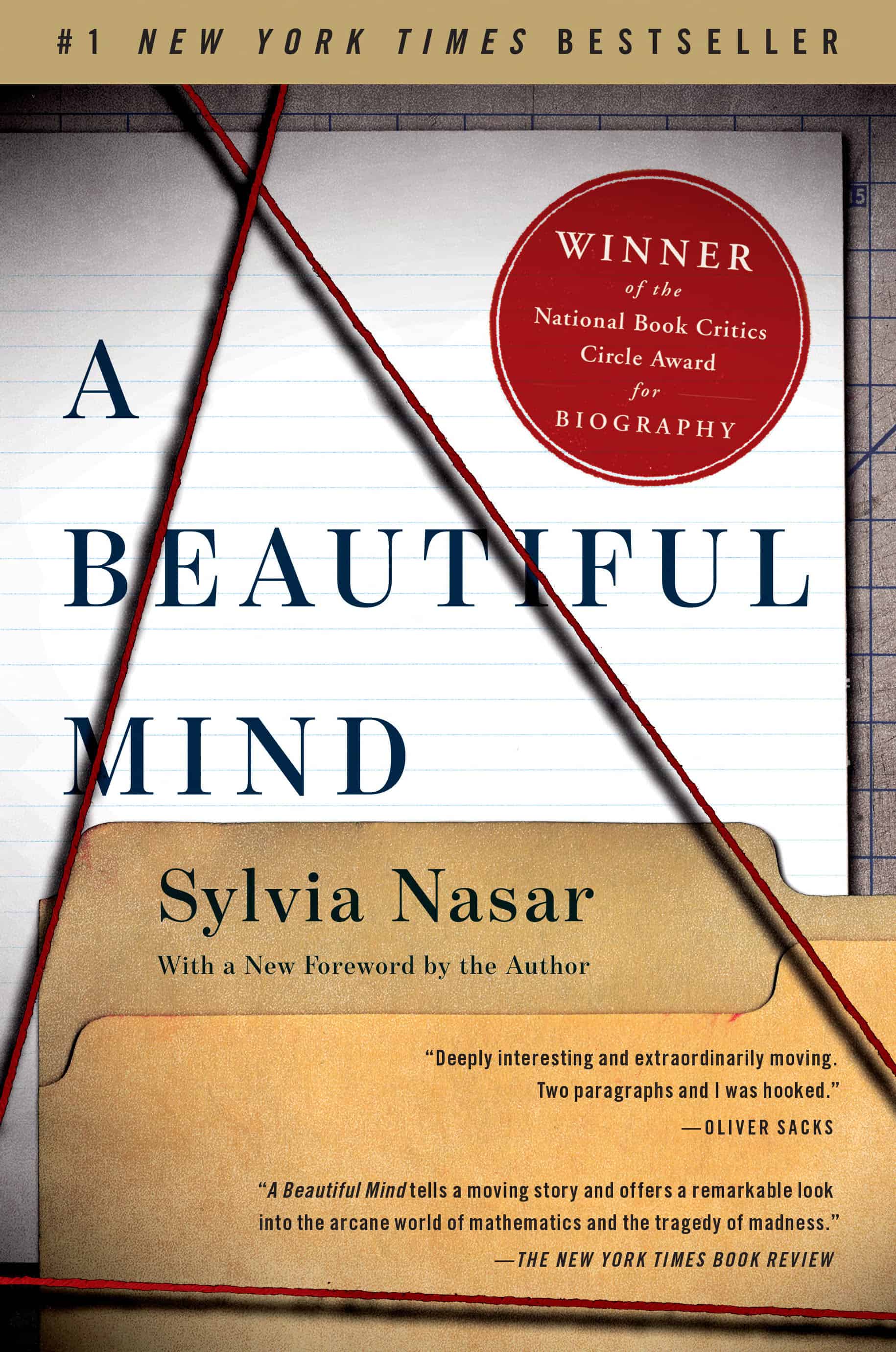 Mathematician John Forbes Nash Jr. was so confident of his own genius that in 1948, at the age of 20, he challenged Albert Einstein in his Princeton office about amending the physicist’s quantum theory. Nash was a man obsessed with originality and regularly sought answers to unsolved math problems that no other theorist would touch. The answers he thought up–especially relating to game theory–were revolutionary. But his bright mind could not save him from his descent into paranoid schizophrenia, which plagued him for 30 years, so winning a Nobel Prize in Economics in 1994 was a remarkable accomplishment. In her biography of Nash, A Beautiful Mind, author Sylvia Nasar describes the brilliant mathematician’s amazing but troubled life.

Nasar, a former economics correspondent for The New York Times and current professor at the Columbia School of Journalism, won the National Book Critics Circle Award for this biography. She deftly divides the book into five sections, which deal with Nash’s “genius, madness and reawakening.” Up until the age of 30, Nash showed few signs of the mental illness that would mark his later years. Nasar depicts Nash as an intelligent but introverted child who eventually became a graduate student at Princeton University in the early 1950s. There, he exhibited a strange behavior and a superior attitude, but Nasar genially explains that eccentricity was the norm among scientists; therefore, nobody guessed at mental illness. He was simply a brilliant theorist, admired even by his rivals. “His ideas were of the deep and wholly unanticipated kind that pushes science in a new direction,” says Nasar (12) because Nash would only tackle “unsolvable” math problems. Luckily for the reader, the author meticulously explains the complicated math theories influencing Nash’s work, including John von Newmann’s and Oskar Morgenstein’s 1944 treatise on cooperative game theory and economic behavior. In 2004, the 60th anniversary of their work, a 776-page commemorative edition of Theory of Games and Economic Behavior was released.

In direct reaction to this treatise, Nash published his 1949 article on non-cooperative game theory called the “Equilibrium Theory,” which eventually won him the Nobel Prize. Nash defines this theory as “a situation in which no player could improve his or her position by choosing an alternative available strategy, without implying that each person’s privately held best choice will lead to a collectively optimal result” (97). This theory has since been applied to various subjects from economics to Darwinism to disarmament. Nasar says that this concept of equilibrium in strategic games has become “one of the basic paradigms in social science and biology” (98). A Beautiful Mind presents an expansive overview of Nash’s math work, but for more detail, The Essential John Nash (2002), edited by Nasar, prints nine of Nash’s most influential papers, including those on game theory, bargaining, and real algebraic manifolds.

Most of these papers were published in the 1950s, while Nash was one of a group of colorful mathematicians who gathered at hotbeds of scientific activity such as Princeton, MIT, and the RAND Corp., a civilian think tank. Despite Nash’s intellectual accomplishments, a series of disappointments in 1958 and 1959, including losing out on two important math prizes, exacerbated his delusions and auditory hallucinations; they became so severe that he could no longer work. Nasar follows his troubled existence over the next three decades, which includes a series of hospitalizations, a stint in Europe, his divorce, and his eventual partial reconciliation with his wife. With her support, Nash was able to live a quiet life, stay out of psychiatric institutions, and battle to hold on to reality. Nasar thinks his ability to cope was also partly due to help from his friends and former co-workers at Princeton, now in positions of power, who allowed Nash to roam the university’s halls, use its libraries and computers, and generally still feel as if he were contributing to academia.

As occurs in about 8% of paranoid schizophrenics (353), Nash gradually went into remission until, by the time he won the Nobel, he was publishing articles, reconnecting with family, and acting almost normally in public, albeit still experiencing delusions. Nasar also delves into the background and contentiousness of the Nobel Prize in Economics, which was established and endowed by the Swedish central bank in 1968, in memory of Alfred Nobel’s 1895 will, which established the other prize awards. Nash’s year-long nomination was plagued by in-fighting and the committee members’ knowledge that he was not mentally well and might “blow up” at the ceremony. Despite this ultimately baseless argument, Nash finally received the accolades he deserved.

In 2001, the movie version of A Beautiful Mind came out and won an Academy Award for Best Picture. Part of the story’s appeal is due to Nash’s extraordinary journey from brilliance to isolation to fame. What is particularly compelling about this book is how Nasar captures the mind and the spirit of an incredible genius who would not give up on his life or his work despite tremendous odds.

The theories discussed in A Beautiful Mind are complex, but Nasar describes them in a clear and simple manner that would appeal to most readers with a basic knowledge of math. Also helpful are the copious 44 pages of notes, detailing her research and interviews with Nash’s family and colleagues, and the index, which helps distinguish the many scientists who were a part of his life.

This book also depicts how Nash’s life was influenced by many other great scientists of the 20th century. The author shows how the close-knit world of mathematics, science, and government intersected to create some of history’s most important advances. Also presented are the great mathematicians, such as von Neumann, a game theorist who became part of the Atomic Energy Commission and reportedly became one of the role models for Dr. Strangelove (along with Edward Teller, the father of the hydrogen bomb); Norbert Wiener, the father of cybernetics; and Donald Spencer, one of the most versatile American mathematicians of all time. A Beautiful Mind is not just a book about Nash, but a re-telling of life during the last century when mankind thought science could solve all of the world’s problems if only it tried hard enough.