Research Professor at the University of West Florida, Allen Josephs is a world-renowned Hemingway scholar and past president of the Ernest Hemingway Foundation and Society.

Simply Charly: You’ve had an abiding interest in Spanish culture for more than 40 years, particularly in bullfighting. You have recently published Beyond Death in the Afternoon: A Meditation on Tragedy in the Corrida, and a collection of your previous writings entitled On Hemingway and Spain: Essays and Reviews, 1979-2013. How did this fascination with all things Toreo begin?

Allen Josephs: Actually, my interest in Spanish culture and the bulls dates from 1962, so that’s beyond the half-century mark now. I was lucky enough to find my way to Spain just before I turned 20. I felt instantly and irrevocably as though I had come home to a place where I had never been. I learned Spanish very quickly and loved the language and the people who so selflessly taught it to me. Unlike some cultures, the Spaniards want you to speak their language. Then I saw my first “bullfight,” and loved it at once. Seems like yesterday.

SC: In a piece you wrote for The Cambridge Companion to Ernest Hemingway you stated that among the many places that Hemingway wrote about, none captured his imagination as much as Spain did. That’s a bold statement to make, considering that places like France, Italy, Key West, and Havana have also figured quite prominently in his writings. What is your argument for this position?

AJ: Just look at what he wrote about Spain: many short stories, much of his journalism,  his three finest novels (The Sun Also Rises, For Whom the Bell Tolls, and The Old Man and the Sea), plus two books of non-fiction (Death in the Afternoon and The Dangerous Summer). Spain was also the place of his only political involvement—the Spanish Civil War of 1936. Nothing else comes close, especially if you lump Cuba in there and I think you must. Cuba was the most Spanish of the Spanish colonies. Remember, too, that the character of The Old Man and the Sea, Santiago, is from the Canaries, the Islands, which belong to Spain. He is Spanish, African, and Cuban. And, of course, the bulls really grabbed Hemingway’s attention.

AJ: That toreo was the moral or ethical center of the novel, and actually of a certain form of life. Everything in the novel revolves around the fiesta and at the center of the fiesta is toreo. It’s really quite simple if the reader can dispense with built-in cultural prejudice—the Anglo chauvinism is a real problem, and one that concerned Hemingway greatly. It was because of that cultural blindness on the part of his compatriots that he wrote Death in the Afternoon. He wanted to explain to us something we did not understand. This cultural prejudice runs so deep that many of the reviews of Death in the Afternoon were negative because the reviewers could not see over their own beliefs to understand what Hemingway meant. The one Spanish reviewer of the book, himself a bullfighting critic, understood it at once and called the book a Gospel, akin to bringing the “Good News” of toreo to the gringos. This issue is highly complex, and readers should not judge without knowledge and preparation. Suffice it to say that Hemingway makes toreo the moral or ethical center of his work for very substantial spiritual reasons.

AJ: Not important at all, in my opinion. Hemingway is interested, above all, in spiritual issues, and much of what gets called “masculinity” is merely a genderized misunderstanding of these issues. Fishing, toreo, war, hunting, eating, drinking, and writing are spiritual matters relating to the sacred. To lump them under the “masculinity” label is like saying The Song of Songs or the poetry of San Juan de la Cruz is really just about sex. Such misconceptions reflect more on the critics than on Hemingway’s writing. 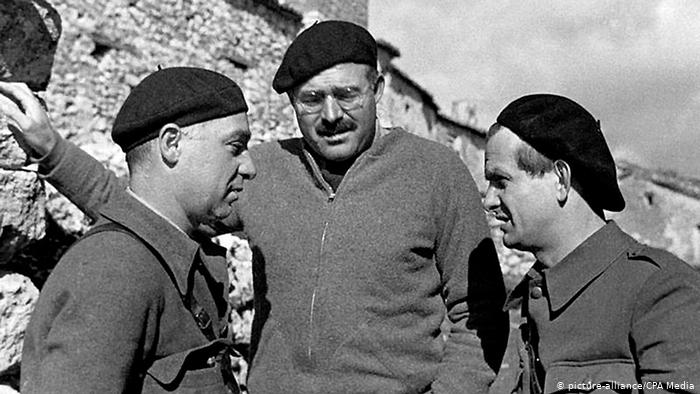 AJ: The “bullfight” is not a “bull fight.” If it were, the bull would naturally win. It’s a sacrifice, and it recapitulates the earliest myths and rituals we have—The Epic of Gilgamesh or the story of Theseus and the Minotaur. In those myths, the hero dominates nature: the man-god defeats, by virtue of his wits and skill (what we call “art” today), the bull-god. It’s an ancient story at the core of human existence, and it goes back at least 50,000 years. It carries a great responsibility, which, along with its price, is what I was looking at. This issue is enormously complex, and it’s taken me all my life to arrive at the questions, much less the answers. It’s too deep to slough off with a quip, so I suggest that readers who are interested—it is, after all, one of the deepest philosophical questions of all—get the new printed version just out by New Street, my publisher. It’s available very reasonably on Amazon under that same title and my name.

SC: In 1959, LIFE Magazine commissioned Hemingway to cover a duel between matadors Antonio Ordonez and his brother-in-law, Luis Miguel Dominguin. The article (posthumously released as a book entitled The Dangerous Summer) was produced during a time when Hemingway was suffering from many physical ailments, as well as from a deep depression. How were the articles received when serialized in the magazine? And how does this work stack up against his previous writings, especially on bullfighting?

AJ: It doesn’t stack up well at all. I wrote an article on the subject. It’s difficult to find, but will be available very soon in On Hemingway and Spain: Collected Essays and Reviews, 1979-2013, also from New Street. The piece—whatever genre it was—was not well received in Spain as it made some rather silly comments about a famous bullfighter, Manolete, and it failed to get a good focus on the rivalry between the matadors in question. It was his last literary undertaking, and I consider it his weakest. But of course, he was in very bad health, both physically and mentally, so any judgment has to be tempered.

SC: After his death in 1961, Hemingway’s star began to wane, particularly during the 1970s. To what do you attribute this? And how relevant is Hemingway today?

AJ: The feminists of the first wave used him as a punching bag, as did the anti-war crowd. Later feminists such as Linda Patterson Miller, and others, redeemed his work because they took the time and the effort to actually study what he had written, instead of jumping to dubious conclusions (one university reportedly threw a party to celebrate washing Hemingway out of the Freshman Lit class). After the forming of The Hemingway Society in 1980, things began to change—the Hemingway biography industry took off and shows little sign of abating, although much of what has been written as biography must be read with a grain of salt.

SC: Hemingway’s third wife, American journalist and novelist Martha Gellhorn, described Ernest as “a genius … not so much in what he wrote … as in how he wrote; he liberated our written language. All writers, after him, owe Hemingway a debt for their freedom whether the debt is acknowledged or not.” Can you elaborate on how Hemingway liberated our language?

AJ: That quote by a non-sympathetic ex-third-wife and excellent writer in her own right, is one of the truest judgments ever made about the importance of Hemingway’s work. He’s been the most important stylist in English since Shakespeare, and the so-called “Hemingway factor” cannot be subtracted from our language. What did he free us from? In a word, 19th-century rhetoric. I go into this topic at some length in On Hemingway and Spain, in an article called, “How Did Hemingway Write?” Naturally, I quote Miss Martha, of whom I was quite fond. And also Ezra Pound, who called him very early on the finest prose stylist in the world. How could he not be—after all, Pound was his teacher.

SC: In 2010, the Catalan parliament voted to ban bullfighting, which finally took effect in January 2012. It was a big blow to many Spaniards who see the age-old ritual of toreo as a key part of their nation’s cultural heritage. Do you think this ban will spur other regions to follow suit? And what future lies ahead for toreo?

AJ: The Catalans banned the corrida purely for political reasons – because it is Spanish. It makes you understand why Hemingway despised politics and politicians. Yes, others will follow suit and already have in Latin America, but for the wrong—political—reasons; the move had nothing to do with animal treatment. Hemingway, William Faulkner, and Cormac McCarthy (influenced deeply by them both) wrote against the modern world, and their message is not to be taken lightly. Rejection of the bulls is representative of what is wrong with modernity. To ban them is to embrace political intransigence and to fail to understand one of our deepest and oldest belief systems. As toreo goes, so goes the world.

SC: For those coming to Hemingway for the first time, where would you suggest they begin?

AJ: The short stories, without a doubt. That’s where Hemingway’s stylistic revolution takes place, especially the vignettes of In Our Time and several of the Nick Adams stories, such as “Big Two-Hearted River.”