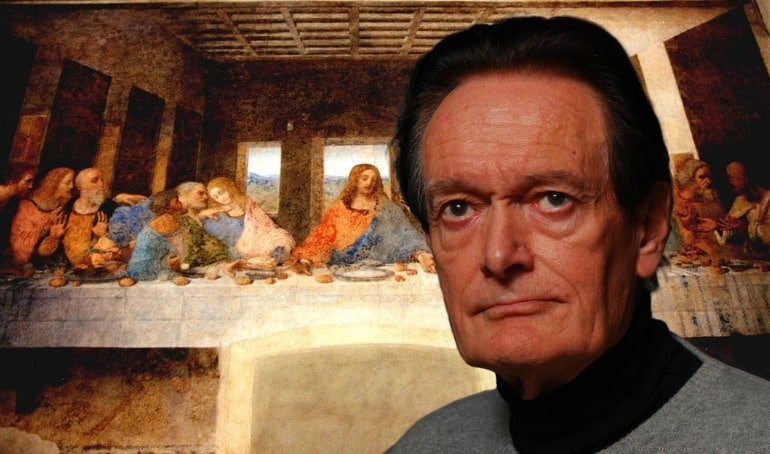 Not a Da Vinci Code: Martin Kemp Explains the “Secrets” of Leonardo’s Skill and Mastery

A leading figure of the Italian Renaissance, Leonardo da Vinci (1452–1519) was a multi-talented and prolific painter, sculptor, architect, mathematician, engineer, inventor, anatomist, geologist, cartographer, and botanist whose work has influenced countless artists of his and future generations.

Martin Kemp is Emeritus Research Professor in the History of Art at Oxford University. He has written and broadcast extensively on imagery in art and science from the Renaissance to the present day. He has also curated a series of London exhibitions on Leonardo da Vinci.

Simply Charly: You were featured prominently in NOVA’s Mystery of a Masterpiece special, wherein you were called upon to investigate whether a painting obtained by Peter Silverman was truly painted by Leonardo da Vinci. What are some of the telltale clues that would indicate Leonardo’s handiwork in a given painting?

Martin Kemp: The first thing to say is that it’s not a painting. It is a highly innovative portrait on vellum in inks and colored chalk. Technically, it is a drawing or illumination.

There are a complex series of interlocking clues, ranging from stylistic to scientific. We can, for instance, look at the handling of the pen (to indicate whether it’s definitely drawn left-handed) and the handprint technique in the flesh tones. We can set it in the context of Milanese court portraiture of women, identifying it as a likely portrait of Duke Ludovico Sforza’s illegitimate daughter Bianca. The scientific examinations have revealed characteristic aspects of Leonardo’s creative process and shown the extent of the restoration, especially in the parts that are discordant with Leonardo, such as her green dress. The carbon dating and what we know about the provenance effectively rules out a forgery.

SC: That work, La Bella Principessa, is the subject of your 2010 book of the same name. Has the painting’s status as a Leonardo piece generally been accepted, or is there still resistance? Have there been any recent developments in the case of La Bella Principessa?

MK: As we saw in the Nova program after the book was published a professor in Florida, Dr. Edward Wright, suggested that it came from a copy of the Sforziada (a eulogy of the Duke’s father, Francesco). We went with National Geographic to the National Library in Warsaw to follow up on this hint and found that the sheet on which the portrait was made almost certainly comes from the book. Even the stitch holes matched. That particular de-luxe copy of the Sfoziad was made for the marriage of Bianca to Galeazzo Sanseverino, commander of the Duke’s forces. Within a few months, Bianca had died. The evidence has been fully published in an Italian edition by Mandragora. Those few scholars who opposed it have gone rather quiet – but art historians are an obstinate lot!

Pascal Cotte in Paris now has some excellent new evidence about the underdrawing, which we hope to publish at some point.

SC: You count among your research interests the relationship between science and art—a relationship that Leonardo explored very thoroughly. How did Leonardo’s understanding of anatomy and nature translate into his paintings? Was his interest in scientific illustration unusual or typical of painters of his time?

MK: His interest was not unique. A mastery of perspective and anatomy were (in theory at least) necessary for painters who wished to depict the human body and nature in keeping with visual appearance. Andrea del Verrocchio, his master, had a command of perspective and was a master of the anatomical portrayal of the human figure. Leonardo went much further. He insisted that every aspect of nature as “invented” by the artist in the paintings that emerged from his imagination should be remade in accordance with natural law. This covered every aspect of the optics of seeing, the nature of the human body (beyond surface anatomy), the body of the earth (as in the Mona Lisa), and also what he called “the motions of the mind.”

SC: You served as the editor of Leonardo on Painting, a compilation of Leonardo’s notes on the act of painting. How did Leonardo view his chosen craft? What aspects of him do his private notes reveal?

MK: Leonardo regarded art as a scientia—as the product of a systematic body of knowledge. His point was precisely that it was not a craft but an intellectual pursuit, fit for a gentleman. The painter stood above even the poet as the re-maker of nature through fantasia (imagination). The texts we edited were drawn from many notebooks. Leonardo himself never produced a final version of his planned treatise on painting, and the one eventually assembled by his pupil Francesco Melzi incompletely reflects his intentions. We did not intend to reconstruct Leonardo’s treatise, which is impossible, but rather to produce something that respects his overall order and his way of thinking. It’s aimed at the non-specialist—to give an insight into the incredibly demanding program he set the painter in re-making nature. The notes reveal his obsessions and a certain amount of unrealistic expectation (not only for others but also himself). His agenda was ultimately too big to be realized by anyone.

SC: Leonardo da Vinci stands among the pantheon of great Renaissance painters; the Mona Lisa (or La Gioconda) is one of the most famous paintings of all time. What aspects of Leonardo’s painting set him above the average painter? What sort of techniques did he pioneer?

MK: Leonardo’s works contain a very special combination of deep knowledge, which infuses every aspect of his art, but at the same time he used techniques of visual and emotional ambiguity to invite the viewer into his paintings. The ambiguities relate to his ideas about vision and the indefiniteness of seeing that he discussed in his later notebooks. The science and expression are different sides of the same coin. His actual painting techniques are of indescribable delicacy that even his close followers could not emulate. He seems to create living surfaces. I have twice seen the Mona Lisa out of its frame. It is spine-tingling!

SC: Are there any other paintings that are currently being disputed as possible Leonardo works? Do you believe any of them might be authentic?

MK: There are too many for this interview. I get sent candidates on a weekly basis, often by obsessional owners. The Salvator Mundi, first exhibited in London last year, is still being debated, but I think that it’s seeping into general acceptance. The two recent discoveries are the first for over a century.

SC: A great deal of Renaissance art deals with religious subject matter, and Leonardo is no exception: The Last Supper stands along with the Mona Lisa as one of his most famous and popular works. Did Christianity have a significant impact on Leonardo’s career? Was he particularly religious?

MK: In the wake of the dreaded Da Vinci Code there has been something of an obsession with Leonardo as an active heretic. I get sent many messages claiming that there are hidden images in Leonardo’s paintings, whether of figures from Dante, demons, or alligators. There is no primary evidence in favor of any of this.

Leonardo believed absolutely in the divine creator of the world, and his will confirms his orthodox beliefs. He was not much concerned with theology and believed that the truths of revelation were different from those of reason. His actual works are incredibly successful in evoking a spiritual presence – both within and beyond his paintings. As an atheist, I would be happy if Leonardo joined the club, but be absolutely isn’t a member.

SC: We know that Leonardo began painting with his apprenticeship to Andrea del Verrocchio, and it was from Verrocchio that Leonardo picked up what would become his own painting style. From a critical standpoint, how did Leonardo’s style develop after his apprenticeship ended? What elements of Verrochio’s influence can be seen in Leonardo’s pieces?

MK: Leonardo learned a great deal from Verrocchio’s work as a sculptor and draftsman. He learned about the anatomical and proportional portrayal of the body; about motion in space and the motion of the viewpoint; about the behavior of hair and draperies. Verrocchio was involved in almost all the artistic media and undertook engineering. Leonardo learned least from Verrocchio as a painter! The master’s painting style is very elusive. Leonardo’s early paintings, like the Annunciation and the Munich Madonna, can be considered as products of Verrocchio & Co, plc.

SC: Leonardo was notorious for leaving pieces unfinished, a fact that he himself lamented—his unfinished works include St. Jerome in the Wilderness and The Adoration of the Magi. Why did Leonardo struggle with finishing so many of his pieces? How are these unfinished works treated by collectors and critics today?

MK: He set such high demands on each painting that it was difficult to realize them. It’s clear his unfinished works were valued as early as in his own lifetime.

SC: Much of Leonardo’s life is shrouded in mystery, meaning his life and works tend to attract a considerable amount of conspiracy theories. In your work as a Leonardo scholar, have you encountered many misrepresentations about him? Are there any prominent misconceptions about his life and career?

MK: He is very well documented for an artist of his time. There are lots of documents, early accounts, and, of course, thousands of pages of writing.  His life is not “shrouded in mystery.” The “mystery” has been manufactured by those who find the truth too prosaic to account for the wonderful creations. Mona Lisa was the wife of a silk merchant. Boring but true. But the documentation does not seem to do the job of explaining why it is an image with such magic. The explanation lies in Leonardo’s imagination and skill, not in some speculative mystery. The big post-Dan Brown misconception is that Leonardo was secretly communicating heretical messages via codes to us 500 years later. Why? There are no “codes” in Renaissance paintings. There are “allegories” and “symbols,” but these are an integral part of the appearance and period reading of the picture, not secrets hidden through some deceptive strategy of secrecy.