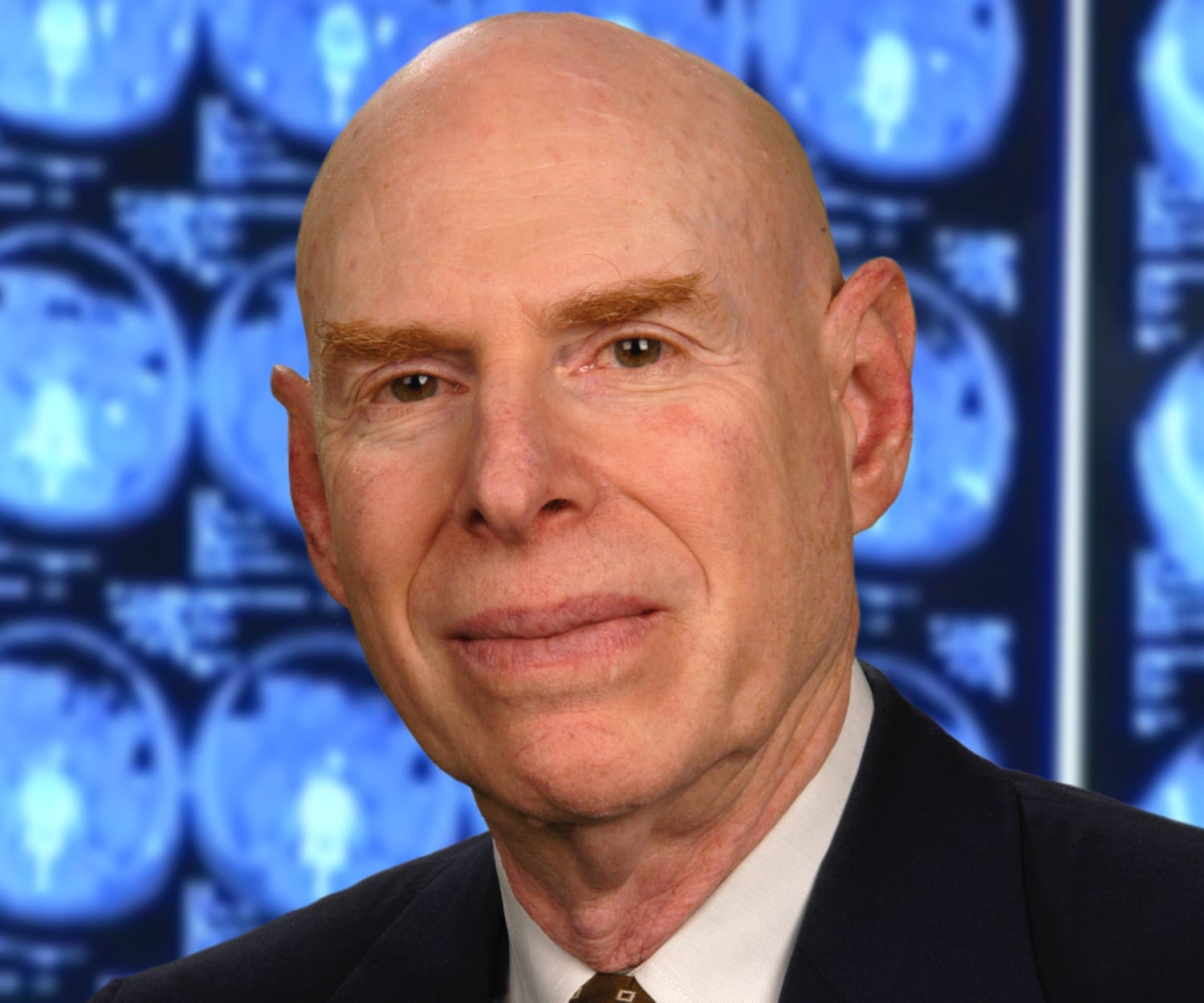 Generally considered one of the most influential physicists in history, Albert Einstein’s (1879–1955) groundbreaking theories reshaped the scientific community’s view and understanding of the universe. He developed the special and general theories of relativity and won the Nobel Prize for Physics in 1921 for his explanation of the photoelectric effect.

Hungarian-born German physicist Philipp Lenard (1862–1947) was the winner of the Nobel Prize for Physics in 1905 for his work on cathode rays and the discovery of many of their properties. He also contributed to our understanding of the photoelectric effect.

Bruce J. Hillman, MD, is both Professor Emeritus of Radiology at the University of Virginia and Adjunct Professor of Radiology at Duke University, where he is an Associate of the Trent Center for Biomedical Ethics, the Humanities, and the History of Medicine. He is co-author of The Man Who Stalked Einstein (2015).

Simply Charly: As a former Professor and Chair of Radiology at the University of Virginia School of Medicine, how did you come upon this riveting story about the antagonistic relationship between two Nobel Physics laureates—Albert Einstein and Philipp Lenard?

Bruce J. Hillman: As I am not a believer in fate, call it “serendipity” or, perhaps, since we’re talking Einstein here, “the randomness of the universe.” Regardless, my writing The Man Who Stalked Einstein is the product of many disparate factors coming together at just the right time. Several years before the book’s 2015 publication, I was asked to join the heretofore women-only writing critique group of medical school associate dean, Dr. Sharon Hostler. The group greatly improved my writing and led to my publishing a number of short stories in literary journals. About the same time, I was invited to lecture at the University of Cambridge. Being an avid fly fisherman and golfer, and not averse to tippling the occasional “wee dram,” I tacked on a week in the Scottish Highlands, stopping first near Aberdeen to play the famous links at Cruden Bay. There, the course secretary paired me to play a round with two Canadian brothers whose father had spent World War II on loan by his government to the Trinity Project. The brothers wished to know whether radiation exposure from witnessing the atomic test blasts could have led to their father’s rapid decline from robust health to death during his seventy-first year. There was no way of knowing, but I did some research and photocopied a number of articles to send the brothers. Somehow, without knowing to this day how it occurred, at the bottom of the pile was a 1946 article, unrelated to my intended study, detailing two interviews of Philipp Lenard, conducted by U.S. Army physician, Lewis Etter. Etter had spent the war in Europe and was about to return to the U.S. to continue his training as a radiologist. During the interviews, Lenard made the startling claim that it had been he, not Wilhelm Conrad Röntgen, who had discovered the x-ray.

To a radiologist, this was an abrogation of dogma serious enough to merit further research. I prepared a bare-bones book proposal and sent it to a literary agent—Tucson-based Claire Gerus—recommended by a college classmate. Within a week, I heard back from her. She had tested the idea on several publishers. “Nobody has heard of Röntgen,” she said. By then, however, I had read a great deal more about Lenard. “Has anyone heard of Einstein?” I replied.

Within a month, I had an agent, a publisher, and an advance. A year later, I also had a book.

SC: Did you feel confident enough to retell this story as it obviously fell outside your area of expertise?

BH: Perhaps initially I had some misgivings, but I had done a great deal of research and scientific writing during my career. The biggest challenge was dealing with primary source documents written in German. My German is rudimentary, at best. However, I have German friends, a married couple—Birgit Ertl-Wagner a radiologist, and her husband Bernd, a historian whose Ph.D. thesis dealt with the same historical period. Both their English and their native German are excellent.

SC: How did you carve up writing duties with them?

BH: I did all the initial writing. Bernd and Birgit translated German documents and reviewed each chapter, making suggestions for improvements. Birgit also reviewed all of the physics, making the writing simpler and easier to understand. This was critical, since we wanted the book to be approachable to the educated lay reader.

SC: What were Lenard’s major contributions to physics for which he won the Nobel prize?

BH: Lenard was among the early researchers of cathode rays. He probably is best known for his improvement to the early cathode ray tubes of Johann Wilhelm Hittorf and others, replacing the glass at the point of cathode-ray emanation with a thin slip of aluminum. This allowed researchers to better observe the effects of the rays outside the tube itself.

Lenard also was the first to describe the photoelectric effect, which occurs when ultraviolet light strikes a metal surface. Ironically, after years of being denied the Nobel for his work on relativity, Einstein won his prize for “the law of the photoelectric effect,” defining the mathematical relationship between the frequency of the electromagnetic radiation and the energy produced using Planck’s constant.

SC: Lenard had labeled Einstein’s contributions as “Jewish physics.” What did he mean by this? And what were his main gripes against him?

BH: Lenard laid out his beliefs on culture and physics in the introduction to his four-volume 1935 publication, Deutsche Physic. Contrary to rational thought, Lenard believed that all human endeavor could be ascribed to culture. Hence, there was Japanese physics, African physics, and so forth. All of these culturally-imbued versions of physics were, to Lenard’s way of thinking, inferior to Aryan, or German, physics. Most pernicious of all, in Lenard’s mind, was Jewish physics, as embodied by the “eternal Jew,” Albert Einstein. Lenard believed that theoretical physics, which he conflated with Jewish physics, was an intentional fraud, confabulated by Jews, obfuscated by unnecessarily complicated mathematics, and hyped by the Jewish press. Worse, his most damning charge: theoretical physics lacked common sense.

SC: Lenard also felt that Einstein’s theoretical approach to physics in contrast to experimental physics was exerting an undue and pernicious influence in the field. Can you elaborate?

BH: By the early 1920s, experimental data was giving credence to Einstein’s theories. These included his explanation of the perihelion of Mercury and the verification of his prediction that our sun’s gravity would bend light emanated from distant stars as it passed by. Many young German physicists, much more familiar than their elders with advanced mathematics, were drawn to Einstein and his adherents. Given Lenard’s belief that all human endeavor was a representation of culture, he was afraid not only for the Jewish bastardization of German physics but also for its ill effect on all of German culture.

SC: With the rise of Adolf Hitler and Nazism, many Jewish scientists were forced to leave Germany creating a vacuum that only intensified as the race to build the Atom bomb in WWII reached a crescendo. Can you describe the circumstances of this high-stakes race between the Germans and the Allies to create a nuclear weapon?

BH: Except at a superficial level, this is a bit beyond the scope of my book and has been the subject of numerous other books, but briefly: It was the news that German scientists had learned to split the atom—whether accurate or Nazi propaganda—that, in part, led the U.S. to embark on the Manhattan project. The stakes were quite clear. Hitler had not shrunk from destruction—even his own. If he had an atomic weapon, he would use it (as, indeed, so did we).

SC: Lenard was “Chief of Aryan Physics” under the Nazi regime. What became of him after the war?

BH: As Allied forces approached Heidelberg, Lenard fled his institute to the small hamlet of Mieselhausen, believing he was a target for capture, trial, and punishment. It seemed he had erred. Eighty years old at the time, his influence long past, no one was looking for him. But his intense narcissism would not allow him to leave well enough alone. He turned himself in to U.S. authorities. Lenard died at age 85 under house arrest.

Lenard’s younger acolyte and partner in banishing Jews from university service, Johannes Stark, fared less well. Punished by the Nazis for throwing his weight around in local politics in which he had no business, his son was sent to the Eastern Front and his estate confiscated. Initially sentenced to four years at hard labor by an Allied tribunal, despite his being 70 years old at the time, he eventually served a lesser term and a small monetary fine.

SC: Lenard’s crusade to discredit Einstein on racial grounds is odd for a scientist of such standing. Do you think his bitter prejudices and petty jealousies clouded his judgment? And what lessons can we draw from this story?

BH: Scientists are not immune to any of the long list of psychological pathologies that inflict harm on others. In The Man Who Stalked Einstein, the man, the place, and the time come together to inflict the greatest possible damage. What are the odds? History tells us that such seemingly “longshot” occurrences are much more likely than you might think.

The main point of the book is: It can happen again.

SC: What are you presently working on?

BH: The Man Who Stalked Einstein was published in 2015. In 2016, I published A Plague on All Our Houses—Medical Intrigue, Hollywood, and the Discovery of AIDS, also a book of narrative non-fiction. I am currently working on two projects: