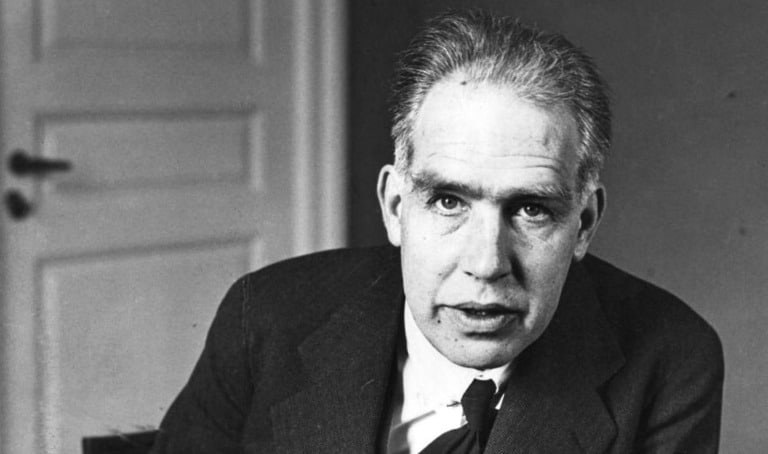 The Nucleus of War: Niels Bohr’s Role in the Manhattan Project

In yet another example of a fictional account inspired by real historical events, WGN America TV network recently launched a series titled “Manhattan.” The show is loosely based on the Manhattan Project, the code name for the secret U.S. program to develop the atomic bomb during WWII.

The project was sparked by a letter Albert Einstein wrote in 1939 to President Franklin Roosevelt. In it, the physicist warned that Germans had the technology to build a highly destructive bomb. In response, Roosevelt had convened a group of scientists—including many Europeans who fled to America to escape the Nazi repression—to develop a nuclear bomb before Hitler did.

One of these scientists was Danish physicist Niels Bohr (1885–1962), whose work on the structure of atoms and quantum mechanics earned him the 1922 Nobel Prize in Physics. His knowledge of fission—splitting of atoms—was used to create a chain reaction process that eventually paved the way to the development of the atomic bomb.

Bohr worked as a consultant at the top-secret Los Alamos laboratory in New Mexico, where nuclear weapons were being developed. (In a strange twist of events, his old colleague, German physicist Werner Heisenberg, was, at the same time, involved in building an atomic bomb for Nazi Germany).

Despite—or maybe because of—his participation in the program, Bohr was deeply concerned about the dangers of a nuclear arms race. As his son Aage, who also worked on the Manhattan Project, noted, “My father’s thoughts constantly dwelt on the serious consequences of the atom bomb, on the terrifying perspectives opened, and on its profound effect on post-war problems.”

In this regard, Bohr might have been a visionary of sorts. While the nuclear bombs he helped develop were never used against its primary target (Germany was defeated and surrendered in April 1945), that summer, the U.S. did drop them on Japanese cities of Hiroshima and Nagasaki in order to end WWII. The devastation—immediate casualties, as well as long-lasting effects of radiation among the local population—did indeed live up to Bohr’s grim prediction.

The history of the Manhattan Project might make a good TV show, but the real story behind the development and production of the first atomic bomb proves once again that life is often more dramatic than fiction.