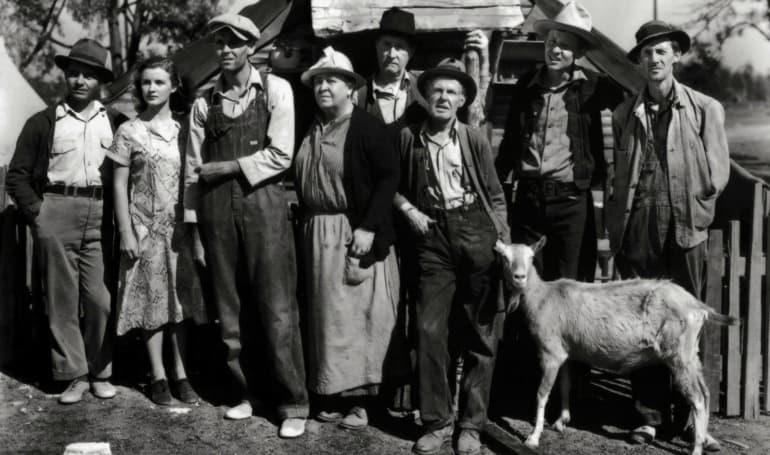 The story of a poor Midwest family forced off their land by the drought and dust storms that had crippled much of the country’s agriculture during the 1930s, struck a chord with Depression-era readers. So when The Grapes of Wrath was first published in 1939, it had become an instant bestseller. The following year, when the film adaptation of the novel was released, its author, John Steinbeck (1902–1968), was awarded the Pulitzer Prize.

This year marks the 75th anniversary of the book’s publication, so the Steinbeck Festival, an annual event held in the author’s home county of Monterrey CA, is dedicated to commemorating this landmark literary work.

And on February 27, which would have been Steinbeck’s 112th birthday, he was honored with an epic Google Doodle highlighting some of his literary contributions, including—in addition to The Grapes of Wrath—Cannery Row, Of Mice and Men, The Pearl, and Travels with Charlie in Search of America.

Economic and social issues are a common theme in Steinbeck’s work, and The Grapes of Wrath is no different. Its protagonists, downtrodden Oklahoma sharecroppers, named the Joads, move to California to find a better life, only to face poverty, hunger, and exploitation. And while literary critics and much of the public acclaimed The Grapes, its theme—as well as Steinbeck’s own political and social views—also sparked widespread controversy.

In fact, soon after its publication, the book incurred the wrath of the officials in California’s Kern County, where the fictional Joad family had migrated. They thought that Steinbeck had portrayed them in an unsympathetic and unfair manner, and they banned the book from the county’s libraries and schools.

In a way, with The Grapes, Steinbeck attained his self-proclaimed goal to “rip a reader’s nerves to rags.” But despite the criticism and controversies that surrounded the book’s release, this work had won the 1962 Nobel Prize for Literature. To this day, Steinbeck remains one of the most widely read American writers of the 20th century—a turbulent era, which he captured with poignancy and realism.