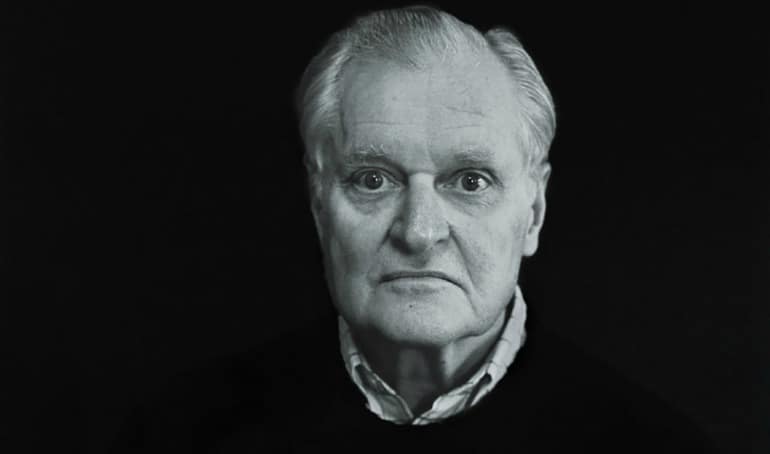 A triple crown winner—but a different kind of thoroughbred

Forty-one summers have passed since that once-only event when a single writer, a poet, won the trio of the most prestigious literary awards: Pulitzer Prize, the National Book Award, and the National Book Critics Circle Award in the same year. His name? John Ashbery (1927–2017), whose death on September 3 was confirmed by his husband, David Kermani.

Ashbery received the three awards for his 83-page collection, “Self-Portrait in a Convex Mirror,” whose title was taken from a 16th-century painting by the Italian artist Parmigianino. The book features a 15-page meditation on this work.

Born in Rochester, NY, but raised on a farm near Lake Ontario, Ashbery started his lifelong output of poetry as a schoolboy at Deerfield Academy, one of our nation’s oldest secondary schools. The famed literary critic, Harold Bloom, once said of Ashbery: “No-one now writing poems in the English language is likelier than Ashbery to survive the severe judgment of time.” He placed him alongside the likes of Walt Whitman and Emily Dickinson.

Although many poets of Ashbery’s generation were involved in social causes, he simply (and that word is surely inadequate) wrote poetry. He did so in his own unique and soon recognizable way, with moods of playfulness, exquisite mournfulness, and even absurdity. He used tonal, register, and other changes in capturing what he described as “the experience of experience.” One critic memorably described his work as “simultaneously incomprehensible and intelligent.”

He was much-copied but never equaled; Charles McGrath, The New York Times Book Review editor around the turn of the millennium, had a discarded pile of what he called “impersonations!”

To quote a line or two here, out of time and context, would not do Ashbery justice; finding his work and assessing his more than two dozen individual collections for yourself surely would. Whether you choose a poem of a few lines or one of many pages, the deeply personal poetry will leave an indelible mark. Choosing examples from different parts of his long life will also show the variety of moods and seasons he could write in.

Afterwards, you may or may not agree with something he once said: “Reading is a pleasure, but to finish reading, to come to the blank space at the end, is also a pleasure.” Could that even be a fitting obituary for such a unique contributor to American literature?