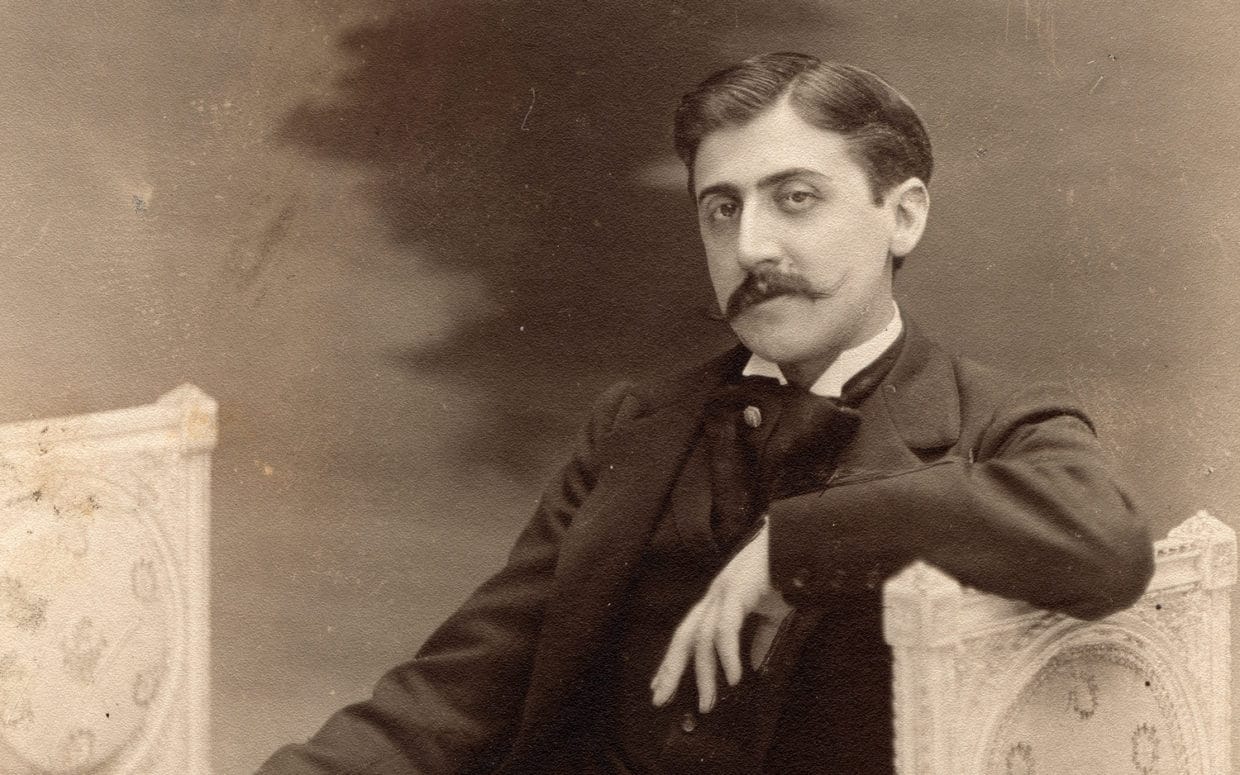 This piece has been excerpted from Simply Proust by Jack Jordan, part of Simply Charly’s Great Lives series.

When someone asks if you have read Marcel Proust (1871–1922), the question usually refers to his 3,000-page novel, In Search of Lost Time. Though a prolific writer in numerous genres, without the publication of his masterpiece it is unlikely that his name would have become as well-known as it has. Some individuals who have read In Search of Lost Time consider it to be the greatest novel ever written. Others are more limited in their praise, describing it as the greatest novel of the 20th century or in the French language. Whatever the case may be, it is rare, if not unique to Proust, that a writer had devoted his entire life to creating one novel whose vision reaches from the details of his own life and times to a metaphorical description of the essence of man.

For many, Proust’s name is also often synonymous with “difficult to understand.” The most obvious reasons for this are the size of the novel and the (in)famous length of some of his sentences. Take those long sentences and paragraphs as a surfer would big waves. Enjoy the ride as long as you can, then have fun falling into what a British academic Malcolm Bowie called the “large tidal movements” that make up “Proust’s gritty, breezy, and salty book.” Let yourself go and enjoy letting the currents take you where you have not been before.

Since Proust first tried to publish his novel, some readers have had difficulty understanding the lack of an obvious chronological development in characters and plot. Some have found his descriptions of the very ordinary experiences and things that make up daily life to be boring. Swann’s Way, the first of the seven volumes that make up In Search of Lost Time, was rejected several times, most famously by André Gide, editor of La Nouvelle Revue Française, the leading French publisher at the time. He later said it was the biggest mistake of his career. Alfred Humblot, the general editor of Ollendorf, Proust’s second choice, also rejected it.

“My dear friend,” Humblot wrote. “I might be dead from the neck up, but rack my brains as I may, I fail to understand why a man needs thirty pages to describe how he tosses and turns in his bed before falling asleep.”

His reaction was not uncommon. But, while seeing what lies on the surface in Proust’s novel, he did not perceive what lies below the mundane, ordinary experiences shared by everyone. The times spent falling asleep and waking up are precious parts of the territory that make up the novel’s quest. They are the bridges between each person’s conscious and unconscious states and can ultimately lead one to the underlying meaning of his novel, which Proust described as a “series of novels of the Unconscious.”

Proust finally had to publish Swann’s Way himself. Despite its slow start, the praise for this innovative novel started pouring in. The numerous translations that are still being done attest to this and the rest of In Search of Lost Time’s continuing, universal appeal; properly presented, these aspects are part of what can make the novel more appealing and better understood by modern readers.

Though Proust’s novel reflects so well today’s modern, relativistic worldview, it is also rich in the particulars of his time. While not an autobiography, this masterpiece is profoundly rooted in his life. He used what he learned from his family, his friends, himself, and the world he lived in and observed with the passion of an artist and the detached perspective of a scientist to create the world of his novel. He enthusiastically embraced, observed, analyzed, and wrote about who and what he experienced—from the smallest details to the most general laws he saw governing man and the world. The end of the 19th century and the beginning of the 20th was a period of great change in science, technology, psychology, and art. Man’s relationship to the world around him was being changed by the popular use of trains and the introduction of cars and planes; the increased speed changed his relationship to time and space. Distance was no longer fixed, time and space no longer absolutes.

The arts lie at the heart of Proust’s novel, but the sciences provide the tools needed to arrive at the end of the search. Chief among them is psychology. It provided a scientific methodology to reach the essence of “self” and the terminology to express it, taking the search beyond a vague, romanticized notion of man’s identity. As this book will show, it also takes the search outside the novel and makes the reader a member of the quest. The results can be exciting and unexpected.

As with Proust’s masterpiece, there are aspects to his life that have been associated with his name. They range from his childhood sicknesses, privileged existence, close relationship with his mother and the French pastries called madeleines, to his cork-lined room, inversion of night and day, and a snobbish, sedentary and reclusive existence when he was an adult. Some of these deserve further explanation, and others correction.

In Search of Lost Time is the story of the Narrator’s search for a vocation. This also describes a long quest in Proust’s own life, which served as a narrative for his novel. Until he found this narrative, his voice, and what would be the essential experience of involuntary memory, Proust (and the Narrator) could not start his novel and did not truly consider himself a writer. Without the experience of the special pleasure brought about by a chance encounter with an object in the world that would ultimately provide the foundation for his “immense edifice of memory,” the quest both for a vocation and a vision that would eventually result in this masterpiece was a dilettante’s dream.

Though memory lies at the heart of Proust’s novel, it is only in small part the sentimental journey backward in time that is suggested by the former English translation of the title, Remembrance of Things Past. With the current, more literal title, In Search of Lost Time, not only is the essential element of Time introduced, but it is also paired with Lost, suggesting multiple meanings. Taken as “wasted,” “lost time” can mean the years the Narrator (and Proust) spent going to the many cultural and social events in Paris that include the periods known as the fin de siècle and the belle époque and continue until after World War I. Some of these sorties included attending certain salons that permitted him to move about in society and to know aristocrats, writers, musicians, and other important social, political, and artistic individuals. He would then write articles and other small pieces for newspapers describing these people and events. Not only did the time that he was not spending on a serious work of literature concern Proust (and the Narrator), but also the reputation that he got for being a superficial chronicler of Parisian social life around the turn of the century would haunt him even after he started to publish his masterpiece. Anything that took him away from the confines of his room where he could work on his novel was time wasted. As it turned out, these activities gave him the substance for much of his novel and provided the reader with an excellent perspective on Proust’s life and times.

“Lost time” can also be understood as the temporal aspect of the extraordinary experience he had with the “special pleasure” that takes one outside the limits of time and space. This interpretation leads one to the heart of the Narrator’s (and Proust’s) quest: the search for the answer to the fundamental philosophical questions, “who am I?” and “what is the nature of the world?” It is the search for the essence of man, world, how either can be known and how can these discoveries be expressed. The unified worldview that results is the philosophical foundation supporting the rich, complex structure of Proust’s novel. The paths that lead to this provide a fascinating look into the creative process and form a large and important part of this book.

This “special pleasure” is born from an experience of involuntary memory. In contrast to voluntary memory, it does not rely on rational efforts to retrieve lost memories. It cannot be forced. Through a chance sensory contact, a past feeling comes alive in the present, taking one out of the normal confines of time and space. Only afterward does intelligence play a role. This is one of the most fundamental of the many oppositions, or dualities, that pervade Proust’s novel. Other important oppositions include (but are not limited to): Swann’s Way, the Guermantes Way (geographic and social); habit, novelty; light, dark; night, day; clear, obscure; inward, outward; particular, general; micro, macro; enclosed, open; and tragic, comic. All will be shown to be either a synthesis or at least two essential sides of life and the world. Proust also arrived at the two essential parts of any knowledge: a subject to know and an object to be known. This simple opposition or duality (subject-object) lies at the heart of Proust’s philosophy and worldview.

Proust blurs the boundaries that separate the world of the novel from that of the author and from that of the reader. Despite his clear and often-stated opposition to looking at a piece of art (literary, pictorial, etc.) from the side of its creator and his emphasis on the importance of the relationship on the other side of the novel, from that of the reader, the boundary between Proust and the novel is also blurred. One of the means by which this is achieved is by using real historical figures and events alongside fictional characters. This particular mixture is one reason for the historical richness of Proust’s novel.

The novel is not short, which in itself limits its general appeal. However, just as it takes time to create a world, it takes time for a person to be transported into it. Ideally, it should be read at night, undisturbed by anyone or anything that might interfere with becoming part of the novel, like the Narrator who, on the first page, describes himself as falling asleep while reading, seemingly becoming the subject of the book. If you do not have the time to read the novel from beginning to end, try reading the first and last volumes together. Try not to let the novel’s reputation as being difficult bother you. Just read it and try to hang on because if you give it a chance, you may be in for a ride as rewarding as those taken by Aladdin on his magic carpet in The Arabian Nights.

A professor of French who served seven years as department head at Mississippi State University before his retirement in 2015, Jack Louis Jordan (1952-2017) specialized in twentieth-century French literature, with an emphasis on Marcel Proust. He has written many articles on both Proust and the French literature of the Caribbean and is the author of Simply Proust (2020),  Marcel Proust’s “A la Recherche du Temps Perdu”: A Search for Certainty (1993) and the chapter “The Unconscious” in The Cambridge Companion to Proust (2001).