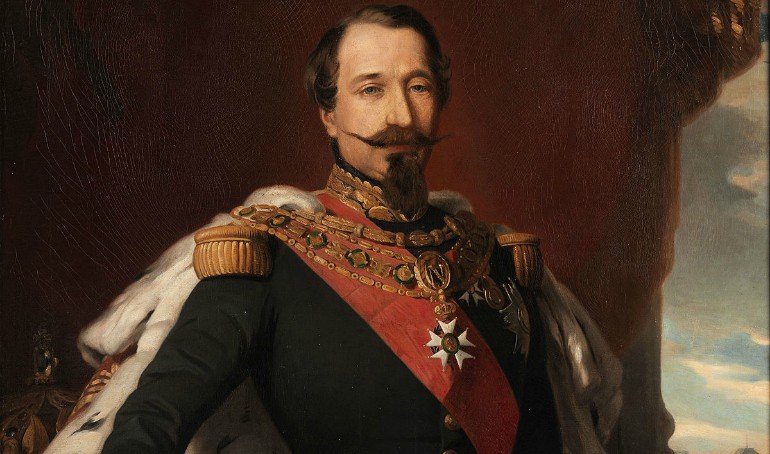 Donald Trump has dramatically demonstrated how frighteningly easy it is to render character assassinations of opponents, manufacture fake news, and distort otherwise well-documented facts. There is, however, precedence for this kind of malfeasance: the French government and the country’s historians have been doing it since 1870 and focusing on one victim in particular. Indeed, no man, no French ruler or national leader in modern French history has been so deliberately singled out, maligned, and vilified as Louis Napoleon Bonaparte (1808-1873), aka Napoleon III. To correct the historical record, I wrote Shadow Emperor, a biography of this ruler, who was the nephew and heir of Napoleon I, the first emperor of France.

French textbooks still portray Napoleon III as an utterly hapless, shallow, frivolous, and even comical character, whose reign under the Second Empire, 1852-1870, was one long period of debauchery, masked balls and champagne receptions, and a political disaster for France. All these contentions are false. To be sure, Louis Napoleon certainly lacked his uncle’s charisma and flair for publicity; nor did he inherit Napoleon I’s military leadership skills, or propensity to occupy and loot the whole of Europe with his armies and bayonets. Also, unlike his illustrious uncle, he was not an arrogant or pretentious man. Indeed, no two men, specially issued from the same family, could have been more different. Quiet, soft-spoken, unobtrusive, and courteous—in sharp contrast to his uncle, who was always dressing down and insulting his officials and senior military officers in public—Louis Napoleon always treated everyone, regardless of rank, respectfully and with decorum. And if Napoleon I dedicated his career to war and conquest, Louis Napoleon’s reign focused on the reconstruction of an historically battered and hopelessly out-of-date France. “The Empire stands for peace,” he was to repeat over and over again. Napoleon I sought out wars and created some of his own. Louis Napoleon took considerable steps to maintain peace, though not always successfully.

Napoleon III came to power with a long list of programs he intended to implement, in order to restore France and bring her into the modern world. He inherited an empty treasury, a country in a deep recession, no economic growth, appalling unemployment, with working classes—including two-thirds of Paris’s one million inhabitants—living in shocking conditions in a land without hope or a future. Louis Napoleon changed all that. He created the legislation and conditions favoring commerce, industry, and finance. Through the creation of modern banking and financial institutions, vast amounts of money were made available for the expansion of commerce and the establishment of an important new industrial base. Finding only a few miles of rail service on his arrival, in a matter of several years, he gave France its first complete rail network connecting every city and port of the land. Goods could now be brought to new markets, industries could export abroad, and once isolated mines could ship their minerals across the country or even Europe. Likewise, Louis Napoleon found no electric telegraph in France in 1852, but by 1870 the entire country was linked by this service. He rebuilt the entire French navy with dozens of steam-powered iron-clad ships with finer guns than even England’s Royal Navy possessed. And thanks to his support, the nation’s first international steamship lines were launched, providing service to America, Africa, and the Far East.

Science and education were also a top priority for Louis Napoleon, as he had old schools refurbished, and new ones built. Primary school education was now made mandatory. Especially concerned with the problems of the working classes, as well as removing illiteracy, he created the first old age and accident insurance for them. Always personally interested in science, Louis created funding and prizes for major scientific research, in newly built laboratories. He encouraged a complete renovation of the hospitals in Paris and the country.

In foreign affairs, he did not always succeed, but fought alongside England during the Crimean War in the 1850s to halt Russian expansionism. On the other hand, thanks to his military support of King Victor Emmanuel II, the Austrian army occupying Italy was defeated, resulting in the independence of that unified country. And they rewarded France with the annexation of Nice and Savoy.

Embed from Getty Images
In an age of growing imperialism, Louis Napoleon saw the doubling of the French colonial empire. There was expansion in West Africa; in the Far East, his troops landed in Indochina, marking France’s first claim to that region, while also winning New Caledonia. An unwise and ill-fated Mexican expedition ended in the forced withdrawal from that country in 1867. It was Algeria, however, that was Louis Napoleon’s chief colonial enterprise and preoccupation. He twice visited the North African country in the 1860s and took a very sincere interest in the Algerian people, planning to bring them into a modern French world with streets, houses, gaslighting, modern transport—none of which they ever wanted. He thought he was doing them a favor: “I am the Emperor of both the French and of this Arab kingdom,” he claimed. But the land was never conquered during the Second Empire, and with a permanent army of occupation of 60-84,000, the fighting never ended. Algeria became a French “Vietnam” as the wounded and dead were brought back to France every month, ultimately involving hundreds of thousands of French casualties. But the Algerians also paid a staggering price. One of Louis Napoleon’s last important acts was to offer Algerians French naturalization, and today there are over five million North Africans in the slums of Paris, Lyon, Marseilles, and other cities.

On a more positive note, at a time when “environment” was not even mentioned, Louis Napoleon insisted on replacing Paris’s polluted drinking water with fresh sources, while reclaiming large tracts of wasteland and swamp, converting them into wheat and corn production. Again, he unilaterally took up the problem of deforestation, launching substantial replantation programs for the mountains and the Landes region. He also created model farms, while improving breeds of livestock.

But Napoleon III’s most famous project was the rebuilding of the entire center of Paris, gutting some 20,000 slums, and driving through new gas-lit tree-lined boulevards. Medieval tenements were replaced with the handsome new apartment buildings, which stand to this day. Moreover, Louis Napoleon created new parks, including the Bois de Boulogne and the Bois de Vincennes.

Louis Napoleon’s reign had many serious problems. A rapidly exploding financial and construction boom, inevitably meant an enormous amount of corruption, though he did his best to control and discourage it, even exiling his notorious half-brother, Auguste de Morny. And much remained to be done for the impoverished, but at least he restored stability and order to France after so many years of revolution and uncertainty. He also left France a modern and prosperous nation, just as he promised. If it weren’t for the invasion of France by the Prussians in 1870, leading to a French defeat, Napoleon III would not have been disparaged and abandoned by the French. The real cause of this war was the vengeance that foreign military leaders Otto von Bismarck, Albrecht von Roon, and Helmuth von Moltke demanded for Napoleon I’s brutal invasion and occupation of Prussia earlier in 1806. Ironically, had Napoleon I not invaded Prussia in 1806, creating a hatred of France that Prussia could not forget, and if Napoleon III had not been defeated in 1870, there would never have been an invasion of France in that year.

To this day, the French still fail to study the historical record and unjustly continue to attack and belittle Napoleon III, refusing to acknowledge his very considerable achievements. The facts, however, demonstrate a very different, a very positive, and most productive Louis Napoleon—the veritable father of modern France.