MAIN MENU
Music Wolfgang Amadeus Mozart
Considered by many to be the greatest composer of all time, Wolfgang Amadeus Mozart (1756–1791) composed hundreds of pieces of music. Among his most famous works are Eine Kleine Nachtmusik (A Little Night Music, 1787) and the operas Don Giovanni (1787) and Die Zauberflote (The Magic Flute, 1791). He died of a mysterious fever at… 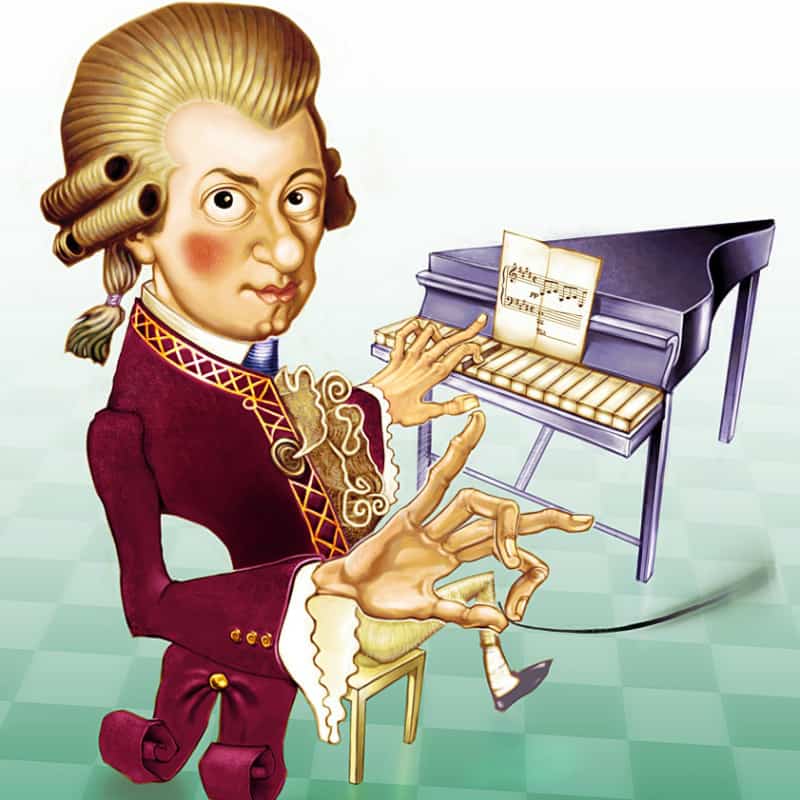 Austrian composer and musician at the forefront of the Classical movement.

Wolfgang Amadeus Mozart called Wolfgang Amade, or Wolfgang Gottlieb by his friends was baptized as Joannes Chrysostomus Wolfgangus Theophilus Mozart on January 28, 1756, the day after he was born. That barely scratches the surface of the names under which he was known—it was common in the 18th century, especially among those associated with wealth or the arts, to use different forms and variations of one’s name, taken from various languages. His baptismal name is a mishmash of Greek, Latin, and German; Gottlieb is the German translation of Theophilus (“loved by God”), while Amade, Amadeo, and Amadeus are all Latin versions of the name. On top of that, he sometimes playfully added a -us to his last name, signing it as Mozartus—or wrote it backward as Trazom. It was only after his death that “Amadeus,” preferred by his Romantic successors, became the form of his name known to the general public.

Mozart’s father was the violinist and composer Leopold Mozart, who failed to distinguish himself as a composer but had a gift for musical instruction and was charged with teaching piano and violin to the boys of the Salzburg Choir. Wolfgang and his sister Nannerl (baptized Maria Anna) were both exposed to and taught music from an early age; Leopold gave up any ambitions of his own when Wolfgang’s genius became apparent, devoting his free time instead to training his son. The family traveled Europe a great deal, with Wolfgang and Nannerl shown off as musical prodigies in the courts of London, Munich, and Paris. Johann Christian Bach—”the London Bach,” the son of Johann Sebastian Bach who had settled in England—befriended Wolfgang during this time.

In his early teens, Wolfgang accompanied his father on trips to Italy; the boy made an illegal copy of Gregorio Allegri’s “Miserere,” a choral composition performed in the Sistine Chapel and carefully guarded by the Vatican. Wolfgang was able—and so far as history can determine, he was the only one to do so—to write down the music after the fact based on hearing it only once, which likely surprised even his father. He began composing operas soon after, which were performed in Milan. The first of his major works was also produced during this “field trip” period: “Exsultate, jubilate,” a solo cantata composed for a castrato (a castrated male singer) and these days usually performed by a soprano.

At the age of 17, Wolfgang was taken on as a court musician by Prince-Archbishop Hieronymous Colloredo, the ruler of Salzburg. The young man rapidly became one of the centers of attention in court, his genius already evident; though often soft-spoken, and not unusually attractive thanks to the scars of childhood smallpox, his laughter and excitement were infectious, his sense of humor wicked. Far from the contemporary image of a Classical composer as someone snooty and pretentious, Mozart cracked puns and made dirty jokes, wore his hair in a mess, danced with the women of the court, and played pool with the men. But he wasn’t happy in Salzburg for long. The salary was small, and there were few opportunities to write opera, one of his primary ambitions. He and his father continued scouting job opportunities elsewhere. They spent a year in Paris, but Wolfgang was unable to find long-term work—apparently because his father insisted he keep looking for someone that would pay enough to support the whole family since Leopold had given up his own ambitions in order to teach his children.

He was fired from his position at the Salzburg court when he balked at the Prince-Archbishop’s treatment of him, and especially his employer’s forbidding him to perform for the Emperor. The argument took place in Vienna, and Mozart remained there when Colloredo returned to Salzburg. Wolfgang planned to use the city to his advantage, working as a freelance composer while befriending the aristocracy—networking, in other words. It was a common approach among composers. He soon fell in love with and married Constanze Weber, the daughter of his landlord (after a brief involvement with her older sister Aloysia). The Mozart family was cordial at best to Constanze, but resented Wolfgang for moving to Vienna without being able to provide for them.

While in Vienna, Mozart studied the works of the great Baroque composers like Bach and Handel, and befriended fellow composer Joseph Haydn. He performed his own solo piano concertos, earning enough money to outfit a fine home for himself, his wife, and their two young children (four more had not survived childbirth, which was common in that era). As his focus returned to opera, he composed two of his most famous and enduring works: “The Marriage of Figaro” and “Don Giovanni.” At the height of his career, he was visited by young Ludwig van Beethoven, a child prodigy himself. It’s unclear what transpired during their meeting, but Mozart probably recognized the genius in the boy just as others had once recognized it in him.

Mozart’s compositions remain one of the bedrocks of the Classical movement. He made heavy use of the galant style at first but soon began to re-acclimate the Baroque style into Classical music. In addition to his symphonies and operas, he helped to popularize the piano concerto and sonata along with the string quartet and quintet. No other composer of the time possessed the same command of the Classical movement as Mozart; indeed, Classical music itself seemed to parallel his own. His music was noted for its clarity and elegance, with Franz Schuman once writing: “A light, bright, fine day this will remain throughout my whole life. As from afar, the magic notes of Mozart’s music still gently haunts me.”

By the end of the 1780s, Austria was at war with Turkey, which was bad news for musicians. The aristocracy had less interest in music and less money to spend supporting it. Wolfgang moved his family to a simpler home in the suburbs and traveled Central Europe searching for well-paying work. He wrote, “The Magic Flute” at this time, as well as some of his finest concertos. The speed bump in his fortunes would likely have been short-lived, except that in 1791 he became very ill with fever and rash; it isn’t clear what, in modern medical terminology, he suffered from, and it may have been a kidney ailment which the medicine of his era would have been unable to help him with.

Three months after falling sick, he died in bed on December 5, 1791, attended by Constanze and his doctor. He had, however, managed to rouse himself long enough to conduct the premiere of “The Magic Flute.” His loss was mourned greatly by the European musical community, and his works soared in popularity shortly after his death.