MAIN MENU
Literature W.B. Yeats
Irish poet, dramatist, and prose writer, William Butler (W.B.) Yeats (1865–1939), is considered to this day as one of the greatest English-language poets of the 20th century. He received the Nobel Prize for Literature in 1923. 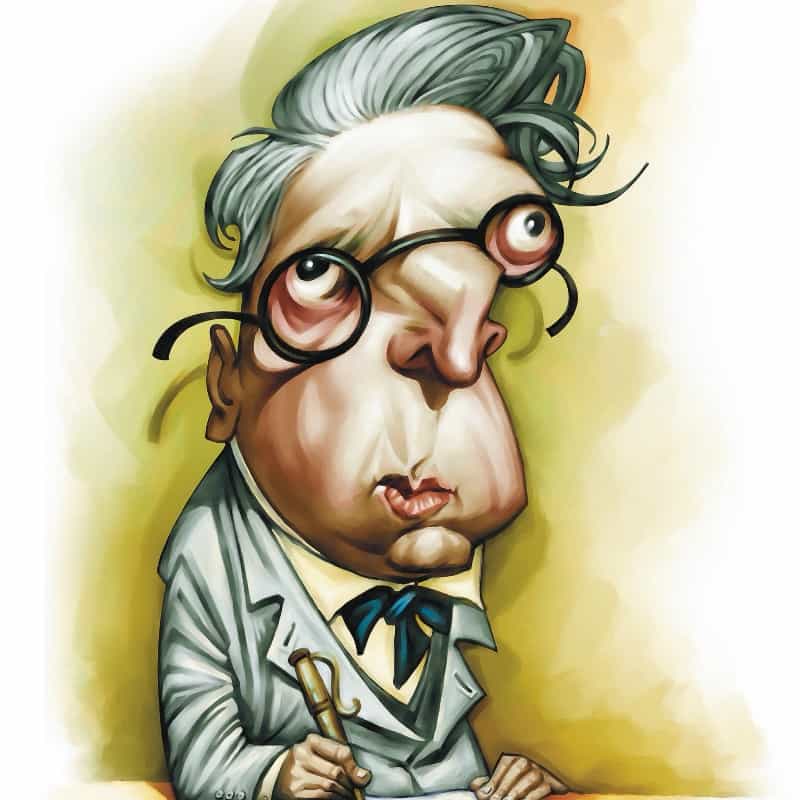 William Butler Yeats was the son of Irish painter John Butler Yeats, a former lawyer who abandoned his practice to work as a portraitist in Dublin. Though his father struggled with money, William’s mother came from a wealthy family, and the education that came from such an upbringing may have been instrumental in the couple encouraging their children to be artistic. Sisters Lollie and Lily were prominent members of the Anglo-American Arts and Crafts Movement, and William’s brother Jack became an expressionist painter and novelist (as well as producing the first Sherlock Holmes comic strip).

As for William, he grew up amidst the growing prominence of Irish nationalism. A mediocre student, he was nevertheless an enthusiastic reader, and his juvenile work is heavily influenced by Percy Bysshe Shelley and Edmund Spenser. In time, his fascination with the fantasy of those Romantics shifted to an interest in Irish myth and folklore. As a young man in his 20s, he discovered a forgotten poem by William Blake, “Valas, or the Four Zoas,” and his interest in Blake persisted for the rest of his life.

Like Blake, his interest in mysticism and the supernatural experience was profound—in fact, he probably would have called himself a mystic or occultist who wrote poetry, rather than a poet with an interest in the occult. He was involved with Theosophy, astrology, and spiritualism, all of which were reflected in his work. In 1890, he joined the mystical organization the Hermetic Order of the Golden Dawn and became heavily involved in its internal politics and arguments. An occult group formed in England in the previous decade, the Order was like a gentleman’s club for mystic enthusiasts (though women were allowed to join), and included the secrecy and rituals that were characteristic of organizations like the Freemasons and the Rosicrucians. The beliefs of the Order combined elements of Christianity with those of Medieval Kabbalah, Theosophy, magical practices, and ancient pre-Christian religions.

His first major publication was paid for by his father when he was 21. Mosada: A Dramatic Poem was followed three years later by The Wanderings of Oisin and Other Poems, which shows the strong Gaelic interest in Yeats’ work and the adoption of a varying rhythm. He based the story on legends from pre-Christian Ireland—the Fenian Cycle, the same cycle of stories after which the Irish nationalists the Fenians named themselves. Around the turn of the century, he also helped to establish the Irish Literary Theater, an experimental theater meant to stage distinctly Irish plays, drawing on both old Irish traditions and the contemporary Irish spirit.

For almost thirty years, Yeats was obsessed with a young Irish nationalist Maud Gonne, a member of the Order until her conversion to Catholicism. He hesitated in sharing her politics; she hesitated in sharing his bed. He repeatedly proposed before she married another man, and though they had sex once after fifteen years of friendship, Gonne assured him it would not happen again, and within months was writing him friendly letters recommending celibacy as a boon for the artistic spirit. Yeats called her his muse, and continued to develop his poetry, drawing on contemporary movements in Europe while spearheading the Celtic Revival in Ireland, which cherished the uniquely Irish facets of Irish literature, over the English elements that had been adopted. Ezra Pound called him the only worthwhile poet of his generation, but also felt no compunction about revising Yeats’ work without consultation when he published it in the magazine Poetry.

Maud’s husband was executed for his involvement in the 1916 Easter Rising, and that summer Yeats proposed for the last time. She refused him, and it’s likely that at this point—he was 51, disliked the extremism of her politics, and wanted an heir—he expected her to and proposed only so that her refusal would free him from her. He then proposed to her daughter—who had proposed to him months earlier—only to be rejected again, and in the fall he proposed to Georgie Hyde-Lees, a woman half his age whom he’d met through his mystic friends. Yeats wrote of his regret during the honeymoon, the foreboding, and surety that he had made the wrong choice—but the marriage proved a success, not only in producing an heir (they had two children, Anne and Michael) but in the couple’s happiness. Together, Yeats and Georgie explored automatic writing. In automatic writing, the writer enters a trance similar to that of hypnosis and allows his hand to move the pen in response to unconscious will. Some mystics considered it a form of channeling (with some spirit or being guiding the pen) while others took a psychological view and saw it as a way to express ideas of the subconscious, much like in dreaming. In their automatic writing, Yeats and Georgie produced elaborate designs, including the gyres that soon became important to Yeats’ work.

The gyres were conical spirals contained within each other, which held great mystical significance for Yeats. The designs described fundamental motions expressed in history itself, he claimed, and this worldview was expressed in one of his best-known poems, “The Second Coming.” He wrote it in the aftermath of the first World War, a couple of years into his marriage, while Georgie was pregnant with Anne. It’s an anguished poem, capturing the despair not only of that war, but the Easter Rising and the Russian Revolution—portraying history as approaching its end. The poem begins,

“Turning and turning in the widening gyre The falcon cannot hear the falconer; Things fall apart; the center cannot hold.”

It paraphrases both Blake and Shelley, while its title refers to the religious notion of the Second Coming of Christ—whose birth was at the meeting spot of the two conical spirals of history, with the first “life gyre” narrowing as it approached his birth, and the second expanding upon his arrival before encompassing the whole of the world at its end. Yeats saw this end of days as a positive thing, imbued with mystical significance—the end of one era and the beginning of something new.

ACTIVE TO THE END

Yeats had become a well-respected man in Ireland and served in the Senate for two three-year terms. He retired due to poor health, and six years later at the age of 69, he underwent dubious surgery to restore his sexual vigor. Though the procedure has long since been discredited, based as it was on faulty biology, the placebo effect led to a number of affairs with younger women. Despite the constant troubles of various illnesses, the last five years of his life were active both sexually and creatively—he continued to work up until the month of his death, in January of 1939.