1. Salvador Domingo Felipe Jacinto Dalí y Domenech was born on May 11, 1904, in Figueres, Spain. He was named Salvador after his namesake brother, who had died the year before. Said Dalí of his brother, “We resembled each other like two drops of water, but we had different reflections. He was probably a first version of myself, but conceived too much in the absolute.”

2. By the time Dalí went to the School of Fine Arts in Madrid in 1922, he was already an eccentric. To draw extra attention to himself, he would often walk the streets ringing a bell. At school, he became close friends with famed Spanish poet/playwright Federico Garcia Lorca. Expelled from art school in 1926 for insisting none of his professors were competent enough to examine him, he went to bohemian Paris, where he met up with fellow artists Pablo Picasso and Joan Miro, and joined the Surrealist group.

3. Five years later, in 1934, Dalí was again expelled—this time from the Surrealist movement, for supporting fascism. The ousting, however, didn’t stop Dalí from participating in Surrealist exhibitions.

4. When asked to deliver a lecture for the London Internationals Surrealist Exhibition in 1936, no one could have anticipated that would address his audience wearing a deep-sea diving suit. His justification: “I just wanted to show that I was plunging deeply into the human mind.”

5. Despite his obvious flair for the unusual, Dali was nothing short of a commercial artist who longed for fame. During his lifetime, he even created a museum to display his own work, the Dalí Theatre-Museum in his native Figueres. This is where Dalí’s famous “lips” sofa originated.

6. In painting “Sacrament of the Last Supper” in 1955, he used his wife Gala’s face as the model for Christ.

7. In 1969, Dalí designed a bright yellow and orange logo for Chupa Chumps lollypops, one of the most iconic logos of all time.

8. Even as the years went on, he never ceased to amaze. In a “60 Minutes” interview with Mike Wallace, Dalí referred to himself in the third person. Topping that, he carried a leather rhinoceros with him when he appeared on the “Tonight Show,” and insisted on sitting on it throughout his interview.

9. It’s said that when Gala, his wife of nearly 50 years, died in 1982, Dalí lost his will to live. He completed his last painting, “The Swallowtail” the following year, in 1983. At that time, he suffered from palsy, which made his hands shake terribly, making painting a difficult task.

10. A fire forced him from his home in 1984, and he lived his final years in the Theatre-Museum until he died of heart failure five years later, at the age of 84. 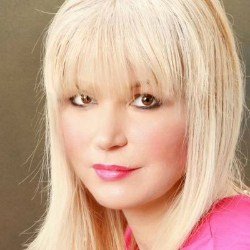