MAIN MENU
Music Richard Wagner
Richard Wagner (1813–1883) was a German composer known for his mostly complex and lengthy dramatic operas. Though a controversial figure due to his nationalist beliefs and anti-Semitism, he is still considered to be one of the best composers in modern history. 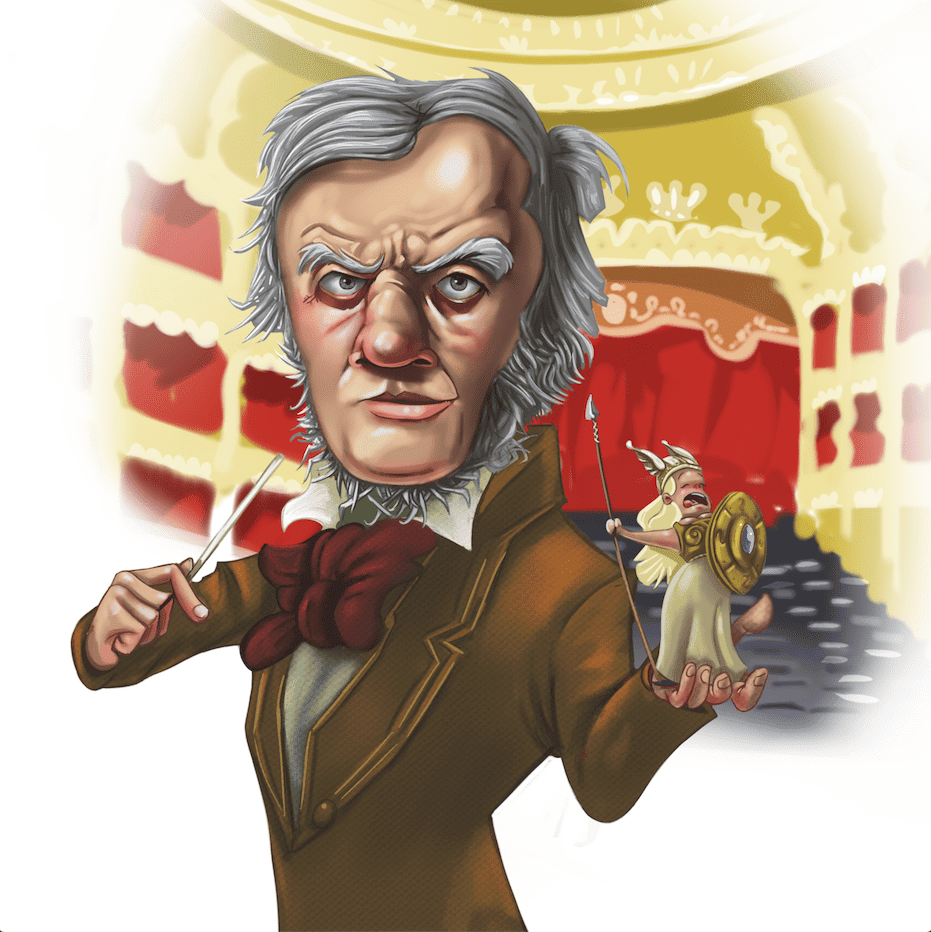 Richard Wagner’s was born in Leipzig, Germany, to Johanna Rosine Wagner. Carl Friedrich Wagner, a police actuary who is widely accepted as Richard’s father, died the same year Richard was born. His mother was remarried the next year to her lover, Ludwig Geyer, a painter and actor, which evidence suggests is Wagner’s biological father.

Wagner spent his years as a schoolboy in Dresden, writing his first opera at age 11. By age 16, he was working on serious music, composing two sonatas and a string quartet by 1830. The following year, Wagner began studying music at Leipzig University.

Wagner’s innovative ideas reinvented the opera experience. It was his idea to darken the auditorium during a performance, which eventually caught on everywhere and is now the standard. He also was the first to use a sunken orchestra pit, which was appreciated by the Jewish critic, Eduard Hanslick, with whom Wagner had a feud.

1832 was the first time Wagner wrote for the theater. His compositions appeared in Konig Enzio, a play written by Ernst Raupach. That spring, Wagner also debuted as a conductor performing his Symphony in C major. In 1833, he produced his first opera, Die Feen.

In 1834, Wagner married the singer and actress Minna Planer. They lived out of their price range, always fleeing creditors. They left for Königsberg, where Wagner became the music director of the Magdeburg Theater. Here, he produced his second opera, Das Liebesverbot (1836), for which he composed the music and wrote the lyrics.

In 1837, Wagner moved to Riga, Russia, where he found a new theater job as the music director. Here, he worked on composing Rienzi (1840), but he and Minna fled from their debtors first to London and then Paris in 1839. During this time, Wagner did not have a steady job but composed for odd jobs, such as vaudeville music.

Wagner lived in Paris for three years before moving to Dresden. By 1843, he became the music director of the court, which stabilized his financial life. During this period, Wagner’s anti-Semitic politics was becoming more well-known and controversial. Five years later, Wagner produced Lohengrin (1848). At this time, there was a revolution in Saxony, and because of his political opinion, Wagner was forced again to flee, this time to Zurich. He could not re-enter Germany for the next eleven years, and this was when he produced his article Judaism in Music (1850), among other anti-Semitic writings.

Soon, young King Ludwig sent for Wagner. Always having been a big fan, Ludwig financed Wagner. Under this alliance, Tristan and Isolde (1865) developed. Pedro II, Emperor of Brazil, also supported Wagner during this time. He asked Wagner to write an opera for Rio de Janeiro, offering him safe residence in his palace. He also urged Wagner to finish Tristan and Isolde.

By 1862, Wagner was allowed to return to Germany. He and Minna separated because Wagner had had affairs with Mathilde von Wesendonck and Cosima Liszt, both of whom were younger than he, as well as married. Cosima became Wagner’s second wife, and during this marriage, he had an affair with Judith Gautier. His only two children, Eva and Siegfried, were born to Cosima during the late 1860s. On February 13th, 1883, Wagner died of a heart attack in Venice. He was 69 years old.