MAIN MENU
Ludwig Wittgenstein Philosophy
Though he published only one book in his lifetime, Ludwig Wittgenstein (1889–1951) was one of the most influential philosophers of his generation. The youngest son of a wealthy family, he was never comfortable with the academic environment where his ideas were so prized. By turns eccentric and reclusive, he worried about being misunderstood or influencing… 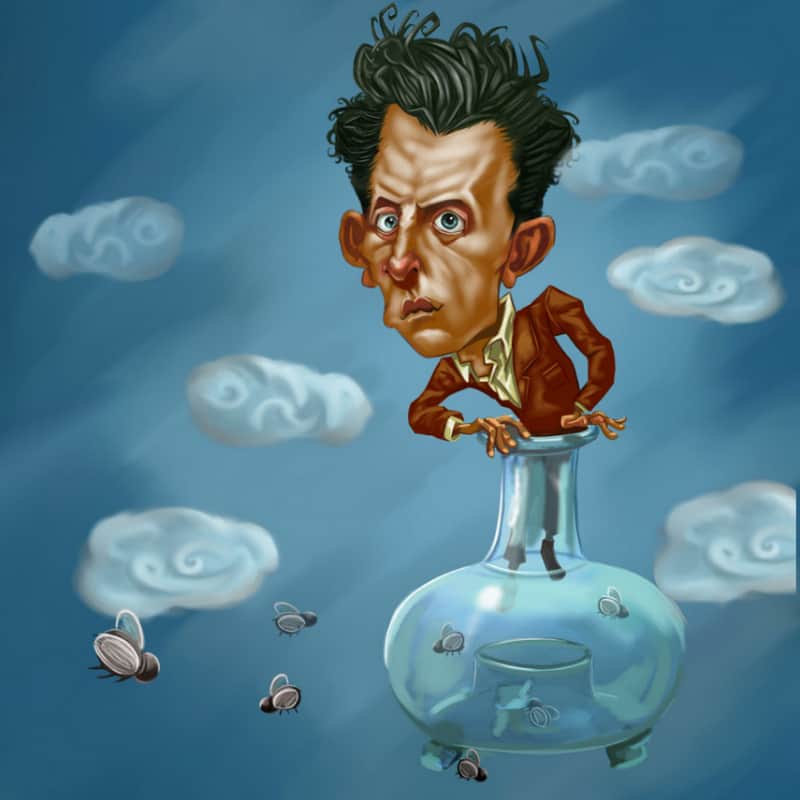 Ludwig Wittgenstein is generally considered as one of the most influential philosophers of modern times. A scion of a wealthy and troubled family in turn-of-the-century Austria (three of his brothers committed suicide), Wittgenstein is remembered today for his two great works, the Tractatus Logico-Philosophicus (1921) and Philosophical Investigations (1953), which remain both relevant and controversial to this day.

Ludwig Wittgenstein was the youngest of eight children, born to one of the wealthiest families in Vienna (in what was then the Austro-Hungarian Empire). His maternal cousin, born two weeks later, was Friedrich von Hayek, who grew up to be one of the most important economists of the 20th century and a Nobel laureate for his work on the theory of money and economic fluctuations. It’s no surprise, then, that Ludwig and Friedrich came from a well-educated, intellectual family. Karl Wittgenstein, Ludwig’s father, was a wealthy industrialist who served as a patron of the arts, especially music. Johannes Brahms and Gustav Mahler were among the composers who spent time in the Wittgenstein household, and the children all grew up with musical talent—son Paul’s career as a concert pianist continued even after he lost an arm during a tour of duty in World War I. The eldest boy, Hans, began composing his own music at age four.

However, alongside this penchant for genius was a dark side. Three of the five Wittgenstein boys committed suicide, including Hans, who took his life when Ludwig was three years old. Homeschooled before attending school with other young men, Ludwig was considered a bit of an oddball by his classmates. (Teenage Adolf Hitler, a fellow student at the Realschule in Linz, was not actually Ludwig’s classmate, though the boys were the same age and had many of the same teachers over the course of their schooling; because of his education at home, Ludwig was two grades ahead of Hitler.) Wittgenstein missed many of his classes, and when he did show up, he put on airs, insisting he be addressed formally by his classmates and dressing in ostentatiously formal clothes. His diction and grammar were extremely precise, even baroque, and yet his vocabulary was mediocre.

Oddball or not, Wittgenstein did fairly well in school, and went on to study mechanical engineering in Berlin and Manchester, before enrolling at the University of Cambridge at age 22. At Manchester, he had become interested in the foundations of mathematics, through the writings of Bertrand Russell; at Cambridge, he sought Russell out, attending his lectures and studying logic, mathematics, and philosophy with him. However, Wittgenstein felt that an academic environment was actually distracting him from his quest for the truth, and so he rented a house in rural Norway, where he stayed while embarking on his private studies.

A CAREER MARKED BY WAR

In the meantime, his life was touched by tragedy again. Ludwig Boltzmann, a physicist he had hoped to work with, had committed suicide a few years earlier. Karl Wittgenstein died, leaving his fortune to his children. Ludwig used some of this inheritance to continue—anonymously—his father’s patronage of the arts, donating money to Austrian poet Georg Trakl—who also committed suicide days before Ludwig was planning to meet him.

Like his brothers, Ludwig served in the Austro-Hungarian Army during World War I. Having been raised Catholic by a family of Viennese Jews, some of whom had converted to Protestantism, Wittgenstein had been an atheist for most of his adult life. However, he discovered religion during the war, not because of the horrors and bloodshed around him, but through the writings of a Russian novelist and Christian philosopher Leo Tolstoy. He also began to read Fyodor Dostoevsky, another Russian Christian, as well as works of theologian St. Augustine and Danish philosopher Soren Kierkegaard. Logik, the book he had started before the war, began to focus more on ethics than logical analysis. Later, he rewrote it, expanding it to create the Tractatus Logico-Philosophicus, which, Wittgenstein claimed, solved all the major problems of philosophy.

The Tractatus was completed in 1918 and included an introduction by Russell, which gnawed at Wittgenstein because he believed his professor had misunderstood his book entirely. Without the introduction, however, he’d be unable to find a publisher, and so he was forced to keep it. With the introduction intact, he secured both German and English publishers, and because he believed he had answered all of philosophy’s questions, he retired as a scholar in his early 30s, becoming a teacher of young rural children. As it turned out, he wasn’t suited to the job. He had been a stiff, formal student who had grown up in a cosmopolitan, education-rich environment, and he had no talent for dealing with pupils who couldn’t keep up with him or weren’t interested in the material. As Austrian writer Thomas Bernhard later quipped: “The multi-millionaire as a village schoolmaster is surely a piece of perversity.” Wittgenstein was a good mentor to those who had already developed an interest in mathematics, but he had no skill for inspiring that interest himself. Students’ parents didn’t like him, and he eventually left the post to work as a gardener.

When his sister asked for his help in designing her new house, he collaborated with architect Paul Engelmann, a friend from the war, producing a precisely designed modernist building. During that time, he was approached by the Vienna Circle, a new group of Austrian philosophers associated with the University of Vienna, who had been influenced by Tractatus. The Circle was unable to get Wittgenstein interested in formally participating in their discussions, but he did befriend some members individually and became interested again in public intellectual life.

However, the friendships he developed within the Circle had not been without frustrations. As he had with Russell, Wittgenstein believed the members misunderstood the Tractatus to varying degrees—and they generally disdained its religious dimension. Often he refused to discuss the work with them or respond to their inquiries, preferring to change the topic to some common ground or a pet interest of his, such as poetry or music.

However concerned he was with being misunderstood, Wittgenstein didn’t treat the Tractatus as untouchable, and before long he began to reevaluate it himself, coming to the conclusion that some of it was simply wrong. At the end of the 1920s, he returned to Cambridge, where he discovered that his fame had spread further than just Vienna—many of England’s greatest minds actually met him at the train station, unwilling to wait to seek out his company later. He had never actually completed a degree at Cambridge, so he simply submitted the Tractatus, which was quickly accepted as sufficient grounds to grant him a doctorate. He began working as a professor at Cambridge’s Trinity College.

Wittgenstein returned to Norway later in the decade to write Philosophical Investigations; his goal was to correct Tractatus, and the new book took a less technical approach to philosophy.

In 1938, Adolf Hitler annexed Austria and Wittgenstein had become a German citizen. Since he was Jewish, his future in Germany (and soon-to-be occupied Europe) looked bleak. Lengthy negotiations and a great deal of money had the Wittgensteins—including several siblings who still lived in Austria and were subjected to the Nazis’ harsh race laws—reclassified as Mischlinge, a term used to describe mixed Aryan/Jews. It was one of only 12 such reclassifications allowed that year (1939), out of over 2,000 requests. Nearly two tons of gold—$50 million in today’s currency—was given to the Nazis in the negotiations.

In his intellectual life, Wittgenstein’s views of mathematics had changed completely. He no longer believed that mathematics represented anything real, but instead were just a way of dealing with particular symbols—and therefore a contradiction in a mathematical system was no reason to discard it. He left Cambridge when World War II broke out to work in hospitals, and officially resigned from Cambridge not long after the war’s conclusion, having never warmed up to the academic atmosphere. He died of prostate cancer a few years later, living most of the intervening time in the rural areas he preferred, while working on the unfinished Investigations.

Despite his difficult nature and social ineptness, Wittgenstein’s last words, according to his friend, American philosopher Norman Malcolm, were “Tell them I’ve had a wonderful life.”