MAIN MENU
Franz Kafka Literature
The dark, surrealist writings of Franz Kafka (1883 -1924) may not have attracted much attention during his lifetime, but today he is remembered as one of the most influential authors of the 20th century. The author of such famous works as The Metamorphosis and The Trial was a sickly and frequently miserable man whose stark… 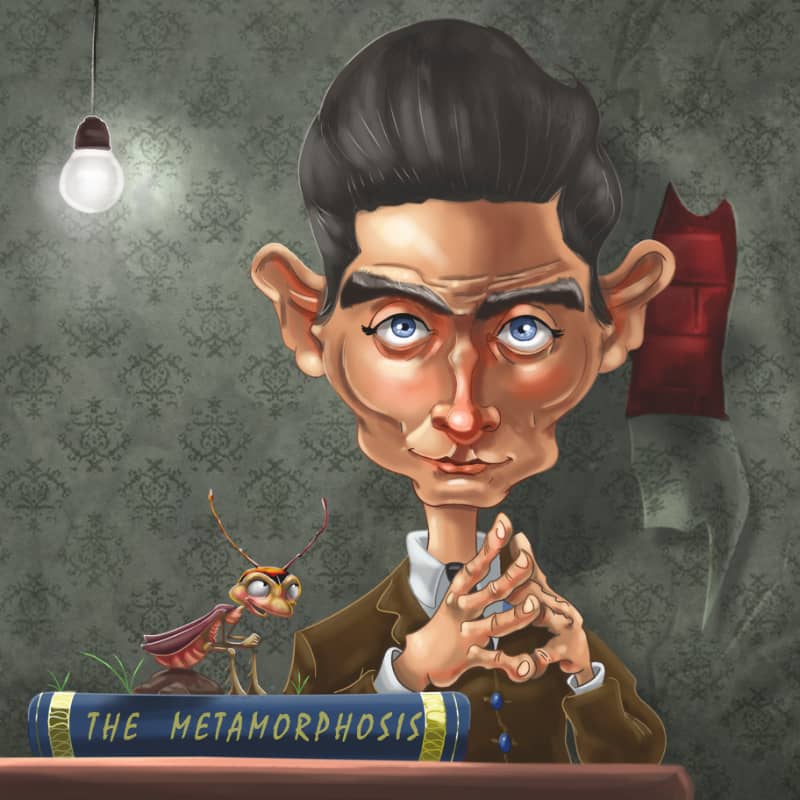 The dark, surrealist writings of Franz Kafka may not have attracted much attention during his lifetime, but today he is remembered as one of the most influential authors of the 20th century. The author of such famous works as The Metamorphosis and The Trial was a sickly and frequently miserable man whose stark personality is reflected in his bleak, somber works. Despite the brief length of his career, Kafka left behind a legacy of surrealist writing that stands alongside the works of Kurt Vonnegut and Pierre Naville as cornerstones of the 20th-century literary canon.

Kafka was born into a middle-class Jewish family in Prague, Bohemia, in what is now the Czech Republic; at the time, Prague was part of the Austro-Hungarian Empire. His father, Hermann Kafka, was an overbearing and oppressive man whose expectations Kafka tried and failed to meet throughout his life. As a Jewish family in early 20th-century Europe, the Kafkas faced the constant threat of discrimination. Hermann, however, was a self-made man who intentionally made the family learn German in order to integrate with the mainstream Prague society. As a result, Kafka spent his life attempting to reconcile his Jewish identity with the increasingly anti-Jewish sentiment growing around him.

As the oldest—and, after the deaths of his brothers in infancy, only—son, Kafka suffered the brunt of the pressure of his father’s expectations which combined with the strict rigors of his early education, had a profound impact on shaping his nervous, anxiety-ridden personality. As part of his father’s desire for social prominence, Kafka, and his younger sisters were educated in German schools. Franz was an astute student, and in 1902, he graduated from the Altstädter Gymnasium. He attended the Charles-Ferdinand University of Prague intending to study chemistry, only to switch to law after the first two weeks. It was while at Charles-Ferdinand that Kafka met his lifelong friend Max Brod, a fellow law student, and native of Prague.

After earning his law degree in 1906, Kafka entered the soul-crushing world of bureaucracy, taking various clerk positions before finding work with the Workers’ Accident Insurance Institute. Although he was a hard worker and got on well with his co-workers, Kafka often referred to the work as a “bread job” he took only to pay the bills. His personal life was plagued by the insecurities and anxieties instilled in him since childhood; although, by all accounts, he was regarded as pleasant and polite, he was terrified of being perceived as ugly and rude.

Writing had been Kafka’s escape since childhood, when he used to write short plays for his sisters to perform. He was highly critical of his work, however, and frequently destroyed it. Were it not for the encouragement of Brod, it can be assumed that Kafka’s literary talent would never have been revealed to the world. It was in 1908 that Kafka was published for the first time, submitting eight short stories to Hyperion; these stories would form the bulk of his “Meditations” collection. Tentatively, Kafka began to write more.

Kafka’s short stories, indicative of their time, depicted the loneliness of a man who saw himself as a mere cog in a vast, uncaring machine. His works drew attention for their bleak tone and stark outlook, particularly in regards to the same government bureaucracy that Kafka himself was immersed in daily. In 1912, after growing friction between Kafka and his father, he began to write his most famous work, the short story The Metamorphosis. In the story, Gregor Samsa awakens one morning to discover he has transformed into a giant bug, placing a tremendous burden on the family that must now care for him. Metamorphosis is an excellent symbol of the self-loathing and bitterness that Kafka was experiencing at the time.

The Metamorphosis was followed in 1914 by Kafka’s second-most famous work, The Trial, in which the central character is placed on trial without being told of his crime and shuffled between the uncaring offices of the law. Again we see Kafka railing against a dominating, unyielding higher force—the parallels to his father are not difficult to spot. Kafka’s father issues would finally hit their peak in 1919, then he wrote a Letter to his Father, a furious diatribe against Hermann’s emotional abuse. Kafka gave the letter to his mother, who never delivered it; Hermann never read its contents.

Two years earlier in 1917, Kafka began to suffer a debilitating malady: tuberculosis. He was cared for by his sister Ottla, and the parallels to his character Samsa’s situation must have unnerved him. Hoping to escape his family, he briefly moved to Berlin in 1923, but his worsening disease forced him to return to Prague for treatment.

Tuberculosis ravaged Kafka’s throat and made it impossible for him to swallow food; lacking any other method of feeding himself, he died of starvation at the age of 40 in 1924. Before his passing, he requested that Brod, as his editor, destroy the body of Kafka’s work. Unfortunately for Kafka, but, fortunately, for the world, Brod refused his friend’s wishes and instead chose to publish the rest of Kafka’s works after his death.