MAIN MENU
Biology Charles Darwin
British biologist Charles Darwin (1809–1882) laid the foundations of the theory of evolution and transformed the way we think about the natural world. Few books have influenced human thought more than his “On the Origin of Species.” Published in 1859, it expounded his theory of natural selection, shocking society and revolutionized science. 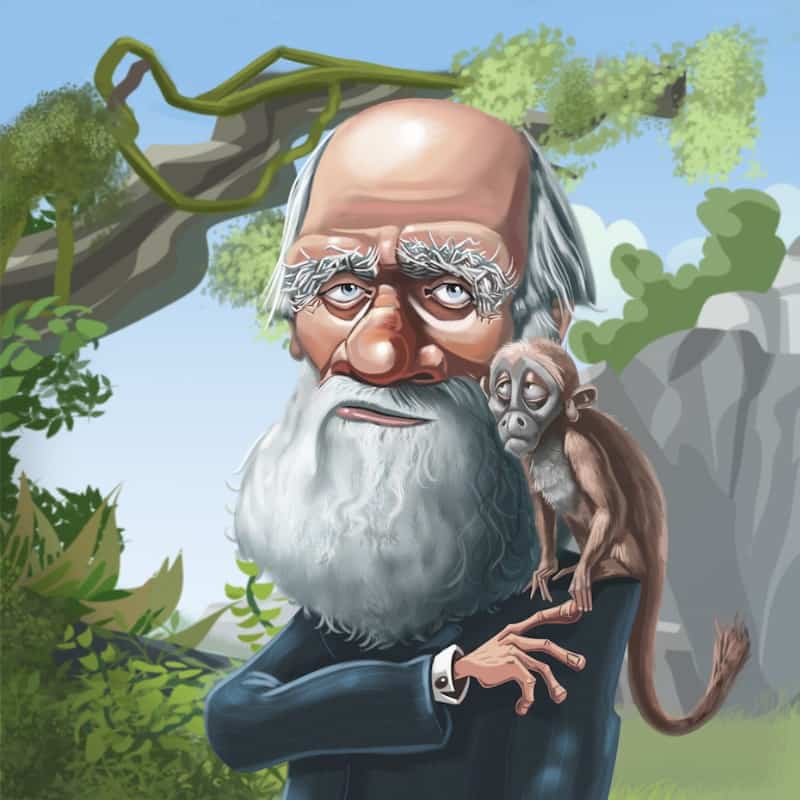 British naturalist and author. Pioneered the evolutionary theory and challenged the relationship between science and religion.

Charles Darwin was born in Shrewsbury, England, the son of a doctor and the grandson of Erasmus Darwin, a famous scientist (or “natural philosopher” as they were called at the time) whose work Zoonomia had concerned some of the early ideas of the developing theory of evolution. Zoonomia compared the gradual change of a species over generations in the development of a tadpole into a frog. On his mother’s side, Darwin was also the grandson of Josiah Wedgwood, a wealthy industrialist who had started the first ceramics factory (he’s the Wedgwood for which Wedgwood china is named).

The legacies of his two grandfathers converged in Charles. After his education, he apprenticed with his father and studied medicine, but didn’t have the stomach for the gruesomeness of life as a surgeon. While a medical student, he became interested in natural history, and Lamarck’s theory of evolution—in which acquired characteristics are passed on to offspring. Lamarckian evolution has been disproven—it was forwarded before the discovery of DNA and our current understanding of heredity—but provided a good starting point for discussions of evolution, in no small part because it was observable. Animals could be monitored to see if such acquired characteristics were, in fact, retained by their offspring. Charles began studying natural history and geology instead of medicine, to the dismay of his father, who saw no financial security in such a field—and probably feared that the young man would change his mind again. Dr. Darwin enrolled his son at Christ’s College in Cambridge, to prepare him for the Anglican clergy—and again Charles became distracted from his studies, neglecting them in favor of recreational activities and courses in natural history.

It was at Christ’s College that Darwin first encountered the idea of what would now be called “intelligent design”—the idea that theories of evolution were compatible with, and even evidence of, the idea of a Creator God. The ability of a species to adapt to its environment and to survive in harsh conditions—whether deep-sea animals or plant life that thrives in tumultuous climates—was thought to be evidence of a divine force shepherding its creations.

In any event, as Darwin pursued many of the same interests that his grandfather Erasmus had enjoyed, he was funded by Josiah Wedgwood’s money, much of which had been left to Dr Darwin when Wedgwood died years before Charles was born. Though the doctor despaired that his son might not ever settle on a productive career, he continued to let him find his own way, and that way led to Charles enlisting in an unpaid position—sort of like a modern-day unpaid internship—on the H.M.S. Beagle, which was embarking on a multi-year voyage to chart the South American coast.

JOURNEY ABOARD THE H.M.S. BEAGLE

The voyage took five years, during most of which time the ship docked at various ports as the coastline was surveyed and Darwin conducted his investigations of local geology and wildlife while collecting and cataloging specimens. His exposure to so many different species—both living and in the fossil record—so soon after his natural history education furthered his belief of many species being related, and as he noticed that closely-related species were nevertheless notably different from island to island, he theorized that the isolation was the cause of those differences: that species evolved, in other words, not only in response to different phenomena (so that members of the same species on two separate islands would, in time, diverge) but to some extent at random.

In time he began to formulate his own ideas to account for these phenomena, but he began his entrance into serious scientific society slowly — the first major paper he presented after the voyage of the Beagle was on the elevation of the South American continent, which he had observed when he found embedded seashells in the rock far above sea level, confirming earlier theories about the shifting of land masses. His return to England—and subsequent move to London—also involved him in the scientific and intellectual social circles of the 1830s, where the rationalism that had been espoused in the Enlightenment-inspired ideas as various as the ban of procreation among the poor (in order to combat famine and social ills) and new approaches to religion that eschewed superstition in favor of a concept of God that was compatible with science. While not devoutly religious or spiritual, Darwin was certainly no atheist—he saw no need to disavow the existence of God to further his theories or those of others.

In looking over his notes from the voyage and the information provided to him by other natural historians, he began to make private theories about the evolutionary trees of the species on the Galapagos islands and elsewhere, charting what seemed to be the relations between species which had evolved and diverged—he used the word “transmutation” for the process, which in its usage in alchemy had implied an active external force—upon their arrival on separate islands. He conducted most of his transmutation work in private—at least, without publishing it or presenting it—while interviewing all the experts, he could find on the relevant subfields, working for the Geological Society (a prestigious intellectual society based in London), and presenting papers in other areas of natural history. The workload drove him to exhaustion, and he suffered frequent health problems. Some believe that he may have suffered from severe stress at the thought of the implications of his ideas.

The theory of evolution did not originate with Darwin, it should be noted. The idea that one species would in time evolve to the point of becoming a separate species, and that this did not need to happen to all members of the species—accounting for the existence of both dogs and wolves, for instance, and the structural similarities between birds and dinosaur fossils (the idea of speciation, in short) had been bandied about for a long time. Darwin’s contributions were enormous and twofold: first, with the theory of natural selection which he developed over a couple of decades and finally published in The Origin Of Species (1859), he argued that the development of species occurs primarily because among the set of heritable traits, the ones that most aid an organism in surviving and procreating become more common with each generation. Eventually, such selection of traits—the survival of the fittest—can result in an entirely new species, as well as in organisms well-adapted to specific conditions.

The principle is fairly simple in theory: if having blue eyes makes a man more attractive to women, he has a better chance of having children, and if blue eyes can be inherited, then his children will have blue eyes. (In practice, not all traits are equally heritable, but the science of genetics did not yet exist—and indeed developed in large part because of Darwin’s discoveries.) Likewise, an animal that has thick fur is more likely to survive in the Arctic, and more likely to pass on its genes; an animal that can trick its predators is more likely to pass on those genes. Natural selection is one of those rare scientific ideas that is almost entirely understandable to the layman, as it confirms both the way we understand the world to work and our observations. (A common observation is that the number of people wearing glasses has been increasing as better lenses have been developed—because having poor eyesight is no longer a deficit, and plays no part in an individual’s survival or chances of procreation.)

The anonymously written Vestiges of the Natural History of Creation, a bestselling “popular science” book that dealt with extant theories of evolution among other topics, helped to convince Darwin to publish his notions. As he expected, they were received with controversy, though he was careful to avoid both the word evolution and any direct statement about the role of the human race. Though the Church of England condemned Darwin just as it had his fellows and predecessors, a group of theologians actually praised him as affirming the divine nature of the universe: representing a school of thought that mostly died off in the twentieth century as “evolutionism” and “creationism” came to be seen as antithetical enemies, these clergymen believed that superstition and belief in “miracles” were insults to God. God worked through laws, they argued, and any phenomenon that occurred could be explained by those laws—a “miracle” either simply hadn’t been explained yet or didn’t exist. Darwin’s treatment of the origin of species, then, better demonstrated that the world is essentially non-random: that dogs and wolves exist not because a random universe spat out random animals, but because each evolved for different reasons, different purposes. An evolutionary world is an orderly and purposeful world.

Darwin’s illnesses continued, and it is assumed at this point that stress was a large factor. In 1871, he published his next major work and his second major contribution to the theory of evolution: The Descent of Man addressed the role of evolutionary principles in the human species, rejecting the racist notion that different “races” of man were separate species (a popular idea among supporters of slavery and imperialism, who argued that blacks and American Indians were as different from “white humans” as sheep were from wolves), emphasizing the role of sex in natural selection (the more attractive you are to a potential partner, the better your chances of passing on your genes), and dealing extensively with what is now called evolutionary psychology: the role of evolution in the history and development of the human brain. He later wrote further on this latter topic, dealing with the evolutionary origin of human emotions.

It is only a slight overstatement to say that Darwin created a scientific subfield overnight. Psychology was in its early days in the 1870s—Sigmund Freud, the father of modern psychology, was still a teenager—which gave Darwin’s notions just enough time to circulate among the scientific community in order to help to seed modern psychology and provide more tools with which to study the human condition. Few scientists, then or since, have managed to contribute so significantly to both biology and psychology—Darwin not only did so, but provided the discoveries and principles that have become cornerstones of the modern pursuit of both fields.

He didn’t seek controversy out. He continued to work on topics of much less interest to the public, as the role of earthworms in soil formation and the mechanics of fertilization among pollinating plants. When he died in 1882, just over a decade after the publication of The Descent of Man, he was given a state funeral and buried near Isaac Newton. 126 years later, the Church of England offered an official apology to Darwin, stating: “The Church of England owes you an apology for misunderstanding you and, by getting our first reaction wrong, encouraging others to misunderstand you still.”