MAIN MENU
Alan Turing Logic Mathematics Philosophy
Considered one of the three most influential British scientists of all time (along with Newton and Darwin), Alan Turing was a mathematician who pioneered the fields of computer science and artificial intelligence, transforming society and helping to create the digital world we know today. 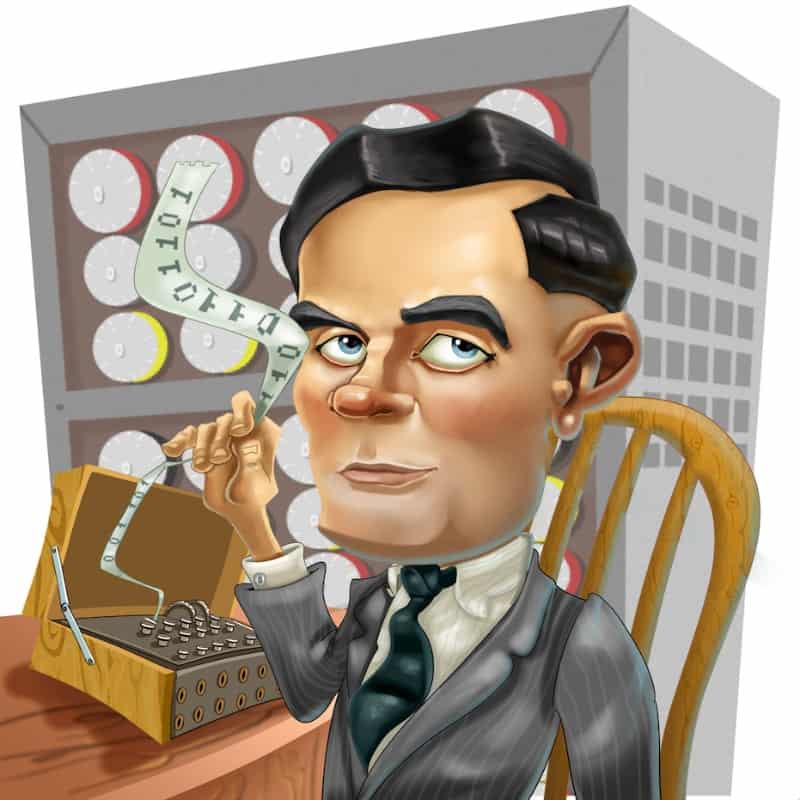 Considered one of the three most influential British scientists of all time (along with Newton and Darwin), Alan Turing was a mathematician who pioneered the fields of computer science and artificial intelligence, transforming society and helping to create the digital world we know today.

The fact that a computer had become a fixture in nearly every home is in large part due to Alan Turing’s groundbreaking work on artificial intelligence in the first half of the 20th century.

Born in London to upper-middle-class parents, Turing’s life was marked by professional achievements and personal hardships. His early interest in mathematics earned him derision from his teachers at Sherborne School, which focused more on classics than on science. Undeterred, Turing continued to show an exceptional (for a teenager) ability to solve advanced mathematical problems.

It was at Sherborne that Turing met his first love interest, an older student by the name of Christopher Morcom. During his lifetime, homosexuality was illegal in Britain, and this intolerant attitude eventually led to Turning’s death at 41, which is commonly believed to have been a suicide by cyanide poisoning.

Turing’s genius prospered from 1931 to 1934, the years he spent studying at King’s College, Cambridge University. There, he distinguished himself as a brilliant mathematician and was appointed, in 1935, a Fellow of the college.

Young Turing thrived at the progressive and intellectually stimulating university and eventually branched out into the new (to him) area of mathematical logic.

From September 1936 to July 1938, Turing studied for his Ph.D. at another renowned institution—albeit on the other side of the Atlantic. At the Institute for Advanced Study in Princeton NJ, he studied not only mathematics and logic, but also cryptology. This science of coding and decoding of secret messages would prove useful during WWII when Turing worked for the British government cracking the German “Enigma,” a machine used for the encryption of secret messages. One of his contributions was the creation of the Bombe, an electromechanical machine capable of breaking the Enigma messages on a huge scale.

Turing’s expertise in the decoding of enemy communications laid the groundwork for his post-war work at the National Physical Laboratory in London. While there, he created his revolutionary design for the Automatic Computing Engine (ACE), the first functional version of the Turing machine. He initially described this abstract device, intended to discover the nature and limits of computability, in his 1936 article, “On Computable Numbers, with an Application to the Entscheidungsproblem” (a process determining the validity of a first-order logic problem in a finite number of steps). This work is considered to be the foundation of computer science and our understanding of artificial intelligence.

The ACE project was bogged down by delays and red tape and Turing became disillusioned by the lack of progress. He moved back to Cambridge, where he focused on the concept of an electronic brain. However, the first ACE was built during his absence, executing its first program in 1950. Over the years, and with many modifications, the principles of the ACE design eventually spawned a personal computer that is today in nearly every home.

After the Cambridge sabbatical, Turing moved on to what would become the last job of his short life: the Computing Laboratory at Manchester University. While there, he worked on the development of the software programming for the Automatic Digital Machine (also called the MADM or the Manchester Mark I), the largest memory computer ever conceived.

It was during his stint in Manchester that Turing wrote his paper titled “Computing Machinery and Intelligence.” In it, he introduced his concept of the Turing Test, meant to determine whether a computer can demonstrate an intelligent behavior and “think” like a human brain. (The answer is still pending).

Although Turing’s work and achievements earned him the honorary title of Order of the British Empire (OBE), he was both persecuted and prosecuted for homosexuality.

In 1952, when it became known that he had a male lover 19 years his junior, Turing was arrested and brought to trial. He pled guilty to “indecent acts,” and instead of imprisonment, he agreed to undergo hormonal treatment to suppress his sex drive. As a result of estrogen injections, he started to grow breasts and suffered other physical and mental side effects as well.

On June 7, 1954, two years after his arrest and sentence, he committed suicide by eating an apple dipped in cyanide.

In 1999, Time Magazine named Turing one of the 100 Most Important People of the 20th Century—a fitting title for a brilliant pioneer whose extraordinary life was cut short by prejudice and bigotry.