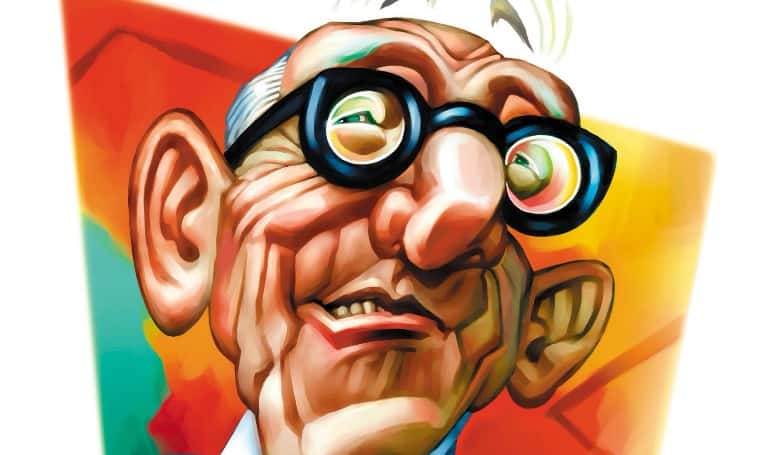 1. Designer and architect Charles-Édouard Jeanneret-Gris was born in Switzerland in 1887, but re-named himself Le Corbusier in the early 1920s, at a time when it was in vogue for creative folk to be known by one name. It was an homage to his grandfather, Lecorbésier.

2. Le Corbusier might have changed his name as a result of his starting a review called L’Esprit Nouveau with his friends, fellow artist Amédée Ozenfant and poet Paul Dermée. It was Ozenfant who started the Purism movement with Le Corbusier, which was meant to expand the artistic realm beyond Cubism and Dadaism.

3. After WWI, Le Corbusier took a job working with his architect cousin, Pierre Jeanneret. Though interested in architecture and design, he had chosen to spend the previous years perfecting his skills as a fine artist. When he finally broke out on his own, he became part of an architectural movement known as International Style.

4. After World War II, Le Corbusier helped re-build France—with style. “Unité d’habitation” (1952) was a housing project that was much more than utilitarian. Modeled after the Greek Parthenon, he thought of each room as an artistic endeavor and even brought his friend Pablo Picasso in to admire it.

5. “Dom-ino” was the name given to a new method of steel-point supports Le Corbusier introduced with his “Oeuvre complete” style of architecture, which allowed for more open spaces in his designs.

6. Not all of his architectural experiments were well received by his critics. In experimenting with glass curtain walls in a Salvation Army hostel in Paris (1933), one Vanity Fair critic remarked: “The south-facing glass façade turned the un-air-conditioned dormitory into an avant-garde toaster oven.”

7. Clearly, he wasn’t striving for perfection. One of his most famous sayings was: “Decoration always hides a mistake in construction.”

8. Despite Le Corbusier’s belief that a “house was a machine for living,” he made every effort to bring nature into the home to create a more humanistic effect.

9. Le Corbusier considered space, light, and order to be three essentials of life, having described them as “the things that men need just as much as they need bread or a place to sleep.” His desire to achieve the ultimate, orderly life was The Radiant City, designed to give its residents the most efficient living experience. This included, at Le Corbusier’s suggestion, the women staying in the home, and a daycare center where children could be raised by scientifically trained caretakers.

10. When he died in 1965, the trend was a shift away from Modernism, a movement Le Corbusier had worked so hard to support. With 60 buildings erected during his life and 76 books written about his work, some consider him the most influential architect of the modern movement.