MAIN MENU
Interview Paul Dirac Physics
An English theoretical physicist and co-recipient of the 1933 Nobel Prize for Physics, Paul Dirac (1902–1984) was a physicist whose work focused the mathematical and theoretical aspects of quantum mechanics. 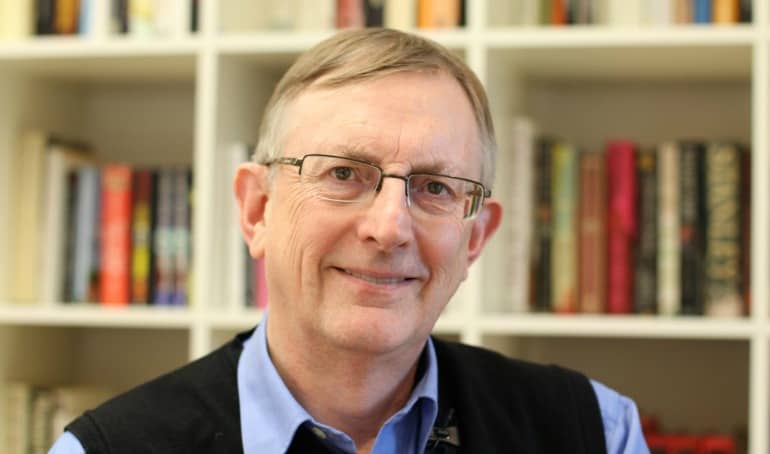 An English theoretical physicist and co-recipient of the 1933 Nobel Prize for Physics, Paul Dirac (1902–1984) was a physicist whose work focused on the mathematical and theoretical aspects of quantum mechanics.

Graham Farmelo is an award-winning science writer and biographer who specializes in physics and physicists.

Simply Charly: Your book on the life and work of physicist Paul Dirac has received wide critical acclaim. What was the genesis of this book? And why choose Dirac, who is all but unknown outside the world of physics?

Graham Farmelo: Dirac has been called “the Shakespeare of modern physics” and “the first truly modern theoretical physicist,” though he is little-known outside science. This seemed to be a good reason at least consider writing his life. During the research for the book, I came to see what a remarkable life he led—a boy from a modest home who later would conceive half the universe in his head. The story is full of great characters, including not only a gallery of superstar physicists but also his bullying father and his colorful wife Margit, who called him ‘my little Mickey Mouse.’

SC: Dirac came from an extremely dysfunctional family home that is widely cited as contributing to his crushingly shy and withdrawn demeanor. Can you elaborate?

GF: According to Dirac, he didn’t have a “normal” childhood. His family had almost no visitors, and he knew no parental affection. At mealtimes, he ate only with his father, who spoke to him only in French; at the same time, his mother ate with his siblings, speaking only English. Dirac claimed that he was so frightened to make a mistake when talking in French with his disciplinarian father that he (Paul) was driven into taciturnity.

SC: One of Dirac’s first important papers was for his reformulation of Werner Heisenberg’s new approach to understanding atoms. What was Dirac’s breakthrough in this paper?

GF: Heisenberg thought his approach involved a complete break from classical, Newtonian physics. Dirac disagreed, setting up the fundamental equations of quantum mechanics by analogy with classical physics, linking the two regimes through a generalization of a binary operation known as the Poisson Bracket.

SC: In 1933, Dirac shared the Nobel Prize in Physics with Erwin Schrödinger. For what work was he awarded the prize?

GF: According to the citation, Dirac was awarded the Prize for co-discovering quantum mechanics, but it is clear from the committee papers that his award was especially for his great prediction of the existence of the anti-electron. He made that prediction on purely theoretical grounds, with no help from experiment, which is why it is regarded as one of the greatest achievements of modern science. At the time he was awarded the Prize, Dirac was the youngest theoretician ever to have won the Nobel Prize in Physics.

SC: Nobel physicist Frank Wilczek has said that “of all the equations of physics, perhaps the most ‘magical’ is the Dirac Equation.” What is it about this equation that is so remarkable or “magical”?

GF: I love Frank Wilczek’s description of the Dirac equation as “achingly beautiful.” This equation, the first marriage of special relativity and simple quantum mechanics, describes the behavior of every electron that has ever existed so concisely that it can be written on the palm of your hand. It is now the only equation in Westminster Abbey, where Dirac is commemorated. The equation is enormously rich from a mathematical point of view and is still not fully understood, though it is used every day by fundamental physicists, including ones working on the Large Hadron Collider. Part of its beauty is that it explained why the spin and magnetism of the electron were inevitable consequences of relativity and quantum mechanics—before Dirac, no one understood why electrons had these properties. This is why he was hailed as a magician.

SC: Dirac was fond of saying that “It is more important to have beauty in one’s equations than to have them fit experiment.” Can you elaborate on how aesthetics guided Dirac’s research in theoretical physics over experimental data?

GF: From the mid-1930s onwards, Dirac believed that theoretical physicists working on fundamental physics should be guided by mathematical beauty rather than whether their theories agree with the latest experimental data. The principle of mathematical beauty became “almost a religion” to Dirac. It is clear when this began: it was when the American experimenter Robert Shankland argued persuasively in the mid-1930s that he had observed the breaking of energy conservation in sub-atomic processes. Dirac (and many others) were convinced and worked on that basis for months. Later, he felt desperately let down when it turned out that Shankland’s results were illusory.

SC: Dirac’s book The Principles of Quantum Mechanics has been hailed as a masterpiece. What is it about this book that has made it so enduring among students and practitioners of physics?

GF: This book, published in 1930, was immediately regarded as a masterpiece, the first authoritative summary of quantum mechanics to be written by a leading physicist. Dirac wrote it with little regard to history and offered little help to struggling readers—rather, it is like one long prose poem, setting out the theory with unique clarity and insight. It has never been out of print. Although most students find it hard to learn the theory from the book which contains no worked examples and very few references, the very best students appreciate its quality. Among those who saw merit in this work were physicists Richard Feynman, Julian Schwinger, and Sin-Itiro Tomonaga, who studied the book in the 1930s.

SC: For someone whose mind plumbed the deepest crevices of our universe, it’s ironic that Dirac would take great delight in Mickey Mouse and Cher. Can you tell us more about this facet of Dirac?

GF: When researching the book, I found that the standard image of Dirac as someone with no interests outside physics was wrong. He had many other interests but chose not to speak about them. His private correspondence, and many interviews with his family and friends, taught me that his interests included Mickey Mouse, Disney movies, the great Russian novelists of the 19th century (especially Leo Tolstoy), classical music (notably by Beethoven and Mozart), and James Bond films. Even I was surprised to learn that his favorite artist in the 1970s was the singer, Cher. When Dirac and his wife argued about whether to watch one of Cher’s TV specials, Dirac resolved the argument by purchasing a new TV so he could watch it on his own.

SC: You’ve speculated that Dirac displayed all the classic symptoms of autism which may have explained his terse and cripplingly shy behavior. Yet Freeman Dyson, in a review of your book for The New York Review of Books, takes issue with your view stating that Dirac “was intensely and personally involved with his physicist friends such as Pyotr Kapitza, Werner Heisenberg, and Niels Bohr. He had close friendships with at least three women before he married Margit. And he had normal fatherly relationships with his stepchildren and children. If Dirac was autistic, then the word ‘autism’ must have a different meaning.” What is your take on this?

GF: There is strong evidence that Dirac was autistic, though one cannot be sure as it is hard to psychoanalyze someone who is dead. My analysis is based on a direct comparison between his behavior and the internationally-agreed list of symptoms of autism. He fulfills every criterion except one: to be autistic, a person must have had the symptoms as a child, whereas one cannot say this with certainty for Dirac as there are no extant medical reports (only maternal reports of “such a quiet boy”). I respectfully disagree with the analysis of Freeman Dyson and others who point to instances of Dirac’s behavior that appear to contradict the usual perception of autism. This is, in my view, wrong as no single observation can contradict the diagnosis—there is a wide variety of behaviors on the autistic spectrum, so the only sensible way forward is to compare the diagnosticians’ criteria with observed behavior.

SC: Shortly after Dirac retired from Cambridge University in 1969, he was offered a post at Florida State University, which gave him another burst of energy and did wonders for his withdrawn personality. Can you tell us more about this?

GF: Dirac had a happy retirement at Florida State University. Although a quiet, reserved colleague, he felt comfortable working in the physics department and made many friends there. He would go to brown-bag lunches, listen to the conversation, sometimes contribute and even tell jokes (he was fond of risqué humor). In the evenings, he liked to watch PBS science programs, go to concerts, and read John le Carré novels. I was extremely fortunate to have the testimonies of many of Dirac’s closest friends, including the eccentric Leopold Halpern and the wonderfully observant Kurt Hofer, who shared with me the amazing encounter that begins my book—when Dirac, out of the blue, talks non-stop about the agony of his youth and his hatred of his father.