MAIN MENU
Interview Physics
Considered to be the most influential physicist of the 20th century, Albert Einstein (1879–1955) developed the theory of relativity and laid foundations for modern quantum mechanics. 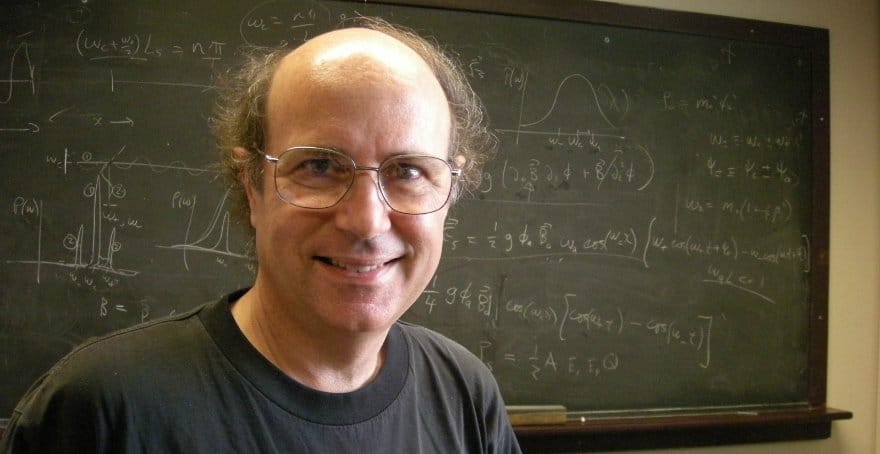 Herman Feshbach Professor of Physics at the Massachusetts Institute of Technology, Frank Wilczek is a theoretical physicist who won the 2004 Nobel Prize in Physics for a discovery in the world of quarks, the building blocks of the atomic nucleus. His latest book is A Beautiful Question: Finding Nature’s Deep Design.

Simply Charly: In 2004 you won the Nobel Prize for a discovery in the world of quarks, the building blocks of the atomic nucleus. Was this a concept known to Albert Einstein and, if so, what was his contribution to it?

Frank Wilczek: Einstein’s direct contribution to nuclear physics was basically zero. He spent the last thirty years of his life trying to find a “unified field theory,” but he seems to have hoped that gravitational and electromagnetic forces would supply all the clues he needed to build such a theory.

The strong force that holds together an atomic nucleus is the most powerful force in nature, but it was the last to be understood. The quark concept didn’t emerge until a few years after Einstein’s death. The breakthrough in my Nobel Prize work, which provided the basic equations governing quarks and predicted the properties of the gluons that connect them, came in 1973 (when I was 21-years-old). It established the theory known as quantum chromodynamics or QCD.

SC: Which of Einstein’s theories or works do you consider the most groundbreaking in relation to your own work?

FW: The concepts of special relativity, and especially the non-conservation of mass, really come into their own in QCD. Perhaps the most dramatic result is that we fulfill the promise of Einstein’s “second law” m = E/c2 (his first law being E = mc2). That is, we explain how most of the mass of matter arises from energy. The quarks inside protons and neutrons practically have zero mass, and the gluons have strictly zero mass. The mass of protons and neutrons, which is most of the mass of normal matter, arises almost entirely from the energy (motion) of what’s inside. Einstein would have enjoyed that, I think.

SC: Physicists today use very sophisticated instruments to study and measure the universe. What instruments, if any, did Einstein use in his work?

FW: The most sophisticated instrument we have: a human brain. Also a pencil, paper, and trash can. I’m sure that if computers had been available, Einstein would have used them to help with calculations.

SC: At the end of his life, Einstein became isolated from the scientific community. Why?

FW: Einstein went into a kind of self-imposed intellectual exile, starting long before the end of his life. In his early middle age he developed some very strong intuitions—or, you could say, prejudices—about the sorts of things he should work on, and the sort of approach he should take, that were out of touch with the way physics was developing. He hoped to achieve a comprehensive unified field theory, something like a “Theory of Everything” in today’s idiom, by building up from the classical field theories of gravity (i.e., general relativity) and electromagnetism. Einstein didn’t like the way quantum theory developed after 1925, and he didn’t pay much attention to nuclear physics, as I already mentioned. But precisely those subjects dominated research in fundamental physics in the decades following 1925, and there was spectacular progress in them. So basically Einstein continued doing 1924-style physics for thirty years after 1924, and the frontier passed him by.

SC: Why did Einstein loathe the implications of quantum mechanics?

FW: This question belongs to psychology more than physics. There was certainly no empirical reason for his distaste—on the contrary, quantum mechanics went from success to brilliant success. Einstein apparently just didn’t like the way probability enters into the laws of quantum theory, and he may have sensed difficulties in reconciling quantum theory with his baby, relativity. A normal scientific reaction would have been to respect the overwhelming success of what people were doing in quantum theory, assimilate that work, and try to tinker with it (maybe hoping to remove the probabilities) or build on it (to include relativity). In fact, we know that great results were there to be had along those directions, such as the Bell inequalities and the Dirac equation. But instead of trying to tinker or build, Einstein went into denial.

SC: It seems we reached a point where we can’t use theories to explain the physics, so instead we modify reality to fit the theory. Case in point: the current string theories and membrane theories that seem to fall apart if we don’t include particles and forms of energy which we have not yet been able to detect. To a layperson, it looks as if the prevailing attitude of modern physicists is that if a given theory doesn’t work, create a particle, dimension, or force that will. What is your take on this?

FW: There’s a glorious history of physicists introducing new entities for theoretical reasons, which only later are confirmed to be features of reality. New forms of “light”—radio, microwave, infrared, ultraviolet, x-rays, and y-rays—appeared in Maxwell’s equations long before they appeared in laboratories, homes, or hospitals. Similarly, antimatter first appeared in Dirac’s equation; neutrinos in Pauli’s imagination and Fermi’s equations; gluons in the equations of QCD; and I could cite many more examples. I hope—and expect!—that particles that appear in our equations for cosmic superconductivity (the so-called Higgs particles) and in our equations for supersymmetry will materialize at the Large Hadron Collider (LHC) within the next few years.

SC: A theory that Einstein spent the last 30 years of his life trying to find was the one that would unify electromagnetism with gravity. To this day, the search is still on for a unifying theory of gravitational force and the location of the graviton—a hypothetical elementary particle that transmits the force of gravity. Why is the search for the graviton so important, and how will the graviton unite the seemingly incompatible theories of general relativity and quantum mechanics?

In particular, it’s also easy to write down the equations for gravitons, the quanta of the gravitational field, using the same procedures we use to write down the equations for photons as the quanta of the electromagnetic field or gluons as the quanta of QCD fields. The theory of gravitons tells you what it takes to detect them, and it’s just very hard to do, as a practical matter. The same was once true for radio waves and neutrinos, which experimentalists eventually got a grip on, and unfortunately, it’s true for my beloved axions too. I actually think it would be more important and interesting to detect axions than gravitons, because there’s less certainty about them.

SC: Einstein once said: “I want to know God’s thoughts—the rest are mere details.” Yet, in a letter only recently made public, which he had written in 1954 to philosopher Eric Gutkind, Einstein said: “The word ‘God’ is for me nothing more than the expression and product of human weaknesses.” Is it possible for a physicist to reconcile science and religion?

FW: If what you understand by “God” is flexible enough, and what you mean by “reconcile” is loose enough, of course, it’s possible to reconcile God with physics. My own attitude is that the best, and really the only reliable information we have about “God” is the nature of the world She (or He or They or It) created—if you think about it that way at all.

SC: It was Einstein’s longtime wish to complete a “theory of everything,” (TOE), which would extend general relativity and unite the known forces in the universe. This idea still fascinates the brightest minds in physics, and some believe that string theory is the closest we have come to TOE. Assuming that the still-elusive TOE is the ultimate explanation of the universe at its most microscopic level and that physicists would one day discover it, where would physicists go from there?

FW: I very much dislike the phrase “Theory of Everything.” I’m not sure exactly what physicists who use that phrase mean by it, but it certainly isn’t the plain meaning of the words. For example, understanding how minds work is obviously a very important part of understanding Everything, and I don’t believe extending general relativity or uniting the forces will help with that problem at all. So physicists who talk about a “Theory of Everything” are talking in a deliberately misleading way whose arrogance rightly offends many people, and I wish they would stop it.

A much better phrase is the one Steven Weinberg uses, “Final Theory.” At least, it’s pretty clear what that means. It’s possible that at some point theoretical physicists will reach a consensus that they’ve got equations for basic physical processes that are both correct and as complete as scientific investigation will ever achieve. That would mean the end of a certain kind of physics, namely the kind that seeks new equations for basic processes. I don’t think we’re at that point yet, by a long shot. There are many reasons we should be looking for better equations, a few of which I’ve touched on above.

In any case, even if physicists achieved a final theory in Weinberg’s sense, most of science, including most of physics, would continue to thrive, little if at all affected. The problem of understanding minds would still be there, the problems of understanding particular materials and particular astrophysical objects, the problems of designing better ways to capture and store energy, of building quantum computers, and many, many, many others.

SC: What projects are you working on currently?

FW: I’ve recently put out papers on some cosmological consequences of axions that might be observed; on some qualitatively new kinds of particles (tetraquarks) whose existence I think QCD suggests; and on some new possibilities for the basic properties of excitations in matter at low temperature (“anyon” quantum statistics). I’m continuing to work hard on that third subject, partly because it might be important for making quantum computers, but to be honest mostly because it’s interesting mathematically and gives scope for creativity. Because I’ve been traveling, giving a lot of lectures, and writing a popular book recently—winning a Nobel Prize is very disruptive!—I’ve developed a backlog of new ideas that I haven’t had time to convince myself are worthless, so I’m working on that list.

I’m also writing a mystery novel, which involves physics, but I’m not going to give away the story here.