The Cambridge Introduction to Shakespeare 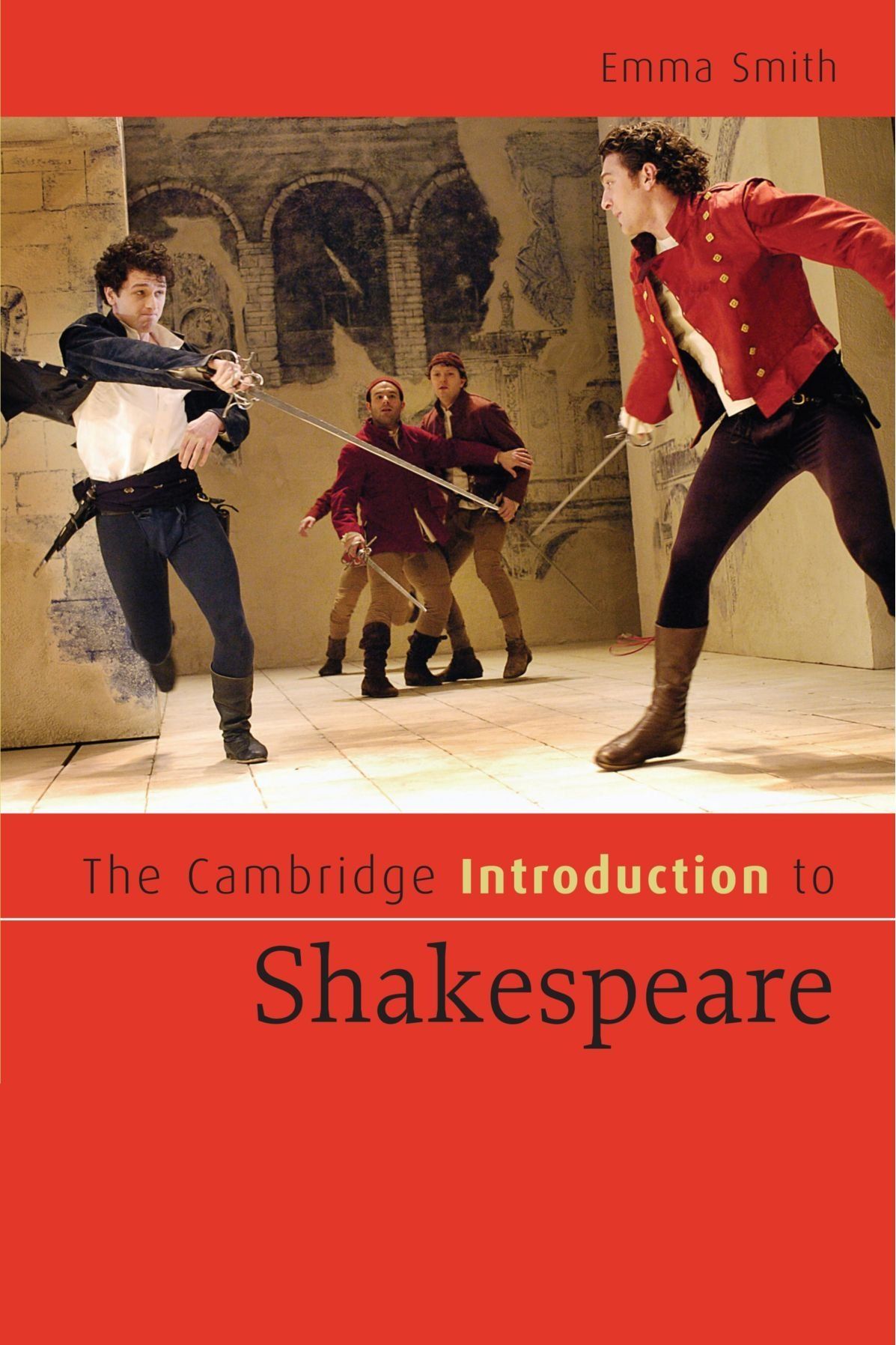 The Cambridge Introduction to Shakespeare

The Cambridge Introduction to Shakespeare by Emma Smith

Studying Shakespeare: A Guide to the Plays by Laurie E. Maguire

When climbing a mountain, it’s best to have a sherpa to aid your ascent, serving as a guide, helping you focus on the breathtaking views, and avoiding getting lost along the way. The landscape of Shakespeare’s works has attracted countless guides, many of them just as invaluable as their mountain-scaling brethren. Listed below are four such guides, each offering a vista that makes the experience of Shakespeare richer than a solo journey is likely to be.

Shakespeare, by Gabriel Egan, part of the Edinburgh Critical Guides series, opts for selectivity rather than comprehensiveness, focusing on a handful of the Bard’s plays. Egan, professor of Shakespeare Studies and Director of the Centre for Textual Studies at DeMontfort University (UK), is a prolific and highly respected critic of the period, and his knowledge of the context of Shakespeare’s plays is impressively displayed throughout the book, which has separate chapters on the comedies, histories, tragedies, and the problem plays and romances. General readers will get the most from the wide-ranging introduction, with an especially good discussion of how theater companies formed during the Elizabethan era (Shakespeare was, after all, a businessman, and this discussion of the business side of theater is a good counter-balance to the iconic “poetic genius” that we’ve been bequeathed.)

In the discussion of individual plays, however, the reader should be prepared to deal with some thoughtful-but-academically-inflected prose. References abound to “transformative quasi-theatrical events” and “the contradictory conditions of nascent bourgeois ideological practice within a framework of political repression.” As an example:

In the long term, an unhealthy society cannot survive, as Marxist critic Terry Eagleton quoted Freud observing: “A civilization which leaves so large a number of its participants unsatisfied and drives them to revolt neither has nor deserves the prospect of a lasting existence.” It is important to realize that we are here still in the conceptual domain mapped out by Plato.”

Marx, Eagleton, Freud, and Plato all have important things to say, of course, but sometimes it can seem like Shakespeare himself is getting shouldered out of the discussion. Still, for those already conversant with the critical contours of the plays under consideration, the book offers a valuable excavation through the bedrock layers of some of Shakespeare’s work.

Sometimes a fly-over can yield as valuable a perspective as a close-up inspection. Such is the comprehensive approach of Emma Smith’s The Cambridge Introduction to Shakespeare, a book that “does not assume any prior knowledge. Instead, it develops ways of thinking and provides the reader with resources for independent research.” The Cambridge Introductions are always useful, and Smith’s contribution to the series represents a perfect match between subject and author.  A Fellow and Tutor in English at Hertford College, University of Oxford, Smith is an eminent Elizabethan scholar (her lectures on Shakespeare have even been released as a podcast). She knows how to break down complex ideas into clear and helpful language. The seven chapters of the book cover most of the essentials (though a bit more biography and history of the period might be useful to the Shakespeare newbie). But, as Smith notes in her introduction, the book “engages less with facts than with critical approaches to Shakespeare.”

The opening chapter focuses on what for many readers is Shakespeare’s prime legacy: his characters. Hamlet, Juliet, Lady Macbeth, Falstaff—these and dozens of others are what many readers of the plays most remember. And their qualities have become a sort of shorthand for modern pop-psychologizing: we know what it means to label someone an “Iago” (opportunistic, scheming, treacherous) or a “Romeo” (romantic, impulsive, idealistic). Smith notes “The first appreciations of Shakespeare tended to praise his characterization above all other aspects of his work.” But she also explores the modern propensity to see Shakespeare’s characters as real people, reminding us that “Shakespearean characters are writing first, people second.” Her insights into character are always helpful, and often quite pithy, as when she discusses how the works are seen by some as poetry rather than scripts to be performed: “Poems don’t tend to come over very well on the stage; people do.”

She offers a very detailed discussion of the sometimes-chewy subject of the transmission of the texts through various editors and editions, and how the plays finally made it into the printed versions we have today (and why these versions differ—often markedly—from one another). Her deep consideration of the textual questions that surround the Shakespearean canon is so informed that one can’t but be a little disappointed that she never even mentions the authorship controversy—the quarrelsome but persistent debate that some scholars still regard with seriousness.

Throughout the book, Smith’s lucidity never desserts her, even in the somewhat technical issue of how the five-act plays are structured, and what elements comprise a comedy, or a tragedy, or the subdivisions of those categories into “problem plays.” Smith states simply: “If things end up better than when you started out, at least for the central character, the world is a comic one; it’s a tragedy where they are getting worse.”

Any author confident enough to start a discussion of Shakespeare by bringing up the O.J. Simpson trial probably deserves a reader’s ear. Such is the case with Laurie E. Maguire’s Studying Shakespeare: A Guide to the Plays. The book reads like a series of really engaging lectures on the plays, a kind of Shakespeare 101, aimed at an audience of undergraduates (or those who wish they had paid more attention as undergraduates). Maguire, professor of English at Magdalen College, Oxford, deserves great credit for connecting the dots between Shakespeare and the modern reader. She doesn’t stint on historical discussions of the period—she knows the terrain very well—but she is good at analogies that make the past come alive in the present. Not for her the lamentable trend in some quarters of academia to relegate Shakespeare to the dust bin of Western Culture. In fact, she finds the Bard more necessary than ever—and not just in the classroom:

This book is also a defense of Shakespeare’s relevance in a century in which his place in the curriculum is increasingly challenged, and so, by extension, a defense of the relevance of literature to our lives today. In a recent survey of 700 senior business leaders, 55 percent chose fiction or poetry rather than a book on business or management as the work that most influenced their career.

The book is comprised of chapters bunched under some useful themes, such as “Private Life: Shakespeare and Selfhood,” “Marital Life: Shakespeare and Romance,” and “Real Life: Shakespeare and Suffering.” Every heading comprises individual chapters on the plays, each tied in some way to the theme under consideration. Elements that would be potentially lost by limiting individual plays as representative of certain themes are more than offset by the careful discussion of each work as an example of some enduring component of the human enterprise, often distilled in simple yet profound utterances, as when she addresses the idea of mourning in Hamlet: “Life has 100% mortality. This is the message Claudius gives Hamlet at their first meeting in the play.”

David Bevington, editor of one of the most widely used and reader-friendly editions of Shakespeare (the single-volume Longman edition, usually referred to by academics simply as “The Bevington”) has amassed a small mountain of work on the towering Shakespeare. His book, Shakespeare’s Ideas: More Things in Heaven and Earth, reads more like a reflective fireside chat after a mountain climb rather than a Baedeker guide to the terrain.

Bevington adopts an almost avuncular tone, his book reflecting “a lifetime of reading and teaching and intellectual conversation.” His insights are so deeply informed yet so congenially dispatched that one senses the lifelong learning and thinking processes that went into their formation. Professor Emeritus in the Humanities and in English Language and Literature at the University of Chicago, Bevington explores in this work the idea of Shakespeare as a great thinker, regardless of whether he was “learned or not” in philosophy, for “the plays and poems are full of ideas.”

And the range of ideas he considers reveals a myriad-mindedness worthy of his subject, ranging from religion and politics to sex and gender, and even acting. (“What does it mean to say that acting is an imitation? … What styles of acting can best achieve theatre’s function of holding the mirror up to nature? These things seem to matter greatly to Shakespeare.”)

Though the book will certainly be of interest to readers who (to borrow a phrase from the First Folio), the most able to him that can but spell, those with a long-simmering acquaintance with the Bard will likely find the work most illuminating, as it deals with some famous—and long-standing—issues that have been dissected by readers and critics of the plays for four centuries. But one will also find some unexpected critical epiphanies along the way, as in this final chapter dealing with the idea of closure in Shakespeare:

It is as though Shakespeare works his way through a dialectic of thesis and antithesis toward synthesis. In an artistically self-aware gesture, he seems interested in how a play ends and how a writer’s career should end. Shakespeare seems to be summing up what it means to be a person, a man, a husband and father, a writer, a dramatist.

In other words, a grand summing up by a master—which could also be said of Bevington’s book.