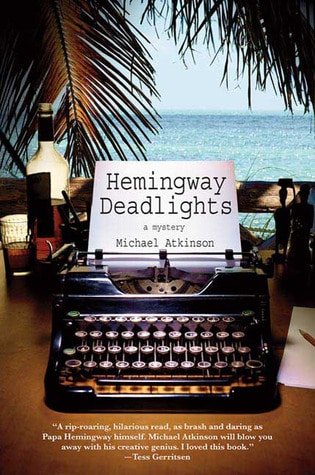 A legend in his own lifetime, Ernest Hemingway, better known to many as ‘Papa’ Hemingway, was without a doubt one of the most influential writers of the 20th Century. His simple, clear, distinctive style, devoid of flowery prose and lengthy descriptions filled with adverbs and adjectives, revolutionized writing in a time when writers were still influenced by the rich, elaborate Victorian-era prose. His dialog was razor-sharp, crisp and laconic. If the term “show, don’t tell” didn’t start with Hemingway, it might as well have been. To evoke feelings in the reader, Hemingway relied on action and strong, precise verbs. The result was a style that was minimalistic yet forceful.

It’s important to understand Hemingway’s style if one is to appreciate Michael Atkinson’s novel, Hemingway Deadlights, the first book in this author’s hard-boiled Hemingway mystery series.

Hemingway Deadlights is set in 1956. The war is over, and Hemingway is living in Key West. Though he enjoys his popularity and celebrity status—as Hemingway himself did in real life—he’s struggling with writer’s block and his addiction to alcohol. He’s already won the Nobel Prize for The Old Man and the Sea and is on his fourth marriage. Mary, his current wife, is waiting for him in La Havana, where civil unrest has already begun under U.S.-backed Cuban dictator Fulgencio Batiste’s corrupt regime.

As the story starts, Hemingway is nursing a broken ankle and a hangover when he learns that one of his drinking buddies, an artist and smuggler by the name of Peter Cuthbert, has been skewered through the chest with an antique whaling harpoon. Since Cuthbert is a nobody, the Key West police don’t take much interest in him and opt to neglect the case. Hemingway, with his lofty justice ideals, decides to do something about it by investigating the murder himself. Taking advantage of the fact that he’s a popular celebrity, he begins asking questions and sticking his nose where it doesn’t belong. During the process, he meets with various undesirable and suspicious individuals, including FBI and CIA agents, the Mafia, and even Fidel Castro and Che Guevara.

The novel has various positive aspects. First of all, Atkinson does an excellent job of portraying Hemingway as an arrogant, overbearing, dirty-mouthed, double-fisted, macho kind of guy with—surprisingly—a lovable side. Perhaps it’s his search for justice when nobody else seems to care, or his high regard for literature and true, honest writing. Also, the story has a keen sense of setting. The author brings to life the location with his succinct description of the heat, the sea, the palm trees, the sun, the breeze and, of course, the tropical drinks, transporting the reader to another place and time filled with sensory detail. The dialog is blunt and crisp and in harmony with the real Hemingway style:

Lynch stumbled to his feet, weeping. “You fuck,” he sputtered. His words came out now like sounds out of a horn stuffed with gravel. “Yeah. Did I break much?” “I don’t know, never had my jaw broken. What’s it like?” “Hurts,” Bolitho. “Like sonofabitch,” Hemingway offered. “But you’re talking, so.” Lynch seemed okay and was checking for loose teeth.

Another interesting facet of this book is that the author offers many bits of information about what Hemingway was really like, such as the fact that he respected Nabokov, Flaubert, and Chekhov, but was contemptuous of Faulkner, and drank Pernod by the case.

As a mystery, however, Hemingway Deadlights leaves a lot to be desired. The plot is convoluted at times, with Hemingway interrogating one character or another without much vital information being added to move the story along in each scene. In this sense, the storyline lacks clarity, making it difficult for the reader to follow the mystery. This is heightened by the fact that there are many characters in the novel. The story feels linear and lacks the rising action that adds suspense and is necessary for a mystery. What does carry the novel forward are Hemingway’s strong voice and personality, and not the plot.

On another note, there’s a lot of cursing and foul language in the book. This isn’t necessarily good or bad, but readers who are easily offended should be aware of it. Hemingway Deadlights is a novel that will be of particular interest to Hemingway fans. It is a challenge to write a book with a historical figure as a protagonist, especially if that figure happens to be a writer with a strong individual style. The merit of this work lies in the honest way Atkinson portrays one of the most influential writers of our time.