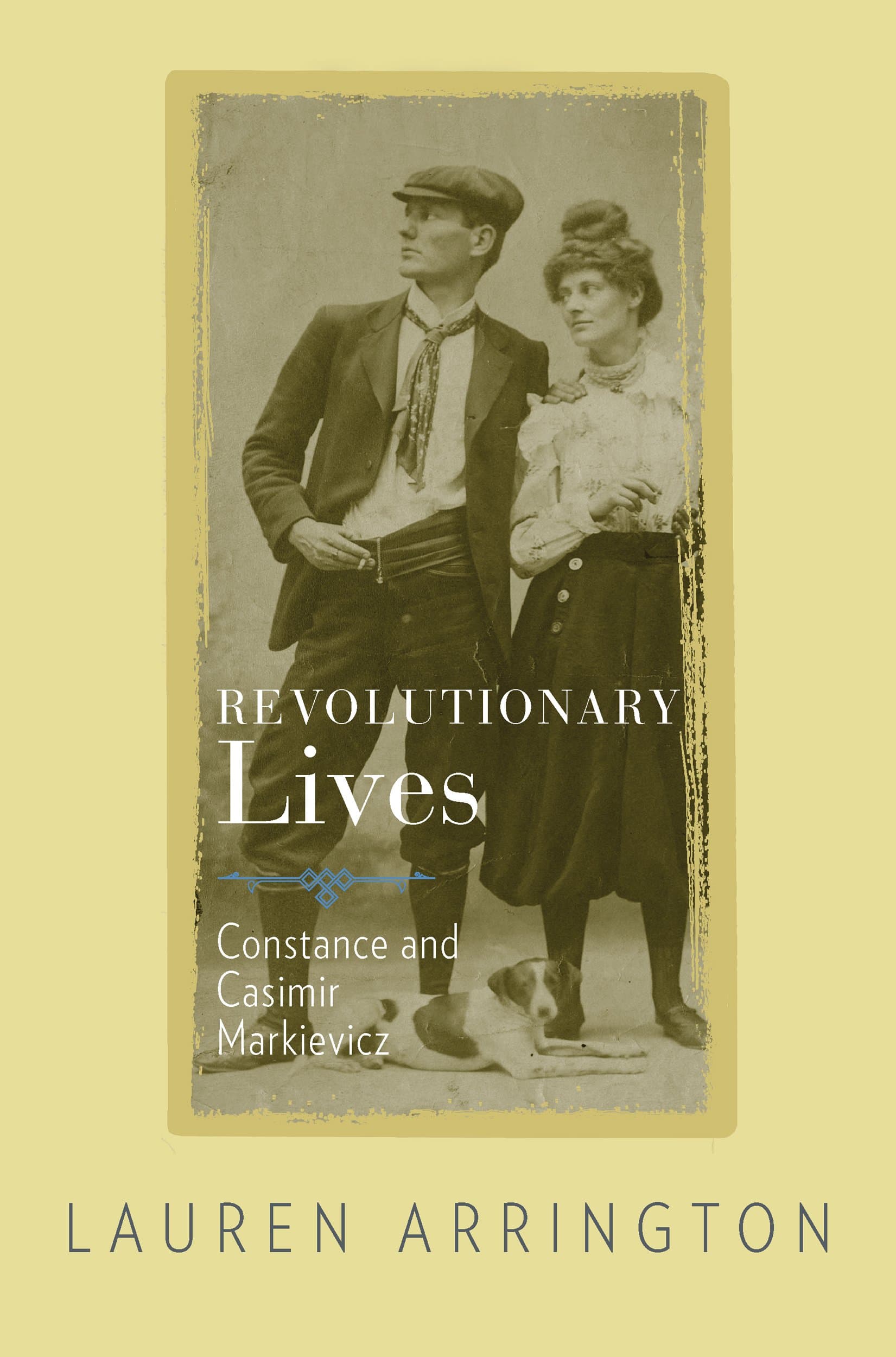 On the final page of her book, author Lauren Arrington, a senior lecturer at the Institute of Irish Studies, University of Liverpool, quotes poet Louise Bogan referring to Ireland: “It’s not a country it’s a neurosis” 276. For many people, this sentiment is an accurate, if poetic rendering of the romantic Irish soul. Revolutionary Lives chronicles the exploits of a young Irish aristocrat named Constance and her husband Casimir Markievicz, a Polish artist. Constance came of age in the hopeful era that marked the turn from the 19th to the 20th century. Her world was a world of privilege where she attended parties and rubbed elbows with the glitterati of the European art communities. Arrington convincingly describes Constance as a somewhat conflicted combination of sheltered debutante and bohemian free spirit. Her move to London to study art and live off the largesse of her family is pivotal. In the teeming British capital, Constance came face to face with the intractable issues of her day: the imperfection of capitalism and the dilemma of imperial rule. The poverty she saw in London caused her to embrace socialism as a solution to the excesses of laissez-faire.

Constance found herself in a world where literary commentary, radical political theories, and social movements simmered together in a heady brew. In her twenties, her worldview was increasingly defined by two ideas: Bolshevism or Socialism and an Ireland free of British rule. Constance was also active in the women’s suffragist movement, but in Ireland, this was increasingly a plank of the free Ireland platform that consumed her life. Her conviction that a free Ireland trumped all other struggles is evidenced by her commitment to building boy and girl scout clubs. As Arrington makes clear, these were groups explicitly formed to prepare kids to be recruits, even soldiers for the cause. They combined educational programs and physical culture and drilling in a way that can’t help but remind people of similar later efforts by Fascist Germany and Soviet Russia.

Over several decades, Constance wrote numerous editorials and articles arguing her ideas forcefully in sympathetic Irish newspapers. Arrington includes several at length; one of them included the phrase “…exterminating the police” 75. This is a sentiment that resonates in the so-called Black Lives Matter movement in our own time. This was not hyperbole or bravado, as subsequent events would show. The best example Arrington provides is the Easter Rising of 1916 in which the agitators declared a free republic, occupied Dublin’s city hall and so became revolutionaries or outlaws depending on your point of view. The rebellion was quickly put down, and Constance and other ringleaders were put on trial. Some were executed and others, including Constance, served time in prison before being granted amnesty. Although the short rebellion failed, Constance became folk heroes in the tradition of Irish heroes before her. Arrington describes how Constance continued to agitate for Irish independence from British rule as well as for socialism to replace capitalism—twin evils in her eyes that were inextricably linked. To these ends, she became Secretary of Labor, but was disappointed she was not able to effect real change.

A turning point for Constance and for Ireland came in 1921 with the signing of the Anglo-Irish Treaty, which granted Ireland Dominion status. This was seen as a great victory in many circles, but for idealistic revolutionaries like Constance, it was the definition of surrender. Arrington describes how shortly after the treaty was signed Constance toured the United States, where many greeted her as a genuine hero. The trip proved only to be a reprieve from her struggles back in Ireland. Political alliances shifted as various groups pursued their own agendas and their own survival. Even Sinn Fein, a group she’d had intimate ties with for years, parted ways. Arrington summarized Constance’s state of mind this way: “Markiewicz was not only bitter toward her former Sinn Fein colleagues who she believed had betrayed the Republic” 248. Disillusionment and cynicism seem to have informed her later years in a way she probably could not have conceived of as a young art student in London.

The romance of revolution had faded with the loss of friends, time in prison, and realities of political compromise. Arrington gives the impression that Constance was always caught between two worlds: the privileged family and her idealism and political activism with artists and revolutionary friends. As she grew older, she never lost her passion for a free Ireland, but she did begin to alter her view of what kind of country it should be. The utopianism of her youth had turned in a more pragmatic direction after years of bumping up against harsh realities.

Readers interested in Irish history in general and the late 19th and early 20th-century political upheaval, in particular, will certainly appreciate Arrington’s research efforts and attention to detail. More casual readers will get a vivid picture of the period, even if the alphabet soup of political organizations can start to blur after a while. Arrington mentions that the fact that Constance being a female somewhat impeded her research efforts. She describes a situation in which many British archives from the period gave short shrift to females compared to their male counterparts. Arrington’s perseverance is rewarded with a comprehensive but manageable history of an important era in Irish and European history. She captures, in equal parts, the romance and the disillusionment felt by Constance and her fellow Irishmen who risked so much in their struggle for freedom for their beloved country. The human drama on display in the book will appeal to many readers, even if they aren’t normally interested in Irish history.