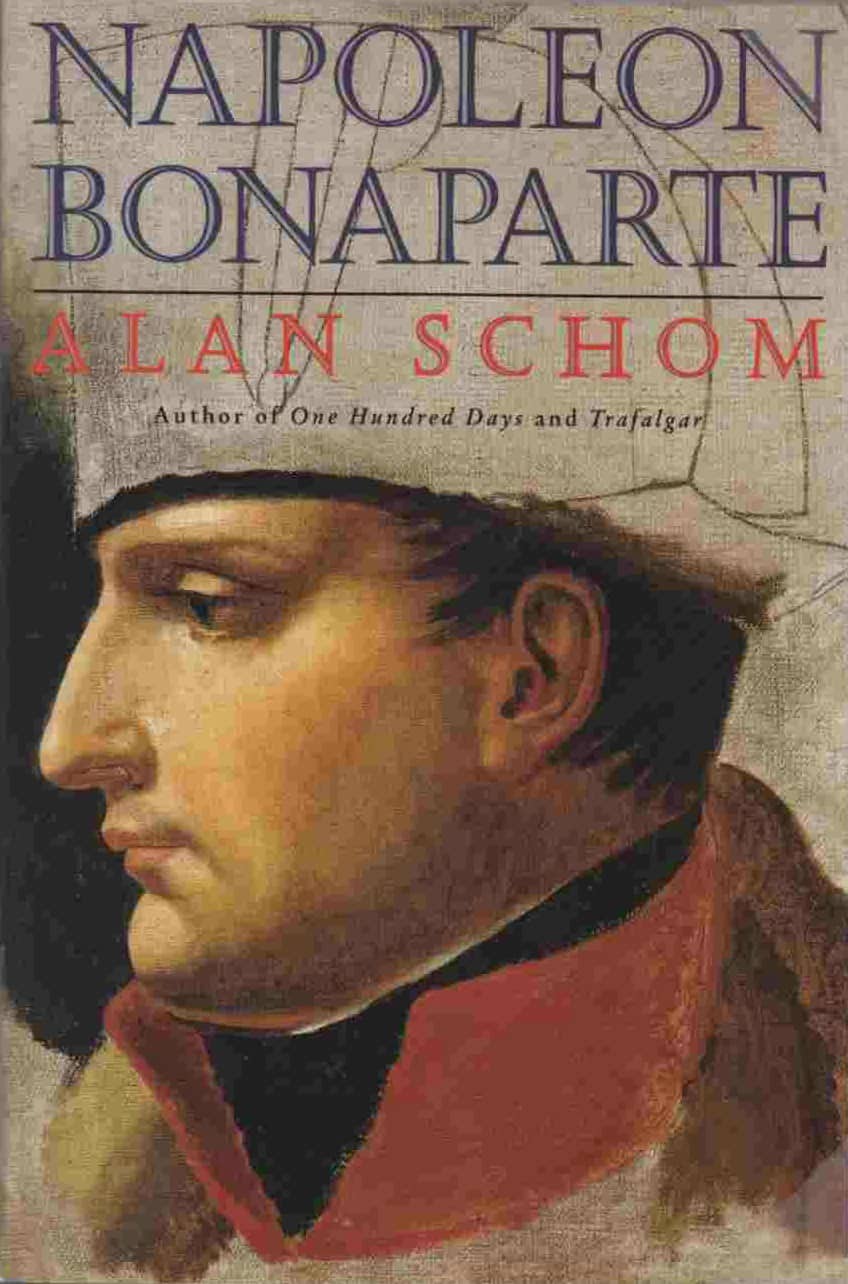 Alan Schom, former professor of French and European history at the University of California, Riverside, and Southern Connecticut State University, has written a monumental and richly detailed biography of the life of Napoleon Bonaparte. Despite a plethora of books on the great man, describing his many exploits and the myths of his effect on Europe during his reign from 1795-1815, few have used research more effectively than Professor Schom.

To understand what Napoleon was to France and Europe after the “defeat” of the French Revolution, one has to put aside the myth and focus on the reality. To do so, Schom has treated Napoleon as a man, and not just a Consul and Emperor.

Napoleon “Buonaparte” was born a Corsican and had more in common with Italian than French mannerisms. Short in stature, he made up for it with a personality described by Schom as megalomaniacal and possibly schizophrenic. He was beset throughout his life with epileptic fits, some of lengthy duration, which he tried unsuccessfully to keep hidden from his ministers, especially Talleyrand and Fouche.

Bonaparte had seized on the rescue of Toulon in 1794 to make a name for himself in the end days of the Terror and Robespierre. He again appeared at the head of the ragged and poorly supported Army of Italy and led incredible victories. Swept away by the impulses of the Directory, he led a badly equipped Army to Egypt for three years of restive, mostly unsuccessful efforts of conquest. Escaping, he came to Paris for 18 Brumaire and the “coup” that made him First Consul, and then, after defeating the Austrians and Germans, Emperor of France (with Josephine as Empress).

However, Schom shows Napoleon to be a vain and even ineffective judge of character and a poor financier. He repeatedly replaced ministers and marshals, while bankrupting the Treasury with his incessant campaigns against British, Austrian, German, and Russian coalitions. Within his own family, he and his brothers and sisters fought endless battles of power over thrones and wealth and authority.

He is also seen as far from the legendary commander and administrator portrayed by more friendly historical tracts. For example, in 1803 he managed to sign the Peace of Amiens to end war versus Britain, but after a number of years of fighting in Germany and Italy, refused Minister Charles Fox’s efforts at general European peace in 1806, even after three unsuccessful years of building up massive fortification on the French coast to invade Britain. Instead, he created the Confederation of the Rhine and the Continental System, while being unable to enforce blockades against British trade on the continent because of the failure of his navy and such devastating defeats as Nelson at Trafalgar in 1805.

These were crucial times, as Napoleon with his incessant wars and breaking of treaties and armistices versus allies and opponents alike, bankrupted France and caused the Bourse to fold more than once. He also had the abysmal habit of defrauding all around him—bankers, ministers, and especially “allies” of “occupied” countries like Holland, Belgium, Germany, and Italy. All this while building up the Tuilleries to almost royalist splendor equal to Louis XIV and enriching his family with plunder and estates beyond mention.

Thus, long before his final denouement at Leipzig in 1813, his unsuccessful defense of France in 1814, and the inglorious “Hundred Days” of 1815 ending in Waterloo, Napoleon neglected to supply his country and his empire with the proper administration and material to warrant goodwill. This is shown through a series of vignettes, starting with the Christmas Eve assassination plot through the more serious efforts of famous generals and marshals to overthrow the Emperor while he was fighting in Germany and Spain (1810) and even when he was in Moscow (1812).

Schom does, however, make clear where Napoleon went wrong after his coronation in 1804. He had the opportunity to make a real ally of Russia in 1807 at the Peace of Tilsit, but failed to treat Czar Alexander with respect at Erfurt (1808). Later, he believed he could control the British not by invasion but by defeating armies in Spain and Portugal, however instead wound up bleeding a large portion of the Grand Armee there in 1807-1812. Despite these warning signs, he invaded Russia in 1812 with an enormous conscripted army, taking Moscow, only to find the Russians burning it down around him, forcing the disastrous “death march” back to Paris. Still, he rejected peace in 1814, after Leipzig; that would have left France at least intact. He had dismissed Talleyrand and Fouche numerous times. He had “annulled” his marriage to Josephine over her inability to produce a male heir, marrying a young Marie Louise, who produced an heir, ‘Prince of Rome.’

Napoleon thought nothing of exhausting France’s manpower, eventually drawing younger and younger men in “levee en masse.” He dreamed of invading Britain with no control of the coast or naval superiority. He dreamed of forcing Russia to concede Constantinople and Poland to him without a fight as an ally. Going further, even after Egypt’s defeat, he dreamed of driving through Spain and Portugal to Gibraltar, then on to India and the West Indies, to control the world as one of his idols, Alexander the Great, failed to do.

Schom shows overall that while Napoleon at times was a brilliant tactician and most certainly a successful gambler, his sense of reality began to leave him as Emperor as his trust in men and mankind deteriorated. He has written a brilliant saga, of many years effort that is distinguished by the singular fact he sees Napoleon, the man throughout, with his strengths and weaknesses readily apparent. The book is highly recommended for students of France from the Revolution and military historians alike.