Mad at the World: A Life of John Steinbeck 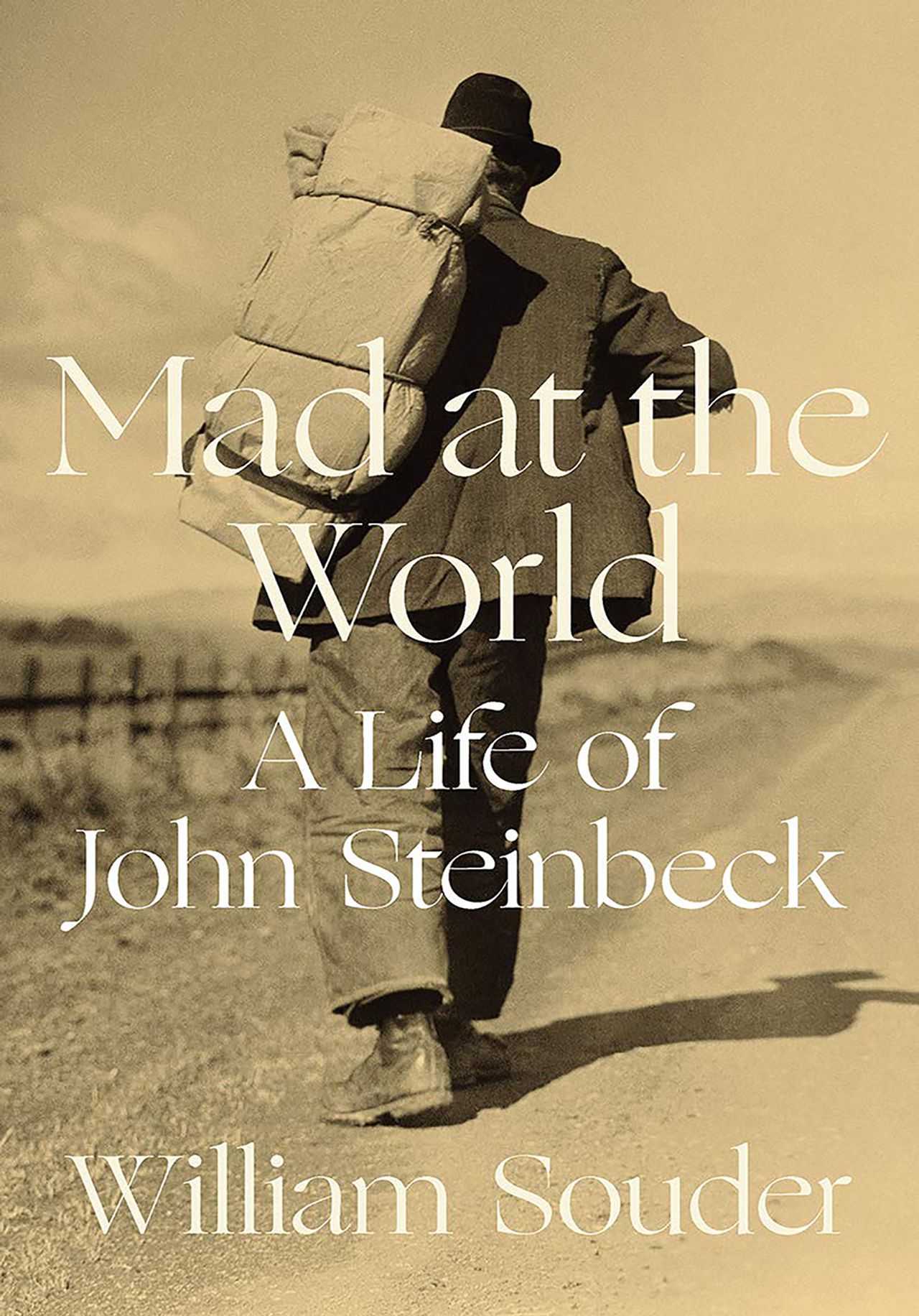 Mad at the World: A Life of John Steinbeck

John Steinbeck has never been considered in the same league as William Faulkner and Ernest Hemingway, his fellow Nobel Prize winners, and yet plenty of his work remains in print, and books about him, including biographies by Jackson Benson (1984) and Jay Parini (1995), regard him as a fascinating cultural figure, perhaps even more relevant to our age than to his own. Steinbeck’s reputation rests on a brilliant seven-year period in which he produced The Pastures of Heaven (1932), The Red Pony (1933), Tortilla Flat (1935), In Dubious Battle (1936), Of Mice and Men (1937), The Long Valley (1938), and The Grapes of Wrath (1939). He did not do this work alone. His first wife, Carol, as William Souder shows, and as Steinbeck admitted, was an indispensable collaborator, providing him with discerning criticism and the impetus to keep going when Steinbeck gave way to periods of self-doubt.

Divorced from Carol shortly after the triumph of Grapes of Wrath, Steinbeck married Gwyndolyn “Gwyn” Conger. During their fraught union, torn apart by the drinking and affairs of both husband and wife, Steinbeck seemed to lose his way as a writer. With his third marriage to Elaine Scott (divorced wife of actor Zachary Scott), Steinbeck recovered his equilibrium. While Elaine did not offer the kind of critical eye that Carol brought to Steinbeck’s career, she became an enthusiast that bolstered his later career efforts with novels such as the epic East of Eden (1952) and the charming Travels with Charley (1962). Souder tells the story of Steinbeck’s marriages with sensitivity and acuity, observing an ebullient Elaine who I met in 1995 when she was enthusiastically touting Jay Parini’s biography.

William Souder, author of biographies of John James Audubon and Rachel Carson, is a natural to take on the life of a writer so immersed in the biology and ecology of human existence. When I reviewed Under a Wild Sky: John James Audubon and the Making of Birds of America (2014), I praised Souder’s “fresh, unsentimental, and complex view of his subject.” I can say the same of Mad at the World, which captures a relentless writer of protest literature. Susan Shillinglaw in these pages (“The Migrant’s Tale”) identifies Steinbeck’s enduring legacy as his concern with the “down and out,” in timeless stories of the “marginalized” that are “still a part of our history. Steinbeck asks us to understand, empathize.” Steinbeck elevated the lives of common men and women, the workers and inhabitants of Cannery Row in the Monterey fisheries and in the Salinas Valley, including the so-called Okies and others who streamed into California from dust bowl Oklahoma and other states during the Depression looking for the land of milk and honey. The figure of Tom Joad, played to perfection by Henry Fonda in John Ford’s film adaptation of The Grapes of Wrath, ennobled and some would say sentimentalized the power of the people.

Souder sees Steinbeck’s empathy growing out of his powerful bond with the land, which becomes in both Steinbeck’s work and in Souder’s a living organism, almost a character. Steinbeck’s greatest work, Grapes of Wrath, begins: “To the red country and part of the gray country of Oklahoma, the last rains came gently, and they did not cut the scarred earth.” Only a thin crust is left, we learn, from all the plowing that has destroyed the ecology of the land, and the soil will blow away like the lives of the farmers bulldozed out of homes they can no longer afford, so that they see in their hard journey to California another start, another home but are treated as contemptible refugees and exploited labor. Here is the first paragraph of Mad at the World:

In the California winter, after the sun is down and the land has gone dark, the cool air slips down the mountainsides that flank the great Central Valley, settling over the fields and tules below. When conditions are right, the night air forms a fog so dense that you cannot see your own feet on the ground. These fogs can last for days, and sometimes fill all 450 miles of the valley.

A natural inevitability saturates Souder’s prose as he describes Steinbeck’s own lament for a life that cycled through itself like the seasons, sometimes making him feel as displaced as the characters he created.

In Souder’s biography, Steinbeck moves about in search of places to live and write with the fog following him: “The warm sun in LA, which was so different from the damp and fog up north, made Steinbeck happy. . . . After months of shifting from one temporary home to the next in Los Angeles, it was a relief to be back in the little cottage on Eleventh Street. Pacific Grove was cool and foggy and felt lush compared to Southern California.” Inner and outer realities become biological in novels like Of Mice and Men as they do in Souder’s biography: “Steinbeck said there was a fog and a wet wind over the peninsula that seemed almost to be coming from inside his head.”

What makes Steinbeck so appealing is his unity of purpose in portraying the inside and outside of ourselves. So long as we are sentient beings, I don’t see how any sniping critic can take that Steinbeck away from us. Understanding that bond with readers also endows Souder’s biography with great unity of purpose. The scenes set on Cannery Row in Monterey, where Steinbeck’s close friend and collaborator on Sea of Cortez, marine biologist Ed Ricketts, had his lab, become extensions of that fog forming the first paragraph of Souder’s biography: “Visitors to the lab loved its narrow view of the ocean and the sounds of the waves breaking against the pilings and sea lions barking and the distant tolling of bell buoys through the fog late at night as Ricketts and his friends talked and drank beer into the wee hours.”

Souder knows exactly how much to say and when to let Steinbeck alone to do the work, quoting this passage from Tortilla Flat:

The night came down as they walked into the forest. Their feet found the pine-needle beds. Now Pilon knew it for a perfect night. A high fog covered the sky, and behind it the moon shone, so that the forest was filled with a gauzelike light. There was none of the sharp outline we think of as reality. The tree trunks were not black columns of wood, but soft and unsubstantial shadows. The patches of brush were formless and shifting in the queer light. Ghosts could walk freely tonight, without fear of the disbelief of men; for this night was haunted, and it would be an insensitive man who did not know it.

What to say about such a beautiful passage? Souder marks the telling phrase with italics: “Without fear of the disbelief of men” and then adds: “words that describe what every writer longs for.”

Souder does not quarrel with Steinbeck’s critics—or rather he measures his words against only the best of them, Edmund Wilson, who “would not surrender himself to Steinbeck, would never let himself believe freely in Steinbeck’s imagination or allow for the possibility that he simply did not understand Steinbeck’s world, which was so often cloaked in fog and hidden away in a far-off valley.”

Souder never makes excuses for Steinbeck, acknowledging the work that is weak, but the aim of his biography is to immerse us in Steinbeck’s world and in his imagination. So it is not surprising when we learn after living in New York, Steinbeck wanted to return to Monterey: “he missed the fog.” Sometimes in a panic about his work Steinbeck just “sat by the fire as the fog rolled in and the tolling of the bell buoy and the barking of sea lions sounded in the distance.” Steinbeck’s appeal is visceral, and so is Souder’s.

The uncanny quality of this biography runs right through to the last sentences: “Steinbeck told many stories, and many were told about him, including this one: A long time ago, late at night in the town of Salinas, California, a boy named Glenn Graves stirred in his sleep. He got up and walked in his pajamas to the window, rubbing his eyes. He looked out and saw curtains of fog hanging above Central Avenue. It was quiet. Nothing moved. But he could see across the way, to a window in the upstairs bedroom of the big house on the other side, and there was a light on in it.”