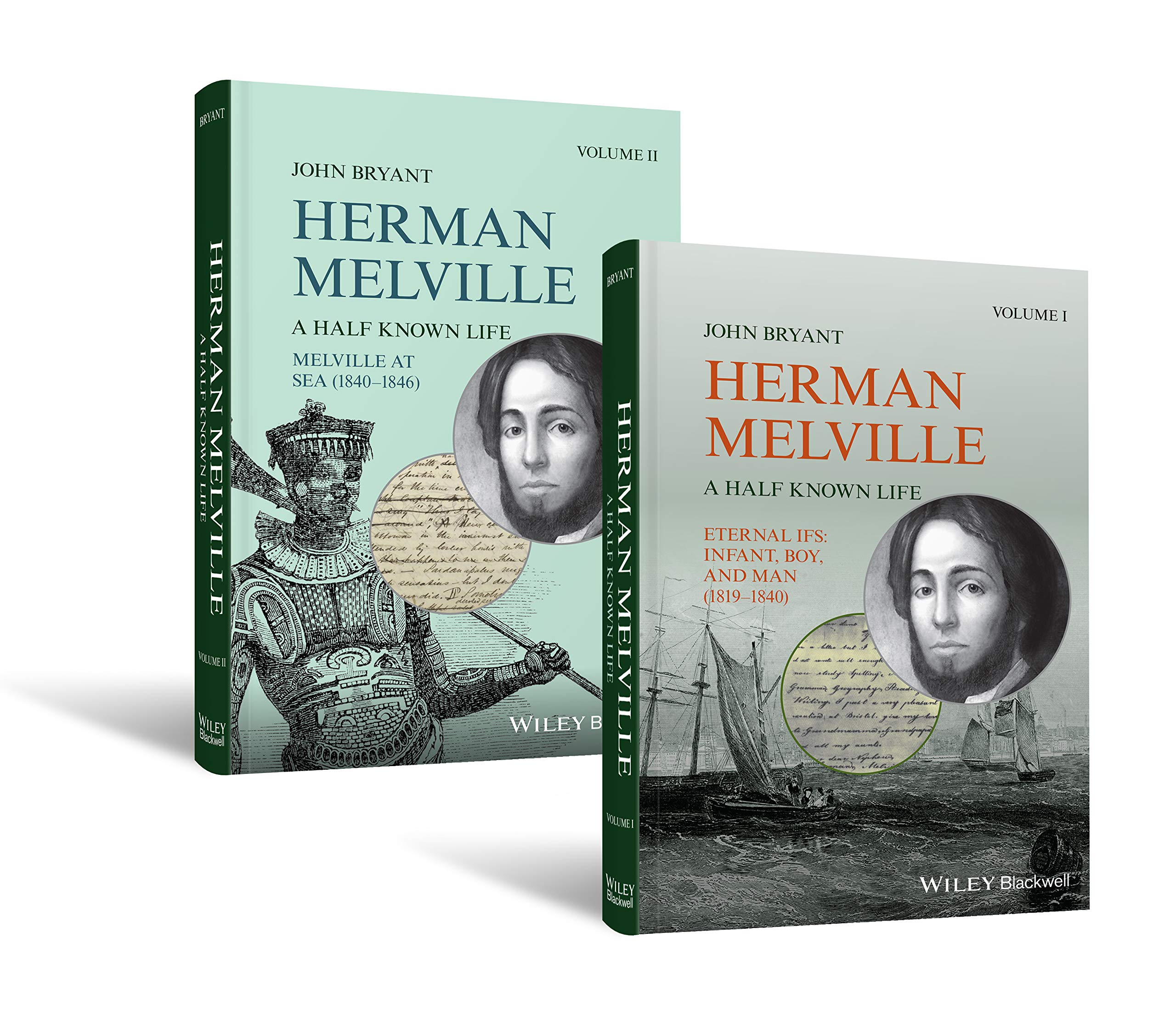 John Bryant, a renowned Herman Melville scholar, writes in the wake of a veritable palimpsest of biographers: Raymond Weaver (1921), Lewis Mumford (1929), Newton Arvin (1950), Leon Howard (1951), Edwin Havilland Miller (1975), Laurie Robertson-Lorant (1996), Hershel Parker (two volumes 1996, 2002), and Elizabeth Hardwick (2000). The usual question, put with the confident ignorance that passes for authority with reviewers, is: What more could there be to say? The question should be: Why not another Melville biography? If there have been so many, then something is missing or misunderstood that biographers continue to pursue. I’ve read Bryant’s predecessors and had more questions to ask than they could answer, which is why one biography is always the answer to another or several other biographies, especially for a writer as protean as Melville.

But half-known means something else as well. The biographer shows us that Melville only half-knew himself, and like all of us, had sides revealed to others that he could not see. That is, after all, the rationale for biography. To those who ask how can a biographer know a subject, let it be said the same question ought to be addressed to the biographical subject, who moves with parts of himself missing that the biographer can, sometimes, recover. Whatever the limitations of biography, the astute biographer proceeds, as Bryant does, interrogating the half-knowledge we keep trying to supplement.

Bryant’s notes reflect his deep knowledge of Melville scholarship and also of the image perpetuated in earlier Melville biography. Perhaps this is why he insists in volume one that Melville was “more of a homebody than the obsessive and manic-depressive that some imagine him to have been. He was happier than we want him to be, both despite and because of his family.” Earlier Melville biographers shaped certain expectations, and Bryant sets out to upset some of them. Here is another good example from volume one in his treatment of mother Melville: “She was strong and resourceful but not always mindful of how her ‘spirit of complaint’ might diminish the spirit of joy in the hearts of her children. Yet she was not the stereotypical harridan and impediment to her most famous literary son that many are inclined, or want, to see. Rather, she possessed the hard‐earned, truth‐speaking voice of a woman who, with eight mouths to feed, endured the anxieties of widowhood, debt, and thwarted expectations.”

The brilliantly chosen subtitle reflects Bryant’s plangent recognition that a part of the Melville mystery can never be fully plumbed. Letters have gone missing, swaths of Melville’s life out at sea cannot be fished, and he left behind no memoir or diary that opens up the inner man. Like other Melville biographers, Bryant sifts through the fiction to detect elements of his subject’s life, but more than any other biographer he uses a finely grained imaginative sieve, noting, for example, what can be known of Melville’s actual experience in the Marquesas that led to the publication of Typee (1846) but also how that experience felt differently to the writer no longer a sailor, a writer concerned with narrative pace and the details (sometimes reported, sometimes invented) that gave verisimilitude to his novel. How can Bryant know that much about Melville’s feelings? By a meticulous and perceptive study of the Typee manuscript, tracing the development and pattern of revision as the novelist reworked his memories and research (drawing on travel books) into a narrative. As Bryant observes in an aside in volume two: “Readers need not see how the sausage is made, although biographers are obliged to check the machinery.”

Bryant goes the distance, seeking to put himself in Melville’s world, pointing out in volume two that “notions of private and public spaces aboard a whaling ship did not occur to me as I white‐knuckled the shrouds going aloft but only now as I write about them in retrospect. Memory and meditation are their own kind of experience apart from the immediacy of the past event, and perhaps all that I can do in order to find links between one writer’s life and his creative process is meditate on my own experience, taking care not to fall into a false identification with Melville, who I am not.”

Nevertheless, sometimes Bryant sounds Melvillian when, for instance, describing the composition of Typee: “Throughout the spring of 1845, Herman was buoyed by the reciprocating energy of writing: the exertion he put into transcribing thoughts and the jolt he received back in reading and revising; it was like the pulsing throb of the universe.”

Every biography reflects the times in which it is written. In this case, it is Black Lives Matter, which can be felt in Bryant’s persistent tracing of what he calls Melville’s “black consciousness.” He shows how carefully Melville observed African Americans during his childhood on New York City streets and on his voyages, and how they appear with a distinctiveness in his fiction. Melville goes out of his way to raise questions about race in Typee and “Benito Cereno,” but also in Moby-Dick, Bryant points out, creating a more racially diverse crew than in fact was the case on his own whaling adventures.

For our moment, the biographer breaks Melville out of the isolated great writer mode that dominates earlier Melville biography and presents the second son of a large family, with a merchant father who traveled abroad with a literary sensibility that engendered a household of writers—both sisters and brothers who read one another’s compositions and commented upon them. In the lead, first-born Gansevoort, succeeded his father, who died abruptly before his children were grown up. Gansevoort lorded over the supposedly slower Herman, instructing him and his sister Augusta and creating an air of strenuous achievement that eventuates in Gansevoort’s editing of Typee and a Gansevoort engineered sale to both English and American publishers. As Bryant puts it: “In handing off the ragged manuscript, the two brothers replayed a ritual going back to the Melville family writing coterie of 1836–1838. In their Albany parlor, Gansevoort had edited Herman’s and Augusta’s school compositions, insisting on grammar, mechanics, fluency of prose, and invariably his own ideologies.”

Volume two concludes with Herman on the cusp of fame, while Gansevoort dies in a shocking state from the mercury poisoning absorbed in his business as a hatter before he turned to a promising career in the law and politics. Gansevoort, the dandified, pomaded orator who helped James K. Polk get elected president, the older brother who Herman had chafed against, in the end, became Herman’s champion, collecting reviews of Typee that read like “auguries of his brother’s brilliant career and war cries to come.” In a dramatic scene, one of many in this biography, Herman Melville stands on the wharf awaiting the ship bringing home his dead brother’s body, knowing, in Bryant’s words, “his brother had loved him.” We don’t really know what happened on that wharf, but perhaps the biographer can be forgiven for adding: “Standing and waiting he [Herman] could not prevent the swarming of ideas for his next book, and the next.” Backing up this sentence is this biography’s pursuit of Melville’s teaming mind, which never suffered from writer’s block.

This is to be a three-volume biography, which means that volume three will have to pack in the prodigious second half of Melville’s life and career, contending with everything from Moby-Dick to Billy Budd and all the fiction and poetry in between. As important as Gansevoort is at the end of volume two, in volume three Herman’s sister Augusta takes over, wielding considerable influence.

This biography might have been four volumes, but Bryant will bring it off in three because of his technique. By the end of volume 2, he has already delved into Melville’s poetry, Moby-Dick, Pierre, Israel Potter, “Benito Cereno,” The Confidence Man, and “Bartleby,” showing how those mature works had their origins in an earlier Melville. Bryant has understood that in a multi-volume biography readers cannot be expected to wait too long for some discussion of the great works, even if, chronologically, they belong to a later period.

“Can we know this life?” Bryant asks at the end of volume two. “We cannot, but we can half know how the strands of a consciousness weave themselves into writing, and we can begin to know how, in writing out memory and invention family and siblings, fright and love, self and other, blackness and whiteness, God and being, this writer of fictions cast ‘a light and a shadow’ on life to render ungraspable feelings into multiple worlds of knowing.” Bryant imagines, in the last sentences of volume two, that “as the tackle lifted the lead-lined casket out of the dark hold into the light and down to the east side wharf, Melville reached up to ease the twisting coffin onto the pier. The broken brothers were whole again.”