Franz Kafka: The Poet of Shame and Guilt 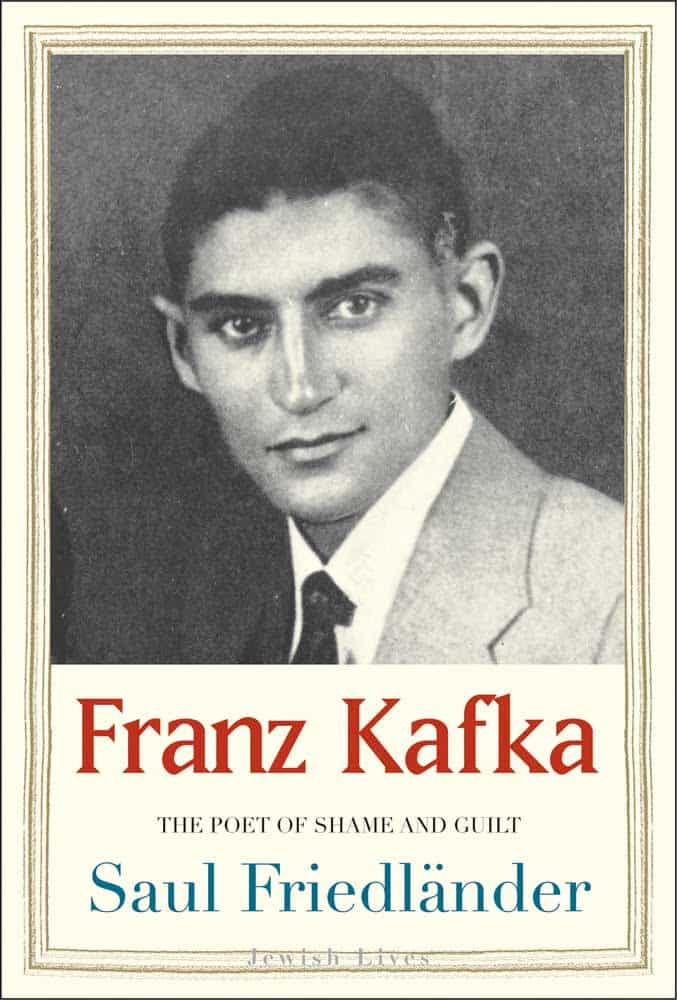 Franz Kafka: The Poet of Shame and Guilt

Saul Friedlander is a historian and Distinguished Emeritus Professor of History at UCLA, noted for his scholarly work on the Holocaust, and winner of the Pulitzer Prize in 2008 for the second volume of the Years of Extermination: Nazi Germany & the Jews, 1939-1945. Not normally given to literary exegesis, he claims he felt compelled to add his “essay” to the voluminous critical literature on Franz Kafka by the many overlapping links that connect him to the Czech-born writer: both Prague Jews, both writers, both frequenting the same schools and engaging in similar professions, both with family members who perished in the concentration camps.

The resulting dissertation is clearly not intended for a neophyte to Kafka studies. Friedlander makes allusion to the works of the major Kafka specialists, but also draws heavily on diaries and letters to and from Kafka himself, without providing a framework for a basic understanding of Kafka’s unique literary output and its effect on the world of letters. He assumes readers of his book have already done their homework, read and reread Kafka’s works, and are at least familiar with the trajectory of his life. If a reader comes to this book without having read any of Kafka’s books, without having been captivated, intrigued and spooked by his paranoid fantasies and often horrific characters, and without a knowledge of the influence Kafka exerted on future writers (Sartre, Camus, Borges, Nabokov), then the reader will have little interest in learning more about the doomed author’s life.

The focus of Franz Kafka: The Poet of Shame and Guilt is primarily on gaining insight into the man, his milieu, his psychological makeup, his relations with his family, the various women in his life, and his fiancée and various girlfriends. Friedlander ventures into an analysis of the various works, but only to point out correspondences between recurring themes and Kafka’s real life.

A second thesis is that Kafka, as a non-religious person, was conflicted about his Jewish identity, letting Jewish elements crop up often in his books. He may also have been somewhat of a Zionist and flirted with the idea of someday moving to Palestine.

Friedlander also suggests that the writer’s poor relationship with his father and, to some extent, the rest of his family is reflected repeatedly in his work, particularly in Metamorphosis, where an apple thrown by the father lodges in Gregor’s back, causing the fatal infection that spells his end.

Lastly, Friedlander points to the prevalence of torture throughout Kafka’s work, citing examples in The Penal Colony, Hunger-Artist, and The Castle. He then contends that Kafka was something of a sadomasochist and possibly a closet pedophile—in his fantasies, at any rate.

Overall, the picture depicted is that of a tortured soul who somehow managed to work successfully at an office job in the insurance world while scribbling away madly, dedicated to the vision of himself as a writer. He flirted with the concepts of love and marriage but managed never to pull the trigger. He had close male friendships and his best friend, Max Brod, became a fervent supporter and promoter of his stories and novels.  After Kafka’s early death at 41 from tuberculosis, Brod worked hard to edit and promote his friend’s work but, Friedlander claims, had too liberal a hand in censoring what he considered to be unacceptable language, allusions, and situations. Friedlander points out that Brod’s translations were misleading and inaccurate in key passages, and he worked to suppress the less acceptable notions of his dear friend.

Franz Kafka: The Poet of Shame and Guilt provides an interesting read for Kafka devotees and those just curious to know more about the writer’s life and the possible sources of some of his more unusual ideas. For readers who feel that a literary work should stand on its own merits, and dislike tracing correspondences to happenings or personages in real life, this may not be the ideal read. Hopefully, this book sparks an interest in the original texts and push even seasoned readers of Kafka to reexamine his oeuvre and discover the true meaning of the word “Kafkaesque.”