Ernest Hemingway and the Pursuit of Heroism 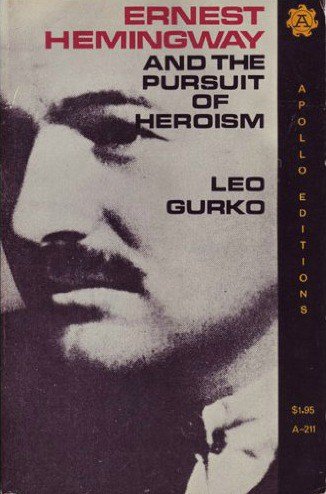 Ernest Hemingway and the Pursuit of Heroism

Leo Gurko, professor of English at Hunter College (CUNY), and one-time chairman of the department, has written an ambitious book text concentrating on all the published work of Ernest Hemingway (1899–1961): articles, novels, fiction, non-fiction. In nine succinct chapters, he has managed to capture the essence of Hemingway the writer and Hemingway the man.

Gurko’s first chapter describes Hemingway’s life and is essential to an understanding of his work. Hemingway’s father was a prominent doctor in Chicago and his mother a well-known opera singer. The parents were highly moral individuals and strict disciplinarians. This is important to note because Hemingway left home in 1918 to become an ambulance driver in Italy in World War I, where he was seriously wounded. Returning to the United States, he came under the tutelage of Sherwood Anderson, who recommended newspapering as a way to get back to Europe—Paris in particular. Hemingway was employed by newspapers in Kansas City and Toronto, becoming a foreign correspondent living in Paris in the “golden era” of the 1920s. He got to know Gertrude Stein, Ezra Pound, F. Scott Fitzgerald intimately, among others. He married four times and spent much time in Spain and Italy researching and writing for newspapers while beginning to write short stories for magazines and developing novels. In the 1930s, he settled in Key West, Florida, and later in Cuba while frequently returning to Europe on assignment. He joined U.S. forces in Normandy and Europe during World War II, helping to liberate Paris. Later in life, he moved to Idaho. His father committed suicide by shotgun in 1928. Hemingway, hearing the news in Paris, said he’d probably go the same way. Regretfully, this is what happened on July 2, 1961, when he shot himself in the head, aged 60.

Hemingway’s style of writing suited his nature. He wanted to get to the depths of conflict and ethos of man, but do so in succinct, specialized style. Brevity was something he found essential in the portraits of his heroes—A Farewell to Arms; The Sun Also Rises; For Whom the Bell Tolls (from John Donne); The Old Man and the Sea. Each of the heroes of these stories dealt with some form of psychological and emotional conflict of a specific, detailed nature, and their heroism was not necessarily viewed from success or failure as much as stature, purpose, and an inner form of human realism that touched the soul of the reader and writer alike.

Gurko notes the central theme in Hemingway’s longer work is heroism. “Contrary to general opinion, his novels are not primarily studies of death or simply researches into the lost generation. They are not just demonstrations of the world’s emptiness, of how all things are nada. They are essentially portrayals of the hero, the man who by force of some extraordinary quality sets the standard for those around him.” (p. 55) In The Sun Also Rises, there are two heroes, one open, and one hidden. The open hero is Pedro Romero, the superb young bullfighter at the height of his power; the hidden hero is Jake Barnes, the American expatriate wounded in the First World War. Romero does not “quail” before the lunging horns of the bulls, nor does Jake flinch from his painful lot. “In Jake, Hemingway has created a special type of modern hero, the hero who functions inside the façade of the antihero. It is hard to say which is more compelling and persuasive, the performance or the disguise.” (p. 63)

In A Farewell to Arms Hemingway writes as if remembering Romeo and Juliet, but, in this case, the ‘star-crossed lovers’ are Catherine and Frederic. They love on borrowed time, Frederic having deserted his Italian army at the end of World War I as an ambulance driver. In their final meeting in Milan, Frederic quotes from Andrew Marvell: “But at my back I always hear/ Time’s winged chariot hurrying near.” (p. 109)

For Whom the Bell Tolls is Hemingway’s great attempt to represent the causes of the Spanish Civil War, Loyalist, and Fascist. His hero is the Loyalist, Jordan, who loves Maria but, in the end, knows he must attack a fortified bridge and defend against the Fascist attackers. Despite the hopelessness of his mission, he goes ahead with it, knowing he will not survive.

Hemingway wrote long and lovingly of Spain and bullfighting; seriously and sadly of its Civil War; World War I from the eyes of an ambulance driver; and Paris in the 1920s as a “moveable feast.”

Gurko notes Hemingway has been called “existentialist, realist, nihilist, romanticist” (p. 239), many others, but sees his search for “relevant and sustainable heroism” as “the heart of his work.” (p. 239)

Gurko is to be commended for a serious and committed study of a great writer. Students and scholars alike will fully benefit from his style of writing and expertise in the literature at hand.