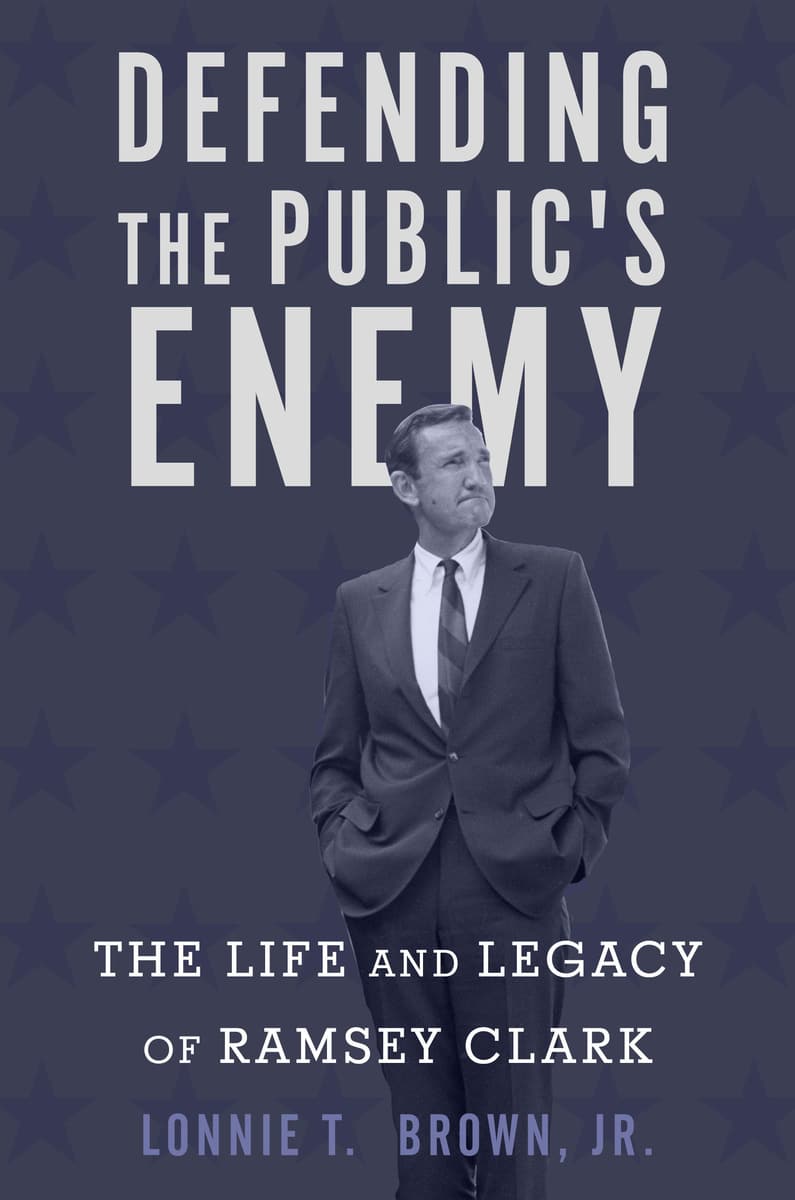 To call Ramsey Clark (1927-), Attorney General in Lyndon Johnson’s administration, and one of the principal architects of the 1965 Voting Rights Act, a controversial subject, is an understatement. How to explain the volte face of a public figure who out of office defended America’s enemies—most notably Saddam Hussein? This is the challenge confronted by Lonnie T. Brown, Jr., the A. Gus Cleveland Distinguished Chair of Legal Ethics and Professionalism at the University of Georgia School of Law.

Brown began this first biography of Clark without knowing how much cooperation he would receive from his subject, with no assurance that he could explain, let alone, reconcile the blatant contradictions that even Clark’s closest friends and admirers choose not to defend, let alone explain. It took Brown a decade to research and write his book, and even with Clark’s openness to biographical inquiry, the biographer confesses he had to abandon what turned out to be unpersuasive rationales for his subject’s behavior. Confronting the possibility that he could not complete his book, Brown ultimately arrived at a narrative that includes his doubts about any unifying portrait, preferring, instead, to share the process of interviewing Clark and his friends, reporting their perplexity over his puzzling actions.

If Brown cannot offer an overarching theory of the case, he is able to center his narrative on certain defining moments of Clark’s life, beginning with Clark’s investigation of the August 11-16, 1965 Watts riots in Los Angeles. Brown is impressed with Clark’s meetings with the community, with how he listened patiently to strident attacks on him as a representative of the government they distrusted and vilified. Out of the crucible of confrontation, he forged convictions that guided him for the rest of his public life. He developed a set of policies about community policing that presage what has been demanded by the Black Lives Matter movement. He codified his understanding of crime and punishment in his best-selling book, Crime in America (1970).

Even as attorney general Clark resisted President Johnson’s pressure to prosecute the Black Panthers and other Black radicals such as H. Rap Brown and Stokely Carmichael, Clark opposed J. Edgar Hoover’s wiretapping of Martin Luther King Jr., but went beyond that case to reject wiretapping itself as an invasion of civil liberties and ineffective as well. He regarded the police raids that resulted in the deaths of Panthers, other radicals, and even religious extremists like the Branch Davidians, as examples of establishment outlawry. This hounding and killing of dissenters, in Clark’s view, deprived the justice system of the integrity required to earn the confidence of those opposed to the government. Clark contends that he has been consistent inside and outside of government by demanding integrity in the administration of justice.

Brown canvases the opinions of Clark’s colleagues, some of whom think he acts out of guilt over his complicity in the actions of the Johnson administration during the Vietnam War, although in public and private Clark has rejected this psychologizing. Brown quotes Clark on the television program, Face the Nation: “I think each of us has an obligation to judge the present, and work for the future, and I don’t feel inhibited by the past . . . If I felt some mental block because of some position I took in the [past], I wouldn’t be worth anything, would I? You have to go on.”

Clark went beyond just opposing the war. He went to North Vietnam to denounce the American bombing of civilian populations. It was his highest moral obligation, he insisted, to make such trips. Not to have gone to North Vietnam, he asserted, “would have been extremely damaging to me as a human being.” Even so, for many, as Brown admits, such visits looked like siding with the enemy. Some prisoners of war (Brown quotes them) welcomed Clark’s visits and his efforts to stay in touch with their families.

Brown describes Clark’s actions without endorsing them—in fact, he expresses doubts about many of Clark’s clients even as he tries to fathom Clark’s psychology and beliefs. To Clark’s way of thinking, Brown explains, he was holding his government to account and acting on his love of a nation that had violated its own democratic principles. Clark’s view of America as a degenerate democracy that has devolved into plutocracy has driven him to defend anyone he deems to have been demonized by his country. So even Saddam Hussein, in Clark’s view, deserved a defense. How Clark, a staunch defender of human rights, could turn Saddam Hussein into a victim is beyond Brown’s brief, so he does not really try to defend his subject’s choices. Indeed, Brown concludes in a somewhat muddled assessment: “America seems to have become Ramsey Clark’s demon and that led to his persistent evangelical denouncement of an opposition to it. This perspective attracted him to individuals and causes that cannot reasonably be explained, especially with regard to someone so unfailingly moral and principled.”

Brown examines the man himself, revealing his warm-hearted treatment of people, his role as a loving family man, and Clark’s engaging temperament as revealed to the biographer in their various meetings. Brown, an African American, testifies that he has never met a white person as comfortable as Clark is with Black people: “Never in my 54 years . . . have I met a white person who unquestionably views all black people as equal or better except for Ramsey Clark.”

The most influential figure in Clark’s life has been Martin Luther King, Jr., Brown asserts. King, Clark realized, did not let fear deter him. Clark believes, Brown notes, that fear has turned people away from understanding the plight of others. Brown sums up the results of fear this way:

Fear can corrupt by causing individuals to refrain from acting in a fashion consistent with their conscience, such as by tacitly accepting segregation in order to avoid any sort of confrontation. It can also inspire overtly corrupt behavior, as was the case with those who responded violently to peaceful civil rights protests. Fear of what the success of the movement might have meant for their positions in society caused these individuals to act repressively in an effort to preserve the status quo. Fear, then and now, can cause police officers to overreact to tense situations or to carry out their responsibilities blinded by stereotypes.

Our government, Clark contends, “wants citizens to be afraid in order to exert control over them and to limit their ability to be free.”

The most poignant moment in this biography occurs when Brown spends time with Clark’s deaf and mentally disabled daughter. As Clark is talking affectionately about Ronda, she gets up from the couch and belches. She is unaware that she has interrupted Clark’s conversation with Brown, who suddenly realizes “how free Ronda was. She has no reason to care what anyone thinks . . . It occurred to me that her father has a very similar disposition, which may have been inspired or cultivated in part, by his relationship with Ronda. How else could he endure the unbelievably harsh criticism that has been hurled at him over the years?”

Brown writes in an informal, engaging way, but sometimes his prose is too much like loose talk and is filled with clichés: “dip his toe into,” “dragging their feet,” “out of sight, out of mind,” “going through the motions.” In describing how Clark is like his father, Supreme Court Justice Tom Clark, Brown writes “the apple certainly did not fall far from the tree.” He introduces a flashback as “a brief step back in time.” Sometimes the word choices are questionable as when he speaks of the “bratty conduct” of Watts rioters. Describing Dr. King’s opposition to the Vietnam war, Brown summarizes: “We had inserted our nose where it did not belong.”

Brown is refreshingly honest about those moments when he cannot get Clark to delve more deeply into his motivations. I think this is not uncommon with certain public and political figures who even at their friendliest withhold a part of themselves—perhaps both from others and from themselves. It was what I encountered in a relationship with the British politician Michael Foot, who like Clark, invited his biographer into his home, shared much of his personal and political life, and yet, in the end, reserved certain thoughts to himself alone, if in fact he went so far as to examine his own thoughts.