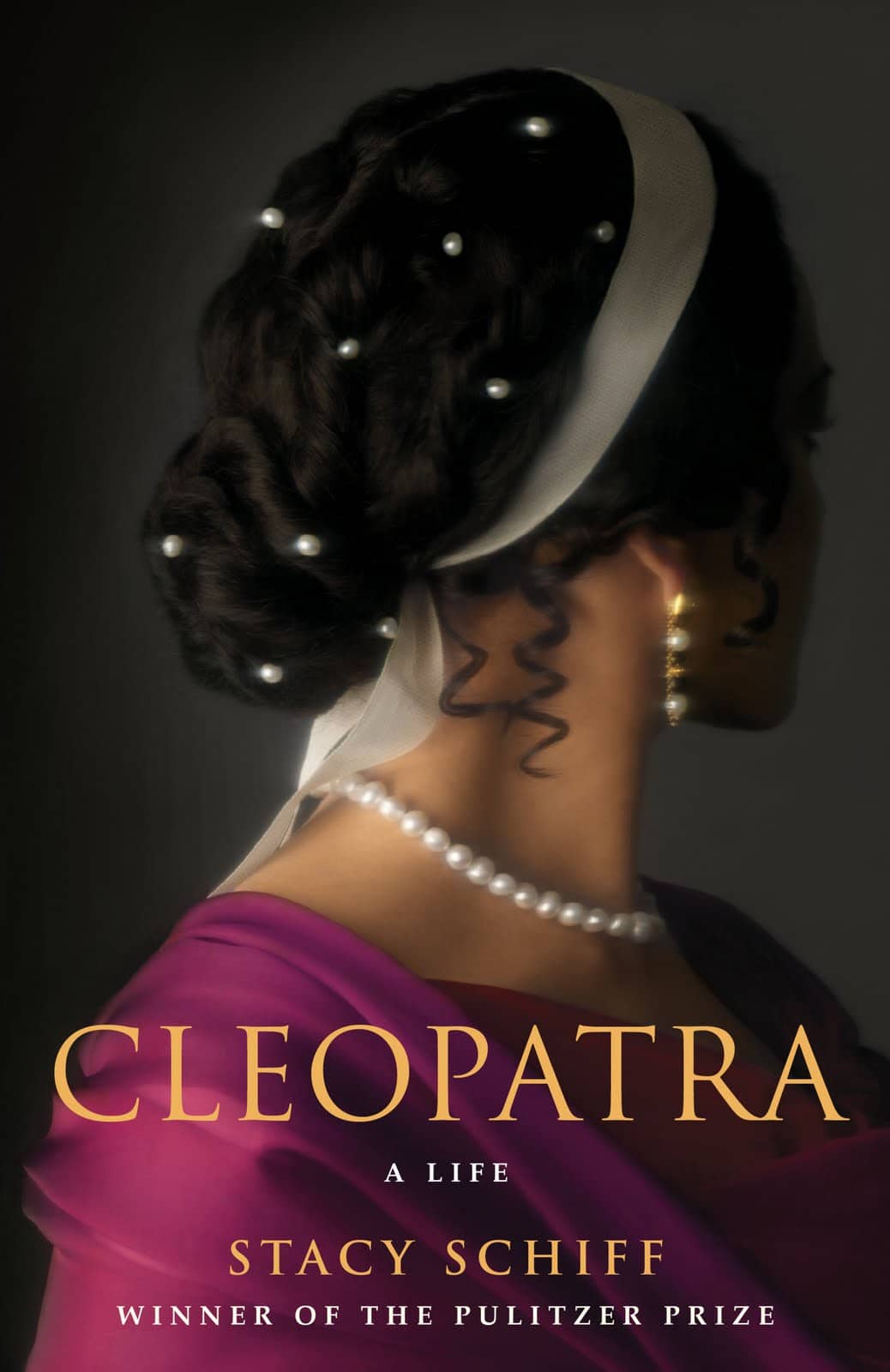 We are told not to judge a book by its cover. In this case, however, Stacy Schiff chose an appropriate image for her work. Almost in shadow, an elegant woman is looking away from the viewer. Indeed, the face of the last ruler of Egypt (69 BC–30 BC), remains a mystery. Still, writers from Cleopatra’s day up to the present make much of the queen’s supposed looks. That is also the case with Cleopatra: A Life. Pulitzer Prize winner Schiff spends time on the issue, but seems quite disdainful of Cleopatra’s contemporary critics who try to make her into a seductress who used whatever beauty she had for immoral purposes. Schiff presents no new evidence either way. As we’ve known for some time, the only contemporary images of Cleopatra that remain are from coins.

Schiff’s stance seems to be that Cleopatra was attractive enough, but relied more on her intelligence and charm to get what she wanted. Fair enough, but we should not forget she was worshipped as a demigod and a powerful queen; her actual appearance was, in some respects, besides the point. Perhaps the most interesting aspect of this issue is the double standard applied to her. As a rule, historians are not interested in the looks of their male subjects and how they may have used their appearance to get what they wanted.

The ancient sources like Pliny and Cassius, both Romans, perpetuated the ancient stereotype that charming women could seduce even the strongest of men and lead them to ruin. In Cleopatra’s case, this meant none other than Julius Caesar and Marc Antony. The Romans who wrote about these events had more in common with Herodotus than with modern historians who at least try to make an objective analysis of their subject. These ancients were less concerned with facts than with popularizing the point of view or conjecture that best suited Rome. Unfortunately for Cleopatra, there is enough drama to fill a Greek or Shakespearean tragedy that could be used to show Caesar and Antony being led to ruin by her charms. However, Schiff makes it clear this is only one interpretation of these events. The reason for these biased accounts was that Roman writers had every reason to portray Cleopatra in the worst possible light, as the opposite of her virtuous overseers. Allowing for this is one thing, but it seems that Schiff goes a little too much out of her way to put her in the best possible light.

For instance, she overestimates Cleopatra’s historical importance a bit when she posits the idea that the queen’s suicide ushered in the beginning of the modern world. She was certainly a significant leader on the world stage, able to manage challenging and dangerous situations. She was forced to maneuver among fickle Roman generals to do what was best for her country and her own survival. As Schiff points out, Cleopatra’s Egypt was rich and helped finance Rome’s wars, both external and internal. But her help did not necessarily endear her to Romans who didn’t want to be reminded of their weakness by a young, foreign queen.

Cleopatra’s interactions with Rome and with particular Romans form the framework of her reign and of Schiff’s study. Cleopatra was famous, but not well known. Egyptian sources are scant, not even a contemporary bust or statue exists. As Schiff points out repeatedly, most of the commentators and biographers were Romans, divided by culture, loyalty, and language. “She elicited scorn and envy in equal and equally distorting measure…” p. 322. Unfortunately, we do not get enough insight into what her own people thought of her beyond the usual official fawning any dictator receives.

So it seems Schiff and the readers are left struggling with what people said and wrote about Cleopatra and who Cleopatra actually was. Schiff does what she can to bring color and depth to that portrait, but we get the sense that by the end, the Egyptian monarch is still facing away from us, still somewhat mysterious. This mystery allows a certain amount of legend and romanticism to persist about Cleopatra. However, Schiff does provide enough detail to make a convincing case that her Roman biographers did her and everyone who wants to know the truth a great disservice. Her book helps to rectify this, to remind us that a person is much more than the sum of their detractors, and that ultimately Cleopatra existed independently of the people who, for their own purposes, sought to define her.