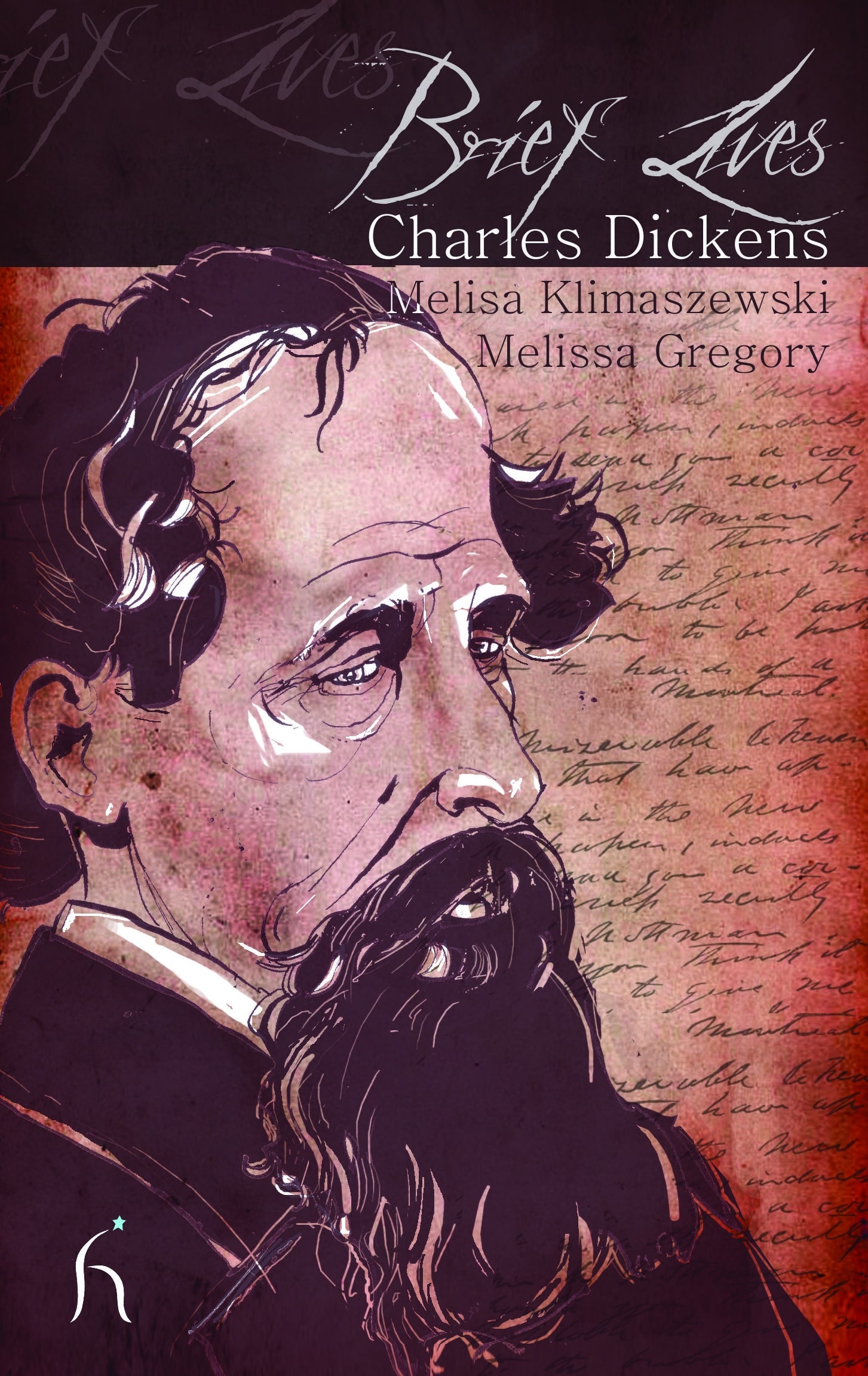 When it comes to an author with the enormous energy that Charles Dickens had and the voluminous outpouring of work that he accomplished, it can be very helpful to have a concise framework for attempting to understand his life. Melisa Klimaszewski and Melissa Valiska Gregory, scholars at Drake University and the University of Toledo respectively, and each specializing in Victorian life and literature, have joined forces for this challenging task for Hesperus Press’s Brief Lives series.

Coming in at just over a hundred pages, the book divides Dickens’ life into five sections, followed by a brief “Afterlife.” Although the authors wonder in their introduction about where to begin with such a multifaceted personality, in the end, they decide to begin at the beginning. If a somewhat conventional choice, the details of Dickens’ childhood more pertinent than most because of the tribulations and challenges he underwent, and also because his many unforgettable portraits of child protagonists make his own early life, and his subsequent understanding of it, of particular interest.

As is fairly commonly known, Dickens’ family ran into financial difficulties, and his parents and some of his siblings ended up in debtors’ prison, while the twelve-year-old Charles was given employment in a blacking factory, where he spent long hours applying labels to bottles of boot blacking. He wrote about this experience many years later in the only fragment of autobiography that we have, which he sent to his friend and future biographer John Forster. The authors poignantly tell us that when Forster had previously asked his friend about that time, Dickens had only bowed his head and refused to answer.

Gregory and Klimaszewski caution us not to place undue emphasis on this lone autobiographical source. They remind us that Dickens “rarely lost the opportunity for rhetorical performance. Even the briefest of his letters reveal a keen awareness of self-presentation.” They go on to say that by 1847, when he wrote the letter to Forster, he would have been conscious that anything he wrote would find a public audience.  They point out that, although truthful, “his account also deflects any class snobbery against an author who had worked in a factory instead of going to school.” And they make the important distinction that Dickens may have been an advocate of the poor and the working class, “but he always adopted a middle-class perspective.” (page 19)

Moving on to the section the authors title “Boz,” a nickname Dickens had originally given his brother Augustus and then taken back as his own nom de plume, the authors follow him on his journey from newspaper reporting through his fictional sketches, playwriting, and eventually novels. He also gradually shifted from the role of reporter to that of editor-in-chief of a leading journal. Perhaps in the interest of space, this book is quite sparing in quotations from Dickens’ own work, but quoting from his very first published sketch, “A Dinner at Poplar Walk,” the authors show that the Dickensian flair was there from the very beginning.

They also point out that, despite early success, Dickens was not completely committed to the writer’s path initially, but was also drawn by a life in the theatre. They reveal how close the matter was by telling us that Dickens went so far as to ask for an audition at Covent Garden Theatre in the year before publishing his first story. Fatefully, he succumbed to a bad cold which caused his entire face to become inflamed and canceled the audition. Although he asked for a future chance, he never took it. While he continued to be drawn to theatrical involvement his whole life, this apparently was the end of his serious aspirations as an actor.

This is also the period in which Dickens met and married Catherine Hogarth. The authors feel it is worth telling the story of his previous love affair with Maria Beadnell, as it illuminates some of the themes of his later life. Above all, they show how his extreme sensitivity led to feelings of being slighted, all the while protesting his own innocence in any dispute. Although this biography is notably restrained in matters of speculation, the authors attribute the successful period of Dickens’ marriage in part to Catherine’s calmness and ability to accommodate his more demanding personality.

The outsized nature of Dickens’ life becomes apparent even in this small volume. At the same time, he was writing the novels that would make him famous, he was also involved in multiple projects and an extremely active family and social life. As the joint editors of several republications of his Christmas “Extras” for Hesperus Press, Gregory and Klimaszewski are perhaps especially aware of his role as editor. He seems to have enjoyed writing a framing narrative, such as the discovery of a piece of luggage, and then asking other writers to supply the stories that would become its contents. Though the contributors didn’t know what each other were writing, the authors tell us that “startlingly coherent themes or motifs appear with some frequency to link the stories together.” (page 65)

The last section of the book that speaks directly of Dickens’ life is called “Partings” and details the massive sea change that Dickens underwent, when, upon meeting the actress Ellen Ternan, he dissolved his life as he had known it, separating from his wife and forcing his many children to choose between them. With the restraint that is customary in this volume, the authors outline the facts as they are known, indulging in little speculation as to the reasons for them. What they concentrate on instead are the great lengths Dickens went to keep his relationship with Ternan from public knowledge, and the influence he exerted on friends and family alike to keep it a secret. His first biographer, John Forster, doesn’t reveal it, nor did Ternan herself, not even to her own children. His reputation remained paramount to him till the end.

In death, though, Dickens was not so successful in dictating terms. As the portion of the book portraying his life draws to a close, Dickens is quoted as saying in his will, “I emphatically direct that I be buried in an inexpensive, unostentatious, and strictly private manner.”(page 93)

On June 14, 1870, however, he was buried at Westminster Abbey. His afterlife, which is in the hands of his readers, had already begun.