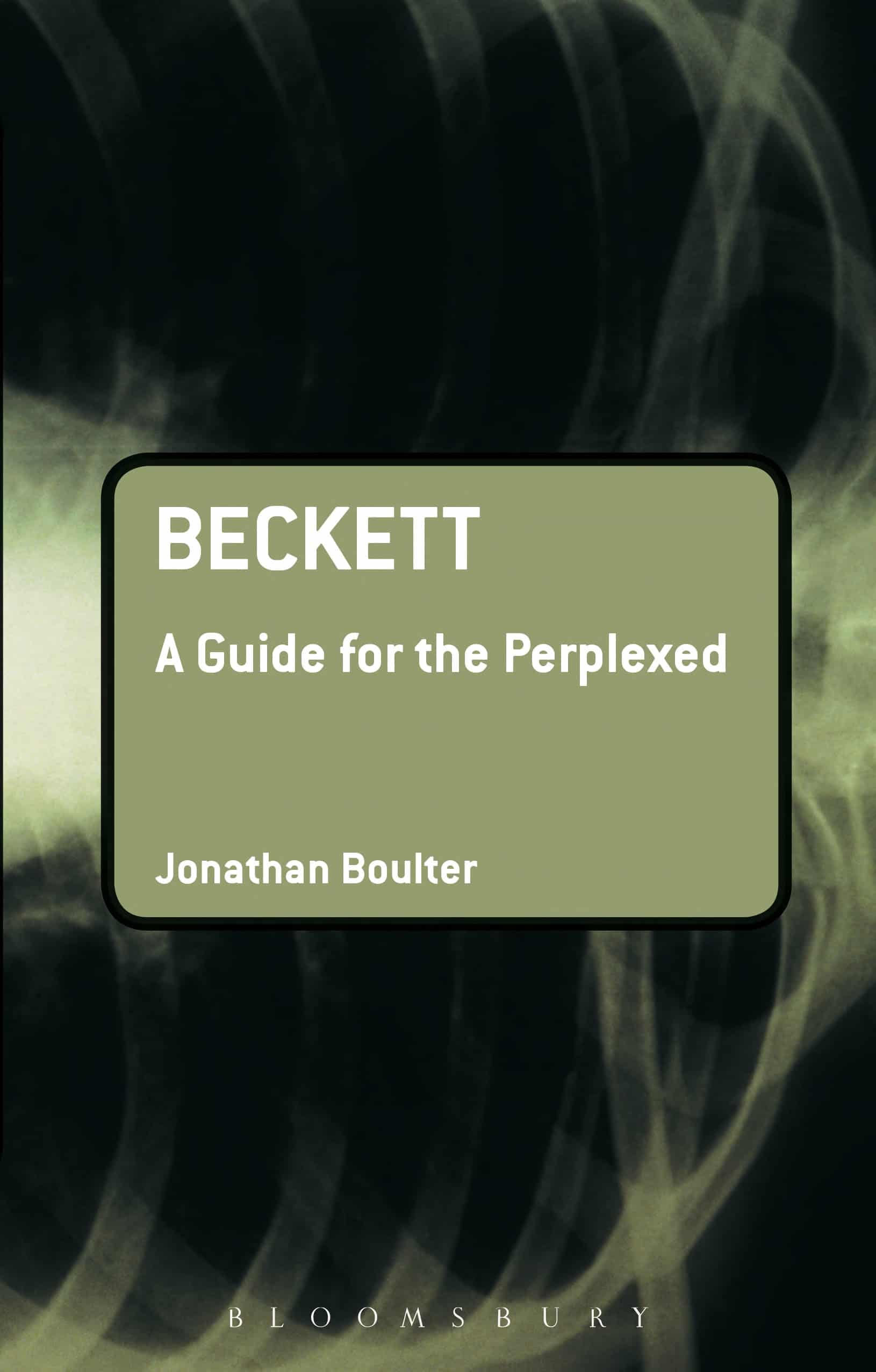 The Cambridge Introduction to Samuel Beckett

People who read serious literature for pleasure understand that the consolations of art sometimes require a bit of effort: decoding the chewy language of a Shakespeare sonnet, for example, or unpacking the psychological complexity of a Henry James novel. But most readers persevere, confident that the pleasure of discovery will outweigh the interpretative challenges along the way. But what about a writer whose work seems to mock the very idea that consolation—or pleasure—can be found in art? Or even in life?

There’s a word for such a situation: Beckettian. And among its various meanings is “literature aimed at revealing the way humankind invests itself in cultural structures and supports—literature, marriage, etc.—all of which inevitably fail,” exposing “how fragile these sustaining beliefs are.”

That’s the judgment of Jonathan Boulter on the ironically named Happy Days, a play by Samuel Beckett and one of the works explored in his Beckett—A Guide for the Perplexed, a comprehensive overview of the Irish dramatist, novelist, poet, and short story writer. Boulter’s take on Beckett is informed and provocative, though readers of this helpful volume should know it also relies heavily on the work of thinkers and theorists such as Martin Heidegger, Sigmund Freud, Jacques Derrida, and Jacques Lacan. Readers should, therefore, be prepared to tread some fairly deep philosophical waters occasionally. But this is Beckett, after all, a writer who took literature “as close as possible to the post-human condition.” Boulter, a professor of English at Western University, London, Ontario, is generally successful in unpacking for the reader some pretty chewy concepts, convinced that “deconstructionist psychoanalysis is the best way of proceeding with Beckett.”

The book is divided into two parts: drama, and prose. The dramas—especially Waiting for Godot, far and away Beckett’s best-known work—constitute Beckett’s quest for what he called “literature of the unword,” an attempt to use silence, gesture, and tableau to communicate the desperation of humanity’s dilemma: namely, that we’re all fated to go through life asking the questions we’ll never be able to answer. The only palliative available is not to articulate the questions at all. After reviewing all the major works of drama and prose, Boulter’s somber but intriguing conclusion is that “Beckett is a writer who wishes to eliminate the very thing—language—which defines him vocationally,” adding that Becket’s career can be seen as “a kind of sixty-year suicide attempt.” In Boulter’s reading of Beckett, every act of literary creation is also an act of negation, and however earnest our quest to derive meaning from artistic utterance, in the end (to quote one of his famous tramps), there really is “nothing to be done.”

A slightly different take—but just as helpful and a tad more easily digested—can be found in Rónán McDonald’s The Cambridge Introduction to Samuel Beckett. McDonald, who holds the Gerry Higgins Chair in Irish Studies at the University of Melbourne, doesn’t spend nearly as much time sifting the philosophical stream for nuggets of meaning. In fact, his Beckett is a writer whose work self-consciously resists such attempts. In what must surely be a comfort to anyone who’s sat through a Beckett play or read one of his novels, thoroughly flummoxed, McDonald assures the reader that “to engage fruitfully with Beckett’s works does not necessarily mean to ‘decode’ them or to figure out what they really mean underneath the obscurity.” McDonald is much more interested in the ways the plays and novels resist interpretation.

His analysis of Godot is clear and compellingly argued, and will likely illuminate any reader’s future encounter with Beckett on the stage. McDonald asserts that Godot is filled with lots of sly references to its own resistance to interpretation, and the dozens of allusions to theatre within the play are intended to remind the audience that what they’re watching is a false construction, a fruitless pantomime of meaning. He points out that the “meta-theatricality” of the plays, their numerous references to the theatre, create a kind of funhouse mirror “not seeking to reproduce real life in the manner of naturalist drama.”

He takes a similar approach to the novels, exploring how each work purposefully keeps the reader at arm’s length, denying even the basic pleasures of plot, character, or setting. In denying such fundamental narrative components, Beckett forces the reader to pay close attention to what’s not there rather than what is there, destroying in the process any notion of realism. Instead, Beckett’s prose “flaunts its own textual and constructed nature,” prohibiting any suspension of disbelief and reminding the reader that words that purport to offer clarity or closure are just that: words, not truths. In both McDonald’s and Boulter’s reading of Beckett, words are seen as the problem, as deceiving and ultimately meaningless as the “real world” they are supposed to represent. McDonald concludes his book with a discussion of a wide swath of critics’ words about Beckett, a detailed and reader-friendly overview of the shifting critical attitudes towards Beckett during the last fifty years.

That panoply of interpretation gets ample illustration in Samuel Beckett: Bloom’s Modern Critical Views. Introduced and overseen by the eminent critic and Sterling Professor of Humanities at Yale, Harold Bloom, this book—like the dozens and dozens of others which bear Bloom’s imprimatur—is a mixed bag, with no defining theoretical or critical school dominating its perspective. Instead, the collection covers the plays and prose with a divergent critical eclecticism. Bloom contributes a more lengthy introduction than is the norm for most of these volumes (Beckett has always been one of his favorite writers and seems to bring out some of Bloom’s most impassioned writing, right up there with Shakespeare, Joyce, and Whitman), focusing on the plays Waiting for Godot and Endgame, which Bloom calls “a larger play than any dramatist has given us this century.” The nine essays that follow the introduction are traditional academic essays, sometimes sounding like they are being written more for the professoriate than a general readership but they do provide a useful kaleidoscope of contemporary Beckett criticism.

And that criticism touches on everything from the influence of radio/tv/film in shaping his work (Martin Esslin’s “Telling It How It Is: Beckett and the Mass Media”), the role of the unconscious in Beckett’s work (“The Language of Dreams: The Anatomy of the Conglomerative Effect” by Lois Gordon), and even the writer’s preoccupation with colons, question marks, and other enigmatically employed punctuation (Hersh Zeifman’s “The Syntax of Closure: Beckett’s Late Drama”). One of the most illuminating essays—that is, one whose conclusions should help readers confused or put-off by Beckett’s signature lack of definitiveness, is Enoch Brater’s “Beckett’s ‘Becket’: So Many Words for Silence.” Brater notes:

An Irish writer of the mid-twentieth century, Beckett inherits a tradition of the half-light, the gloaming, a liminal world that is always on the verge of being recovered in some unspecified elsewhere halfway between perceived silence and arrested speech.

That perceived silence, or what Brater calls “the verbal equivalent of solitude,” is one of Beckett’s trademark qualities, and the essay does a good job of showing how such silences appear in works as diverse as Shakespeare and BBC radio dramas—both of which influenced Beckett’s mature style.

We readers can be grateful that a writer so dedicated to encoding silence has inspired generations of critics with so much to say about his work.