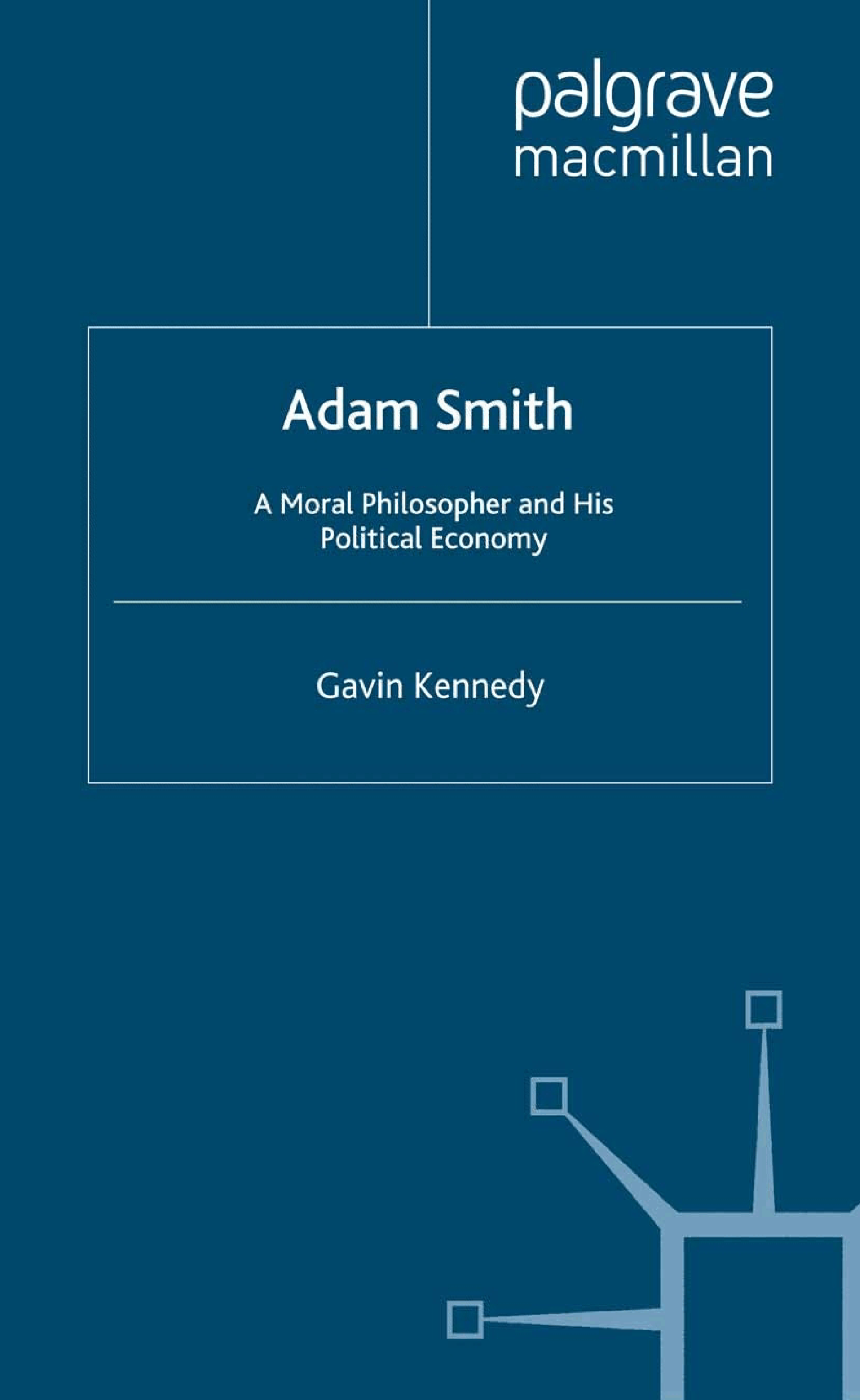 By re-examining Adam Smith’s theories as they were originally articulated, Gavin Kennedy, Emeritus Professor at Heriot-Watt University, Edinburgh, aims at nothing less than rescuing the authentic Smith from the distorted interpretations, assumptions, and attributions of modern economists. Having in subsequent publications criticized scholars for partial and misleading citations from Smith’s work as a means of validating their own theories, it is a task Kennedy is eminently suited to perform.

With short, snappy chapters that are thematically and sequentially coherent, Kennedy seeks to demonstrate that Smith’s original message was very clear but has been misused by ideologues of the Right and more surprisingly perhaps, also the Left. Judicious citations from Smith’s The Theory of Moral Sentiments (1759) and The Wealth of Nations (1776) provide a compelling dynamic to Kennedy’s narrative. The former was an essential conceptual and philosophical link towards the latter, and with his moral philosophy in mind, Kennedy claims Wealth of Nations as a philosophical treatise rather than an economics textbook, for Smith “directed his intellectual output at emphasising the mutuality of human conduct through chains of exchange relationships arising from the dependence of each person in society on the services of many independent others” (p.18).

Consequently, Smith’s earlier work developed ideas of empathy, interdependence, and harmony of interests, and how these values played out in society were highly significant in underpinning Smith’s political economy. The author considers the passage relating “the propriety of generosity and the deformity of injustice” vitally important in countering the misinterpretations of those who argue that Smith preached the supremacy of self-love and self-interest, and that his fundamental doctrine was “greed is good” (p.137). Kennedy devotes considerable time to developing and demonstrating two fundamental points. Firstly, that Smith was neither the purveyor of pure laissez-faire nor the ideological forerunner of the neo-classical Chicago School, and secondly that he advocated a fairer, equitable society, based not on redistributive mechanisms but by sharing future affluence from economic growth and higher employment.

The idea of Smith as an ideologue of non-interventionist economics has a long history from the Classical Economists and the Manchester School to Hayek and Friedman. Yet, historians of economic thought, notably Jacob Viner and Mark Blaug, have acknowledged that Smith was not a doctrinaire advocate of laissez-faire policies (p.183). Smith accepted the legitimacy of protective duties, in particular cases, and more widely did not oppose Government intervention on principle but opposed policies that undermined or obstructed free competition. He added that many obstructions were enacted at the behest of merchants and manufacturers lobbying for protection and monopolies, which Kennedy attributes to Smith’s moral philosophy leading him to support perfect liberty “pure and simple” without favoring any special interest rather than any Leftist bias.

With moral philosophy always in mind, Kennedy presents a lucid account of Smith’s political economy, demonstrating, contrary to Schumpeter’s criticism that Smith’s esoteric methodology and expositions led to his failure to cross “the scientific Rubicon” into modern economics, that Smith’s economic concepts are finely-honed and highly-nuanced. Smith based much of his economic theory on a sweeping analysis of historical development of the Economic Ages of Man, from antiquity through feudalism to the commercial age, in the process demonstrating how commerce was the harbinger and catalyst of political reform and far-reaching economic development. Kennedy demonstrates how Smith appreciated how historical context influenced the division of labor and the labor theory of value. In primitive societies, where labor was the only factor of production it was valid to claim human capital was the only source of value, but in a multi-factor economy, this was not applicable. Equally, surplus output driving the division of labor, leading to further specialization and a constantly-evolving supply chain, “the essential difference between rude and commercial societies” was applicable to a particular era (p.56). For Smith, neither concept was immutable but changed according to prevailing economic circumstances.

If economic growth and development were positive aspects of commercial society, mercantilism in all its regulatory, institutional, and legislative forms, was the enveloping negative feature. Domestically, mercantilist regulations fuelled high prices, under-stocked markets, and poor workmanship. Not only were these customary practices and legislative enactments economically inefficient but they also inhibited long-term economic growth, and breached natural liberty in preventing free mobility of labor and capital (p.188). Mercantilist restrictions made international commerce “the most fertile source of discord and animosity” between nations (p.136). However, Smith did not, as the English manufacturer and Liberal statesman Richard Cobden later did, envisage free trade as a panacea for the dissolution of international rivalries. Chartered Companies, monopoly rights, and colonial possessions were criticized by Smith primarily on account of misallocation of resources disrupting capital flows, and retarding capital accumulation.

The contemporary relevance of Smith’s work has led to much misunderstanding and misuse, most notably the Invisible Hand metaphor, used once by Smith in Wealth of Nations, to describe how intentional acts could lead to unintended consequences, some of which were beneficial, some of which were not. The metaphor was not intended as a definitive explanation of free-market operations, yet successive economists have propagated it as a “mystical principle” of how market forces promote beneficial outcomes. Even Milton Friedman described how it had been “more potent for progress than the visible hand for retrogression.” Clearly, these ideologically-charged representations are a distortion. Similarly, claims of disapproval of government intervention are easily dismissed. Instancing Smith’s proposals on education, justice, and capital projects of economic infrastructure, complemented by an official apparatus of “instruments of intervention,” and a sanctioned list of governmental duties, Kennedy convincingly argues that utility, not principle, governed his stance (p.176).

For Smith, wealth creation and capital formation were instrumental towards alleviating poverty. British working-class history in the nineteenth and twentieth century validates his perspective, for contrary to Marx’s predictions of working-class immiseration, rising real wages, and the general spread of opulence raised working-class living standards. Smith has also been attacked for failing to grasp how economies of scale contradicted the harmony of self-interest with the common good, but it has to be remembered that Smith never asserted that self-interested acts were universally socially-benign. This type of criticism indicates that the idea of the Invisible Hand universally guiding market forces towards positive outcomes is still widely and mistakenly advanced.

Adam Smith’s fame and prestige never rested on originality. Many others anticipated elements of his thought, and a cross-current of Scottish and European Enlightenment thinkers influenced his writing. More may have been made of these intellectual influences. Yet, while the author’s admiration for his subject is clear, he does not shirk from criticism, especially relative to Smith’s often casual periodization and imprecise dating. If valid criticism, it hardly detracts from the magnitude of Smith’s achievement. It is now not credible to claim as the American economist George Stigler did in 1975 that The Wealth of Nations was merely a “stupendous palace erected upon the granite of self-interest” (p.109). As Kennedy argues, it is this type of careless, incomplete, and selective reading and quotation which has led to the “largely invented image” of Smith as an advocate of laissez-faire (p.172). To his credit, Kennedy aims to eliminate these misconceptions, and his concise and highly-analytical account makes a substantial contribution towards re-appraising the practical content and ideological application of Smith’s output. The nature, vision, and scope of Smith’s work, buttressed by extensive original quotations and careful reading, are well-delineated, and linkages between Smith’s historical analysis of economic development and his examination of human behavior and motivation are finely-drawn. By restoring Smith to his rightful place as a philosopher who described the nature of society he examined and who sought ways to improve the lives of the people, Kennedy has gone some way towards re-locating Smith in his proper historical context and perhaps in the process has made him a less partisan and divisive figure.