MAIN MENU
Charlie Chaplin Film Interview
A pioneer in the world of cinema, the work of Charlie Chaplin defined the silent film era: while he was not the only master of physical comedy of the day, his Little Tramp character has become the best-known and most-beloved. He helped to stretch the bounds of filmmaking even before synchronized dialogue was added, doing more with the… 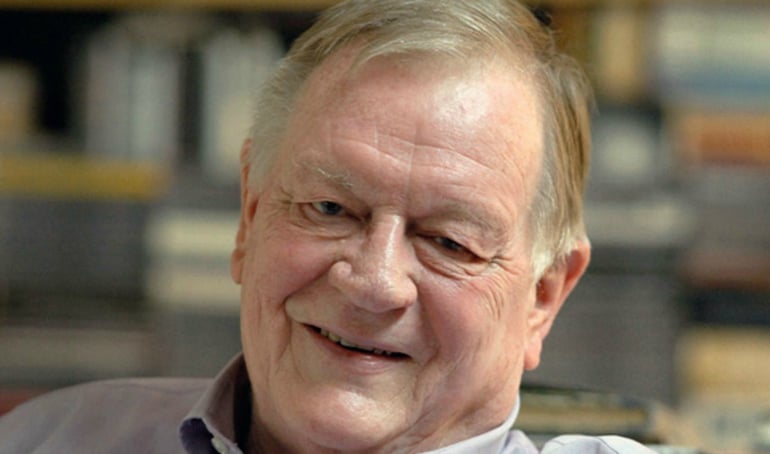 A pioneer in the world of cinema, the work of Charlie Chaplin defined the silent film era: while he was not the only master of physical comedy of the day, his Little Tramp character has become the best-known and most-beloved. He helped to stretch the bounds of filmmaking even before synchronized dialogue was added, doing more with the limited technology of the day than many would have done with twice as much. In addition to his work on-screen, he co-founded United Artists with Mary Pickford, Douglas Fairbanks, and D. W. Griffith, among the earliest filmmakers to seek creative control over their work in an industry that—then and now—has been dominated by financial types.

For more than 45 years, Richard Schickel has been a film critic, documentary filmmaker, and movie historian. He has written 37 books, has held a Guggenheim Fellowship, and has been recognized with numerous awards for his contributions to film history. A critic for Life and Time magazines for 43 years, he now reviews movies at Truthdig.com.

Among his many books, Schickel has written The Essential Chaplin: Perspectives on the Life and Art of the Great Comedian. He also produced a documentary about Chaplin, entitled Charlie: The Life and Art of Charles Chaplin.

Simply Charly: In your book, The Essential Chaplin: Perspectives on the Life and Art of the Great Comedian, you call Charlie Chaplin “the most famous man in the world” in his time. What do you think made him so universally popular, and what set him apart from other actors of his day?

Richard Schickel: Chaplin was present at the creation of the movies. He began appearing in them as they made the transition from short films to feature-length, which made him, along with Mary Pickford and Douglas Fairbanks, Sr., one of the movies’ first superstars. Film was, in those days, central to the creation of the modern celebrity system. The instant replication of star imagery in hundreds of prints circulated simultaneously all over the world made the famous more famous than ever much more quickly. And the ancillary celebrity media—newspapers, magazines, even merchandising—were also ready and waiting, at this moment, to amplify that imagery. Beyond that, Chaplin’s screen character had a universal appeal. He was an everyman with whom everyone could identify. Finally, the intellectual community took him up. He seemed to be an artist, which the movies had never had before, and he gave this new medium respectability and credibility it had not had before. The movies needed him almost as much as he needed the movies. Competitors would emerge in the 1920s, but he had been there first, and there was a richness and purity in his screen character that the merely beautiful, the merely sexy, could not match. Later, when his production pace slackened, and he was threatened by the arrival of sound, people remained as fascinated by his fame and by his struggles to assert himself in what was essentially a new medium.

SC: How did Chaplin “invent” the Little Tramp character, and his signature outfit of baggy pants, a cutaway coat and vest, large, worn-out shoes, and a battered derby hat?

RS: He always said he more or less instinctively grabbed the costume and props from what was around Mack Sennett’s studio. Maybe so. But in a lot of his early films, he experimented with different personae—a swell, a dandy, a drunk. It took him a few years to settle definitively on The Little Fellow. People liked him well enough when he was not playing The Tramp—he would have been some sort of (silent) movie star without that character. But that figure was lovable in ways that transcended mere stardom.

SC: Why did Chaplin refuse to make a talkie featuring the Little Tramp, even though the technological innovations made the transition from silent to talking films possible?

RS: The Little Fellow was a creature of silence. Chaplin’s genius—and he was assuredly a genius—was largely a kinetic one. He could say anything he needed to say through pantomime; he did not need words to get what he wanted to say across. So talking was superfluous to him. And given that his voice—rather thin and prissy—was antithetical to The Tramp’s character, sound was an option that justifiably frightened him. So though the mass public was enamored of sound, it was willing to cut him a break. The first films he made during the sound era were every bit as successful as his silent films had been.

SC: Why did he decide to “retire” the Tramp in Modern Times? Did he or the public have enough of the character?

RS: I don’t think it was a conscious decision. But The Tramp’s essentially Edwardian world was disappearing, replaced by industrialism, modernism, evil political forces—the very forces he satirized in Modern Times. It became increasingly difficult for him to escape down the open roads that had been available to him in his younger years. Also, by the late thirties and forties, he was a portly, middle-aged man, lacking the quickness and insouciance of his youth. He toyed with various ideas that would have brought back The Tramp. The Great Dictator was surely a close variant on The Tramp—but by this time he wanted to make grand philosophical statements, which required words. He was not good with them. He was verbose, repetitive, and unfunny. So I don’t think he was tired of The Tramp (and the public surely was not). He just seemed irrelevant to Chaplin’s changing body and priorities.

SC: How did Chaplin get along with other comedic film stars of his time, for example, Buster Keaton and Laurel and Hardy?

RS: He respected Keaton without being particularly close to him, as he was with other movie star peers. But aside from Doug Fairbanks, who was his best friend, he was not wildly interested in Hollywood celebrities. He was after much grander figures—Einstein, Churchill, et al.—people whose fame was not, as he saw it, merely frivolous.

SC: Is it true that Chaplin often inserted elements of his own life into his films and if so, which ones were the most biographical?

RS: In the largest sense, all of his work drew on his life. He had been living on the streets, on his wits, since his childhood as a virtual orphan in London and I’m sure that incidents from that life were incorporated, in embroidered form, in his films. For example, he perfectly reproduced the fence where he had courted his first serious girlfriend, for his meetings with the blind flower girl in City Lights. But it was the emotions he had felt, more than the places he had been, that informed The Tramp. It seems that The Kid is the film that most perfectly captures the child he had been. Jackie Coogan was the projection of Chaplin as a child, and the character Chaplin plays represents the loving parents—taken from him by death and madness—that he only briefly knew and all his life yearned for.

SC: By the same token, many critics say that the messages of Chaplin’s films were inseparable from his own convictions, which were openly liberal. Which of his films express Chaplin’s personal beliefs the best?

RS: Chaplin was no mere liberal. He was in his later years, a Stalinist, that is to say, he embraced totalitarian leftism. He sometimes spoke guiltily about having become a rich man by playing a desperately poor man. Most of his audience—with the exception of the lunatic right—forgave him his politics out of affection for his genius and the apolitical gifts that had endeared him to the world.

SC: Do we know what was Hitler’s reaction to being mocked by Chaplin in The Great Dictator?

RS: Hitler, of course, hated Chaplin and his films were banned in Germany from the earliest days of the Nazi regime. I doubt that Hitler saw The Great Dictator. The Nazi leader was convinced that Chaplin was a Jew (almost certainly not so) and Chaplin gave a great answer to that opinion. “I do not have that honor,” he said. There are people like David Thomson, the film historian, who insist that they were in some perverse sense kindred spirits—given their ability to manipulate the feelings of the mass audience. I’m dubious about that, given that Chaplin’s appeal was non-verbal, while Hitler’s was purely verbal, and given that their political views were diametrically opposite. They did share the historical accident of being born in the same week in the same year (1889) and, of course, there were those mustaches.

SC: What sparked your own interest in Charlie Chaplin?

RS: As a film critic and historian, I naturally knew much of Chaplin’s work, but in a rather casual way. He was not a passion of mine, probably because he achieved the height of his fame before I was born and because I am always dubious about sentiment in movies—indeed, in any kind of fiction. But in 2001, Warner Brothers acquired the rights to distribute Chaplin’s films and invited me to make a documentary film—a biography intended to reintroduce Chaplin to an audience that had, like me, rather lost touch with him in recent years. As I studied his work and talked to people who had known and worked with him, my admiration for his achievements rose radically. He was a difficult and not entirely agreeable man—I don’t think I would particularly have liked knowing him—but he was a great artist whose successes far outweighed his latter-day failures, and I now count myself among his more devoted admirers.

SC: Which of his movies are your favorites?

RS: The Kid, The Circus, and City Lights.