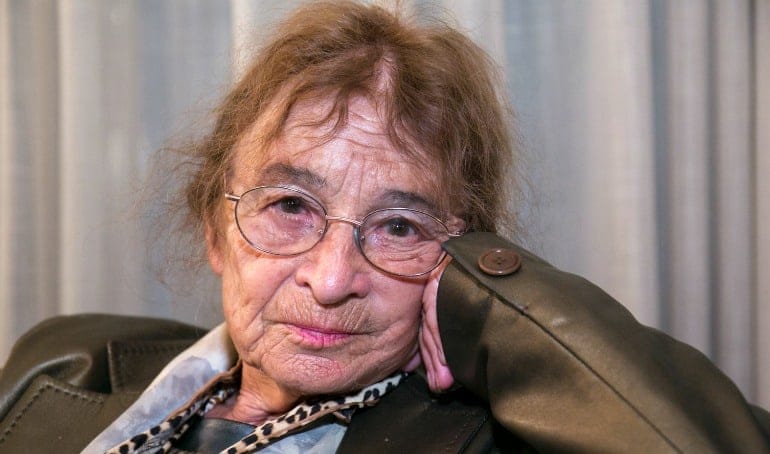 Karl Marx (1818–1883) was a German philosopher, historian, and revolutionary, whose social, economic, and political ideas laid the foundation of Communism.

Ágnes Heller is a Hungarian philosopher, author, and a visiting professor of Philosophy and Political Science at The New School for Social Research in New York.

Simply Charly: You were born in Hungary and have lived in both Australia and the United States. How does the scholarly discussion of Karl Marx vary around the world?

Ágnes Heller: The scholarly interest in Marx has changed due to historical developments, not based on geography. This interest reached its peak in the 1960s and 70s, which marked the time of many social and political reforms known as the “new left.” Currently, Marx is less fashionable than during those two decades, but his work is still frequently discussed in Western Europe, Australia, and America. Not so in Hungary, where the interest in Marx had become pretty marginal in the last 30 years.

SC: As a student at the University of Budapest, you planned to study physics, yet switched to philosophy. What inspired the change as well as your interest in Karl Marx?

AH: While studying physics, I once sat in on György Lukács’s class on the philosophy of history from Immanuel Kant to Georg Hegel. This experience changed my focus, with philosophy becoming one of the centers of my life. I called myself a Marxist because Lukács was a Marxist, and I was his faithful student. Yet, I called myself a Marxist without knowing his works, except for the first volume of Capital and The Communist Manifesto.

SC: The late György Lukács was a prominent Hungarian Marxist humanist under whom you studied. How do these two schools of thought, humanism, and Marxism, fit together? How do Marxist humanists interpret the economist’s work?

AH: Lukács never called himself a “humanist” at all. I do not know, even now, what this term means. If it means to respect human dignity, then I am one. If it means that I must love and embrace humankind, then I am not. In fact, during the vicissitudes of my life, I learned not to be any “ist” at all: not a Marxist, humanist, structuralist, postmodernist, or feminist. In my youth, when I called myself a Marxist (not a humanist), I was interested in Marx as a philosopher, not in Marx as an economist.

SC: The Budapest School, a research collective you helped form, sought to reinterpret Marxism.  In what ways were you rethinking his philosophy, and how was your work received by the Marxist community in Hungary and abroad?

AH: At the Budapest School, the members of our group of friends interpreted Marx, not Marxism per se. György Márkus wrote a classical book on Marx’s anthropology, and I wrote a book on Marx’s theory of needs. We were, I repeat, rethinking Marx, not Marxism. There was no “Marxist community” in Hungary; there were only the servants of the Communist government, who called themselves “Marxist-Leninists” to keep their jobs. And then there was our group—a marginal opposition that tried to address essential philosophical problems while being inspired by Marx. Yet outside Hungary, for example in Korcula, an island off the coast of Croatia (formerly Yugoslavia), I met several interesting leftist theorists and Marxists during Summer School sessions in 1965, 67, and 68. It was then that I became a participating member of a so-called “community.”

SC: Marx and Friedrich Engels wrote a few books together, including The German Ideology and The Holy Family. What was the working relationship between the two men?

AH: Marx was a significant scholar, whereas Engels just a dilettante. Anyhow, Holy Family is a poor book that Marx himself admitted. German Ideology has only one significant chapter, the one on Ludwig Feuerbach, written by Marx. Engels was a good friend of Marx, a free spirit, but his works (Except the Conditions of the Working Class in England) are not worth reading.

SC: While attending the University of Berlin, Marx became involved with a group known as the Young Hegelians. Framing their arguments with the philosophy of Georg Wilhelm Friedrich Hegel, these young radicals called for bourgeois reform in Germany. How did Marx’s participation in this group shape his later views and work?

AH: The dissolution of the Hegelian philosophy, in which Marx participated, signified the end of metaphysical systems. This development put philosophers before a difficult task: how to preserve philosophy but use another, non-traditional language to express philosophical thoughts. Also, the idea that philosophy has to become science, or at least appear as science, gained momentum in Marx’s lifetime. Marx was the product of his times; therefore, after the first strictly philosophical writings of his youth, (Economic and Philosophic Manuscripts), he started to develop the philosophical critique of economy, which he presented as a new kind of science—just as, in his later years. Sigmund Freud developed a new philosophy of the psyche, clad as science. These two giants, these radical philosophers of the 19th century, changed our understanding of the world.

SC: Aside from Hegel, what other philosophers did Marx study, and how did they shape his early views?

AH: When a journalist asked Marx who his favorite philosopher was, he answered, “Diderot.” Denis Diderot had not influenced Marx but was a fellow spirit, whom he read with great pleasure. He was, however, influenced (just as Søren Kierkegaard had been) by Hegel and Feuerbach.

SC: Prussian-born Marx lived in Berlin, Paris, Brussels, and London during his most active years. How did the political and economic situations in these major cities shape his views?

AH: Marx was born in the Rhineland, in the most “European” corner of the German-speaking world, into a converted Jewish family. Perhaps that is why his works combine classical German philosophy and Messianism. He remained a German philosopher wherever he went and wherever he stayed. With the exception of a few years of his activity in the International Workingmen’s Association, he spent his time mostly in the library of the British Museum and with his family, working on books and writing letters. He was (or became?) a Victorian gentleman. His interest in British politics, however, was negligible. All the booklets he wrote in London about political issues covered developments in France or Germany. His English language political analyses were mostly written by Engels, who was far more interested in both British and American politics and development than Marx.

SC: Since Marx’s death in 1883, how has Marxism evolved? How do you think Marx would feel about the state of Marxism in the 21st century?

AH: While alive, Marx protested against being a Marxist. As he said, “I am not a Marxist, I am Karl Marx.” Marxisms (in plural) are very different receptions of some aspect of Marx’s oeuvre. His work had been plundered by different people for different purposes. After his death, he obviously could not defend himself against any “Marxist” interpretations by various sociologists, economists, literary critics, as well as political parties and movements. The Marx of Rosa Luxemburg, Karl Kautsky, Otto Bauer, Vladimir Lenin, Joseph Stalin, Karl Mannheim, György Lukács, Antonio Gramsci, and Slavoj Zizek was not one and the same, because of diverging interpretations. Many of these “Marxists” invented “dialectical materialism”—a stupidity that Marx had never expressed, and they constantly referred to “capitalist society,” a term that Marx used only once. Marx continues to be misinterpreted to this day.

SC: Do you think that Marx’s legacy has been obscured by the failure of Communism?

AH: The use of Marx to justify “Marxist” ideology by totalitarian regimes shrouded his work in suspicion. Yet, I may add, also the enemies of Soviet totalitarianism referred frequently to the same “true” Marx. The story continues. As much as Plato is always reinterpreted—irrespective of the fact that his ideal city-state, “politeia” is not only unrealizable but also undesirable—so is Marx’s philosophy.