MAIN MENU
Interview Isaac Newton Physics
An English physicist, mathematician, and covert alchemist, Sir Isaac Newton (1643-1727) was the greatest scientific mind of his era. He laid foundations and made significant contributions to classical mechanics, optics, calculus, as well as laws of motion and universal gravitation. One of his books, Principia, in which he outlined mathematical principles relating to natural philosophy and his system of the… 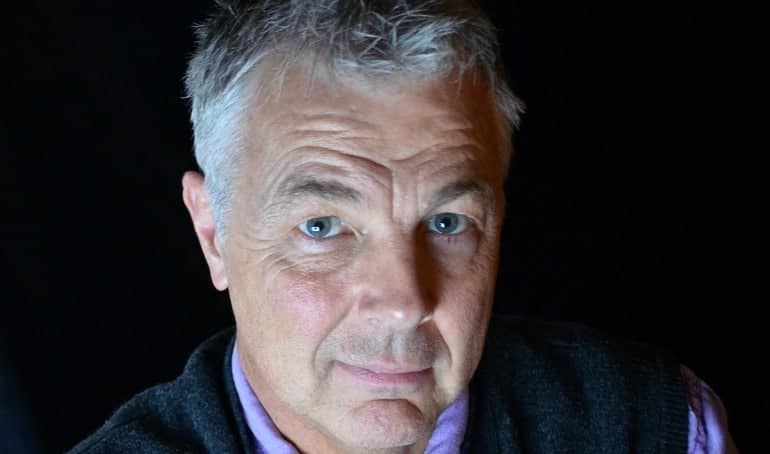 An English physicist, mathematician, and covert alchemist, Sir Isaac Newton (1643-1727) was the greatest scientific mind of his era. He laid foundations and made significant contributions to classical mechanics, optics, calculus, as well as laws of motion and universal gravitation. One of his books, Principia, in which he outlined mathematical principles relating to natural philosophy and his system of the world, is considered to be the most significant publication in the history of science.

A former member of the now-disbanded British New Wave pop group, Thompson Twins, Michael White is a bestselling author of 38 books, including Isaac Newton: the Last Sorcerer, an account of not only Newton’s scientific achievements, but also his hidden pursuit of alchemy, as well as his cruel personality.

Simply Charly: How does a former member of one of the most successful bands of the early 1980s—The Thompson Twins—transform himself into a globally best-selling author with a predilection for writing popular science books on Galileo, Newton, Einstein, and Hawking? How and when did you reverse course?

Michael White: I’m often asked this question, and my pat answer is that it is not as extreme as going from a pop group to being Prime Minister of Britain as Tony Blair did.

The fact is, I always wanted to be a writer, and I was writing my earliest (unpublishable) fiction when I was touring with the Thompson Twins. I became involved in music at school and played in various university groups at King’s College in London, where I studied Chemistry. I had serious ambitions to go on after I left the band, but I changed course and started to do some popular science writing. I then became a lecturer and wrote when I could. The big break was writing the biography of Stephen Hawking with John Gribbin. When the royalties came through for that, I left teaching and have been a professional author ever since.

SC: In your critically acclaimed book, Isaac Newton: The Last Sorcerer, you deal very heavily with Newton’s interest in mysticism and the occult. What sort of impact did this have on his life?

MW: I would say it was a central feature of Newton’s life. As I say in the book, Newton held the conviction that all knowledge was relevant and open to exploration. He was, of course, aware that becoming involved with occult studies and practices such as alchemy was dangerous. If he had been exposed as a necromancer (a person who communicates with the spirits of the dead), it would have not only destroyed his career, but he may have faced execution as well. So obviously, he kept it a secret. However, during his lifetime he wrote approximately a million words on alchemy, which is more than he wrote on science or mathematics.

SC: Newton frequently came under fire for supposedly opposing the Church, yet he was also said to have been a devout Christian in his own way. Given his occult interests, what would you say Newton’s religious leanings really were?

MW: He was a pious Christian, a puritan in fact. However, he saw no disparity in holding conventional strict religious views whilst researching occult practices. He was driven by an overwhelming urge to learn and to understand how the universe worked. He saw it as his religious duty to do this. He believed he had been chosen to unravel the mechanism of how the universe worked by God. He considered himself a unique genius.

SC: Newton’s Philosophiæ Naturalis Principia Mathematica is considered one of the most important scientific texts ever written. What sort of impact did it have on his contemporaries? Or, as it employs very challenging mathematics, was it even understood?

MW: It was understood by his scientific contemporaries and discussed at great length at the Royal Society where he was President. Some of his contemporaries contested some of Newton’s assertions. He had many powerful enemies, including John Flamsteed and Robert Hooke. Yet, Newton’s ideas were seen immediately as a huge step forward and the Principia was immediately accepted as a great work that explained many aspects of how the universe operated and gave a mathematical foundation for ideas that had only been glimpsed at before.

SC: The image of Newton being inspired to write his theory of gravity by an apple falling from a tree is a popular one. How accurate is this version of events? And what exactly was Newton’s brainstorm regarding gravity?

MW: It is largely a myth, which Newton created around himself. He was indeed at his mother’s house in Grantham in 1665 because Cambridge was in the grip of a terrible plague. There was a small orchard near the house, and ‘the tree’ is still there. He may well have sat under this tree thinking about gravity, but the idea of the apple falling is a cozy little story. In fact, Newton confessed to Voltaire late in life that he had made up the incident. He did this because it was a convenient cover story to deflect from the true inspiration that led to his interpretation of universal gravitation—a combination of mathematics and alchemy. Practicing alchemy was a crime punishable by execution, so Newton had to do everything he could to allay suspicion.

SC: Aside from his universal law of gravitation, what other major contributions to science did Newton make?

MW: Newton elucidated the Three Laws of Motion, which define mathematically how all things move in a non-relativistic universe. This work was tweaked by Einstein some two centuries after Newton’s death. These laws were stated in Newton’s first masterpiece, The Principia.

In his second great work, Opticks, Newton set down a host of rules and laws explaining the behavior of light. He produced an incredibly sophisticated lens and was the inventor of the reflecting telescope.

As well as this, Newton created a version of the calculus, which was enormously important to him in his mathematical work explaining gravity, optical phenomena, and laws of Mechanics.

SC: Who would you say were some of Newton’s most prominent influences?

MW: Newton was influenced more by ancient mystics and alchemists than by scientific contemporaries. He was a great admirer of Galileo’s work, which really laid the foundations for his own studies in both mechanics and optics. Around the age of fifteen or sixteen, he inherited a large library of books and studied them avidly. The library included the works of many great thinkers such as Descartes, Galileo, Tycho, and Roger Bacon. These people played a major role as an intellectual grounding for him.

SC: There remains some controversy about the relationship between Newton and Robert Hooke—some accuse Newton of using some of Hooke’s ideas without assigning due credit. Would you say there’s anything to these accusations?

MW: Newton was an abrasive, deeply unlikeable man, an obsessive who had no qualms when it came to gaining an intellectual foothold. He believed God chose him as a once-a-millennium conduit. He thought he had a direct link to God and was the divine mouthpiece. As a consequence, he would not turn away from any opportunity to take what he believed to be rightfully his. He saw Hooke as a second-rater. The same may be said for the way he felt about the Astronomer Royal, John Flamsteed, and most famously, Gottfried Wilhelm von Leibniz. So, yes, I think there is every chance Newton stole from Hooke.

SC: Another controversy concerns the priority dispute with German mathematician and philosopher Gottfried Wilhelm von Leibniz over who rightfully invented the calculus. Can you describe the circumstances of this controversy?

MW: Newton claimed (erroneously) that Leibniz had stolen the idea of the calculus from him. In fact, what happened was that the two men had each independently arrived at the mathematical technique more or less simultaneously, and each had no idea what the other was working on. As I said before, Newton believed he was sent by God to interpret Nature. He believed he was in a league of his own and every other scientist or philosopher, living or dead, was inferior. He could not accept the idea that God would have shared the revelation of the calculus to another at the same time as it was revealed to him. Leibniz, he concluded, was a liar and a thief.

The fight lasted 35 years. Leibniz died before Newton, but Sir Isaac continued to attack his rival publicly even after Leibniz‘s death.

SC: Newton was reputed to have terrorized his underlings during his later years. What would you say his personality was like during this period?

MW: I think the answers above give some clues! He was a person greatly damaged by childhood trauma. He was a sociopathic egomaniac. He only ever had two friends—one was John Wickins, his roommate at Cambridge, the other was a much younger mathematician Nicolas Fatio de Duillier with whom he had an intense sexual relationship. As Newton grew older, he did not mellow. He became Master of the Royal Mint. He attended every execution of fraudsters and counterfeiters even though it was not part of his job description, and he pushed through as many charges of High Treason as he could (as opposed to mere Treason). Treason meant hanging, but those found guilty of High Treason were hung drawn and quartered.

SC: What is Newton’s legacy today? Why are we still interested in him 300 years later?

MW: Even though he was a very unpleasant human being, he was a great genius. He is rightly remembered as being the most influential scientist in history. His work laid the foundations for the Industrial Revolution, which led to our modern technological world. When the Apollo missions were sent to the moon, Newtonian mechanics was used to plot their courses. Lasers were developed thanks to Newton’s laws of optics. And, although Leibniz’s form of the calculus is the system we use today, when Newton hit a wall trying to devise his laws of motion, he invented a technique with which to solve the problem—his version of the calculus.

But perhaps, above all else, and in spite of his corrosive personality, Newton was the model for the Age of Enlightenment, which started when he was elderly. He is really the embodiment of the pure scientist and mathematician and a man who dedicated most of his life to learning and the advancement of understanding.