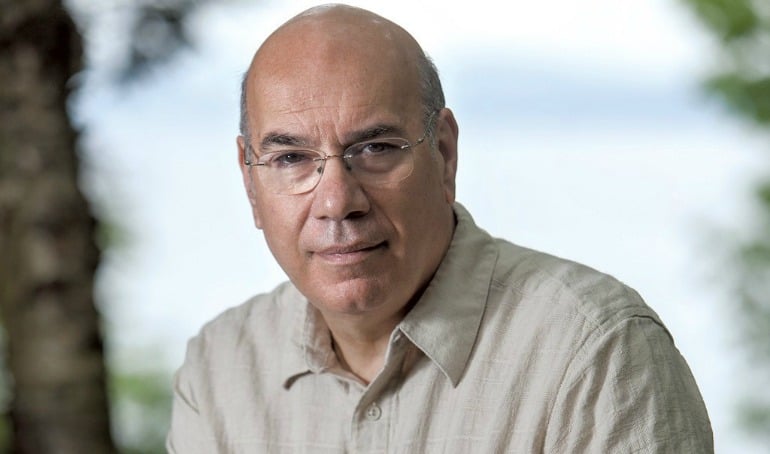 Pulitzer Prize-winning author (for his 1939 novel, The Grapes of Wrath), American writer John Steinbeck (1902–1968) was also awarded the 1962 Nobel Prize in Literature for his literary contributions.

Professor of English literature and creative writing at Middlebury College in Vermont, Jay Parini is also a poet, novelist, and biographer who authored over 20 books.

Simply Charly: In recent years, there have been a handful of good biographies written on John Steinbeck. What prompted you to write your own biography John Steinbeck: A Biography?

Jay Parini:  I wrote this book at the request of my friend, John’s widow Elaine Steinbeck. A new British edition of his works was forthcoming, and they wanted a biography to go along with it. So I backed into this project.

SC: Part of what made Steinbeck such a captivating writer was his use of social commentary as well as political and philosophical themes: many of his works addressed the plight of the working class and financial inequality in America. Would you say that the political themes in Steinbeck’s novels are still applicable and relevant today?

JP: Probably the issues remain relevant. He dealt with issues of cultural displacement, homelessness, the struggles of class—especially in his great works of the 1930s. I don’t think his later work measures up to the earlier one.

SC: John Steinbeck: A Biography was written over the course of four years, during which you visited the many locations where Steinbeck lived and wrote about in his novels. Why was it important to you to visit the places of Steinbeck’s residence firsthand, and what did you take from the experience?

JP: I loved seeing and getting to know Steinbeck’s places: his houses, the natural areas he walked, and so forth. I got a sense of the whole world he lived in, breathed, and made his own in his fiction. This is, of course, mainly relevant for the great California novels and stories.

SC: Some of Steinbeck’s novels (Tortilla Flat and Cannery Row in particular) were influenced by Arthurian legends he was introduced to at a young age by his aunt, Molly. What other forms of literature and mythology did Steinbeck draw on for influence in his writing? Who were his main literary influences?

JP: I would say Steinbeck got his ideas about literature from reading English and American fiction, from Dickens and Hardy to Twain and Dreiser. He was a voracious reader, and he immersed himself in great works of literature. Certainly, myth interested him, and he was a friend of Joseph Campbell, who was a great student of mythology.

SC: Steinbeck often wrote sympathetically about characters with mental illness, most famously the character Lennie Small in Of Mice And Men, and you speculate in your biography that he may have identified on some level with these characters. Would you say that Steinbeck’s own antisocial behavior and emotional instability influenced his portrayal of the mentally ill? If not, what led him to focus on this subject in his writing?

JP: I think Steinbeck did feel unstable at times—he drank too much and this further de-stabilized him. So yes, he did identify with those who had a mental illness. I think he was especially sympathetic to people with problems.

SC: Many reviewers believed that Steinbeck’s career peaked after the 1939 publication of The Grapes of Wrath, one of his earliest works. What is your assessment of Steinbeck’s post-Grapes work?

JP: I used to have more enthusiasm for post-Grapes writing. But I now think that the decade of the 1930s was his best time. In retrospect, I find the later work rather forced and uninteresting. I wouldn’t want to re-read it. But I do re-read his stories and novels of the 30s with real pleasure.

John Steinbeck
SC: In your opinion, what was it about Steinbeck’s writing that captured the public’s imagination? What aspects of his novels and stories mark them as being distinctly American?

JP: I think his vivid sense of California, as well as his understanding of working and struggling people, caught the interest of readers in the US and worldwide.

SC: Although his books continue to sell over a million copies each year, John Steinbeck receives scant attention today, except for a few academics, as an important literary figure in the same league as Hemingway, Faulkner, and Fitzgerald. Why do you think this is so?

JP: Steinbeck seems simplistic next to Faulkner, and he seems rather naïve next to Hemingway. He doesn’t have the silken poetic prose of Fitzgerald. He is rather a homely and boyish writer. I don’t think any of this plays well among sophisticated critics. There is not much to deconstruct in his work.

SC: In 1962 John Steinbeck was awarded the Nobel Prize for Literature “for his realistic and imaginative writings, combining as they do sympathetic humor and keen social perception.” Yet, some critics at home felt that he was undeserving of such an honor. Indeed, one critic, Arthur Mizener, wrote a scathing article for The New York Times entitled “Does a Moral Vision of the Thirties Deserve a Nobel Prize?” Why were so many critics hostile toward Steinbeck?

JP: I think his success with readers annoyed these critics. And I do think that Steinbeck didn’t match Hemingway or Faulkner for literary quality or intensity of imagination.

SC: Steinbeck had an unusually successful relationship with Hollywood, unlike such authors as Faulkner and F. Scott Fitzgerald, who “wanted more from Hollywood than Hollywood wanted from them.” How did Steinbeck’s approach towards the film industry differ from other novelists of the time? Where do you feel that the early screen adaptations of Steinbeck’s novels fit into his overall legacy?

JP: Steinbeck’s stories are solid, and they unfold at a pace that works on screen.  His writing is very cinematic, in other words. So there have been wonderful adaptations of The Grapes of Wrath, Of Mice and Men, and East of Eden. Steinbeck was lucky in these productions, which were done by first-rate directors and starred just the right people. They’re good films. Faulkner and Hemingway were not so lucky. Nor was Scott Fitzgerald.