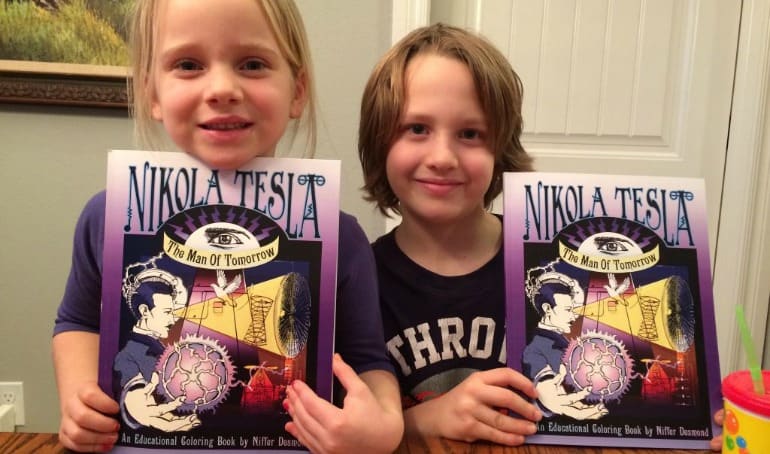 Brilliant inventors Thomas Edison and Nikola Tesla (1856–1946) had been rivals during their lifetimes and, all things considered, the former is probably more of a household name than the latter.

But while Edison had a town in New Jersey named after him, Tesla’s legacy is as significant and enduring. After all, the Serbian-born inventor, who created the induction motor and alternating-current (AC) power transmission, has the American car, the electric Tesla, named after him.

As the automaker’s website explained it, “Without Tesla‘s vision and brilliance, our car wouldn’t be possible. We’re confident that if he were alive today, Nikola Tesla would look over our 100 percent electric car and nod his head with both understanding and approval.”

Given Tesla’s interest in electrical and mechanical engineering, the statement is probably correct. But would he be just as pleased with another recent “invention” bearing his name—a new coloring book, appropriately titled “The Man of Tomorrow.”

According to the promo, “This coloring book brings Tesla to life, beautifully illustrated with anecdotes ranging from mystical childhood experiences to his days in the high rolling world of industrialism. In addition to drawings, there are word hunts and mazes, with inspirational quotes from Tesla himself.”

However, the book’s author, Niffer Desmond has encountered the same stumbling block that Tesla himself was no stranger to: lack of funding to bring her project to fruition. She has just launched a Kickstarter campaign “to complete and release the book in style.” To date, over $4,000 of the $6,396 Desmond is seeking has already been raised.

History doesn’t tell us whether Tesla was a fan of coloring books, but we do have some indication that, in the very least, he would appreciate the author’s dogged attempts to get this work published. As he once noted,  “I do not think there is any thrill that can go through the human heart like that felt by the inventor as he sees some creation of the brain unfolding to success.”

This statement could apply just as well to the induction motor as to coloring books.