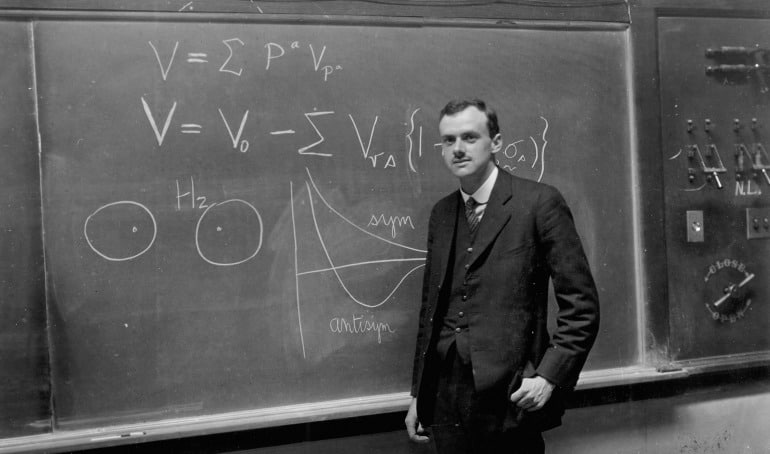 Odd Man Out: The Quantum World of Paul Dirac

Many geniuses have a reputation for being eccentric and socially awkward, and British quantum theorist Paul Dirac (1902-1984) fit both categories.

“Dirac acquired fame not only for his contributions to physics but also because of his peculiar personality, including features such as abnormal reticence and taciturnity. He lacked the social skills that most people have.”

Still, there is no doubt that Dirac, whose birthday is on August 8, had a brilliant mind. In 1933, he was one of the recipients (along with Austrian physicist Erwin Schrödinger) of the Nobel Prize in Physics “for the discovery of new productive forms of atomic theory.”

As the Nobel Committee explained it, “During the intense period of 1925-26 quantum theories were proposed that accurately described the energy levels of electrons in atoms. These equations needed to be adapted to Albert Einstein’s theory of relativity, however. In 1928 Paul Dirac formulated a fully relativistic quantum theory. The equation gave solutions that he interpreted as being caused by a particle equivalent to the electron, but with a positive charge. This particle, the positron, was later confirmed through experiments.”

But Dirac’s interests went beyond science and mathematics. He was an intrepid traveler and visited many countries and regions of the world, long before mass tourism became prevalent.

As Kragh tells it, “Since his first travels abroad to Denmark and Germany he developed an insatiable appetite for travels which he often combined with long hiking tours … Many of them were connected to conferences and lectures, while others were vacations unrelated to physics. His idea of a vacation, though, was not relaxing at a resort hotel near a sunny beach. More typically it involved long and strenuous walking tours in difficult terrain.”

Perhaps it was during one of his nature hikes that Dirac realized science and beauty go hand-in-hand. “Pick a flower on Earth,” he said, “and you move the farthest star.”

And that is an eloquent statement for a taciturn genius.