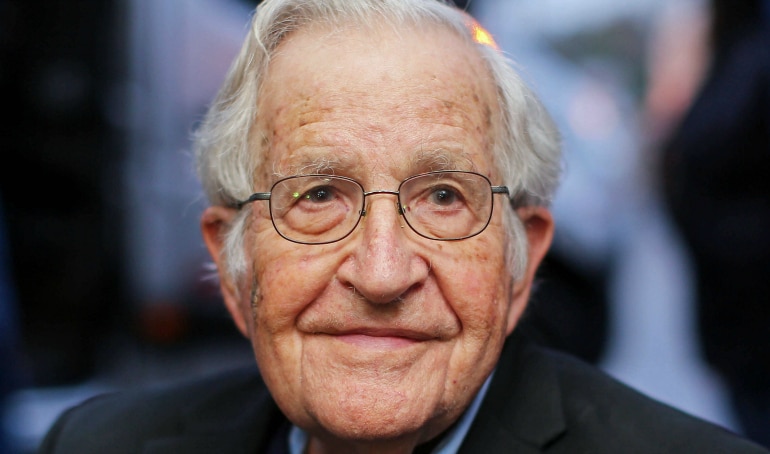 American intellectual Noam Chomsky is 92 years old today. Sometimes during his long life, he has said things that are remarkably obvious. Some people find these statements refreshing, while others are horrified. Here are two examples.In 1965, in his book Aspects of the Theory of Syntax, Chomsky wrote:

Linguistic theory is concerned primarily with an ideal speaker-listener, in a completely homogeneous speech community, who knows its language perfectly and is unaffected by such grammatically irrelevant conditions as memory limitations, distractions, shifts of attention and interest and errors (random or characteristic) in applying his knowledge of language in actual performance.

There was a storm of protest. People rushed to point out that no such ideal speaker-listener exists, that no speech community is homogeneous, that no one knows a language perfectly, and that these limitations discredited all of Chomsky’s scientific work.

In fact, Chomsky was simply spelling out what every linguist takes for granted. I have in front of me a simple introductory book about Swahili. The book lists various rules which are said to be part of the grammar of that language. If I were to record a speaker of Swahili, I would no doubt find false starts, deviations from rules, changes of plan in midcourse, and other oddities that the book says nothing about. But clearly, it would be ridiculous to expect the book to say anything about such matters. The perfect Swahili described in the book is an idealization of what actually happens. The quirks and speech difficulties of individual speakers vary so much from person to person, for reasons which have little or nothing to do with language, that books about Swahili simply ignore them. The same is true of virtually any description of any language.

Here’s another example. For the past month, commentators have been struggling to explain why Joe Biden didn’t win by a landslide, as the polls predicted. Over seventy million Americans voted for Trump. Was it The Donald’s economic policies? Was it racism? Do they not understand the damage Trump has done to their lives? Here’s what Chomsky wrote in his 2017 book, Requiem for an American Dream:

Every time Trump makes a nasty comment about whoever, his popularity goes up. Because it is based on hate and fear. The phenomenon that we are seeing here is “generalized rage.” Mostly white, working class, lower-middle-class people, who have been cast by the wayside during the neoliberalism period. They’ve lived through a generation of stagnation and decline. […] There is no economic growth for them, there is for other people. The institutions are all against them. They have serious contempt for institutions, especially Congress. They have a deep concern that they are losing their country because a “generalized they” are taking it away from them.

The Democrats, notably Bill Clinton and Barack Obama, did almost nothing about this. Chomsky has shown throughout his political work that the Democrats have served corporate power in a similar way to the GOP. Enough people were disgusted by Trump’s crude bullying to remove him from the White House, but not enough people were so excited by Biden’s policies that they swept him and Kamala Harris into power. Over eighty million people chose not to vote—no doubt aware at some level that the election would make little difference to their lives.

Simple truths from Chomsky help us understand the world.