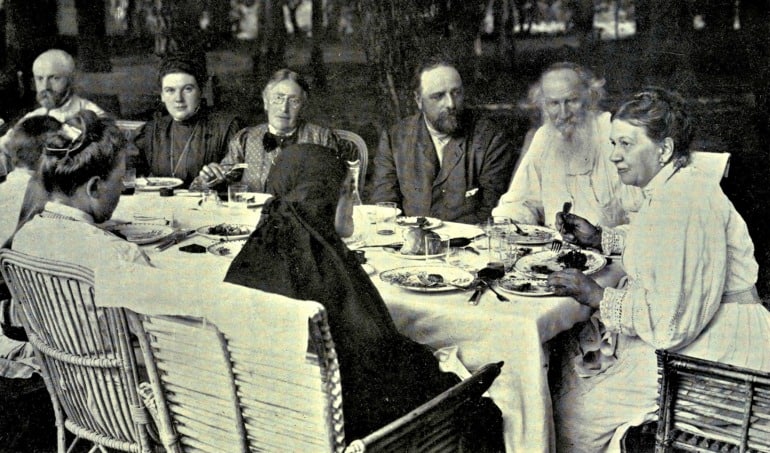 Family Ties: Separated by War, Together Again in Peace

In Simply Tolstoy, which is part of Simply Charly’s Great Lives book series, author Donna Orwin talks about Leo Tolstoy’s (1828-1910) extensive network of relatives and explores his ideas about the importance of family.

The renowned author and social reformer could not have known that seven years after his death, in the aftermath of the Russian Revolution, his once close-knit family would be scattered, imprisoned and exiled.

Last November marked the 100th anniversary since the Bolsheviks came to power, prompting the Tolstoys, along with many other members of Russian nobility, to flee the country.

Because of this separation, contact among the Tolstoy siblings and cousins was nearly impossible. But since 2000, the clan has been returning to its roots—the ancestral estate at Yasnaya Polyana (about 124 miles south of Moscow), where the author and his family had lived for many years.

Embed from Getty Images
That is where Tolstoy’s surviving descendants—currently about 300 of them—have been holding summer reunions every two years, as they did again this past August 2018.

During the gathering, the family members take part in a number of activities which celebrate both their roots and diversity.

They are known to play what they call the “Genetics Game” where they compare their appearances to that of their shared ancestor to see who bares the most resemblance to him. They also hold a Tolstoy soccer tournament with each team representing a different branch of the family.

Many of the descendants are working to preserve their ancestor’s legacy. For instance, his great-grandson Vladimir Tolstoy, 54, who started the biennial reunions, is the director of the Tolstoy Museum at Yasnaya Polyana.

The reunions are fitting tributes to the famous author, who had 13 children (nine of whom survived infancy and childhood) and wrote about family values in his novels, War and Peace and Anna Karenina among them.